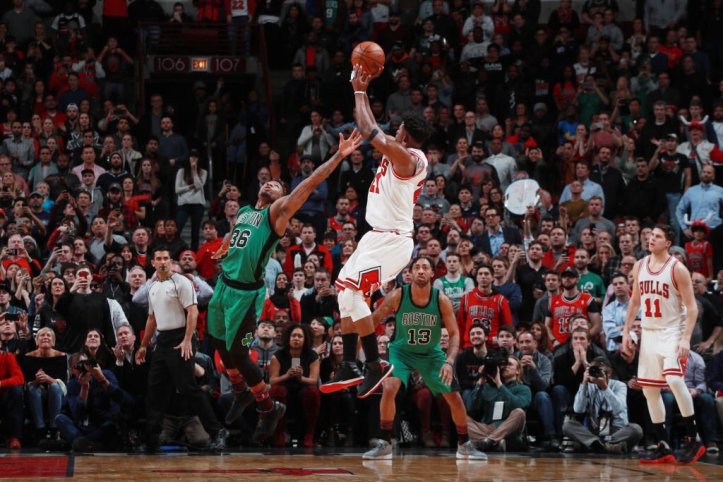 Have A Night Otto Porter Jr.

What a way for Otto Porter Jr. to cap of his spectacular first half of the season. 25 and 8, 6 threes, and great defense to hold Paul George to just 17 points on 6/19 shooting.

I gotta admit, I never saw this leap coming from Porter. He’s posting 15 and 7 with 2 threes and 1.5 steals per game, plus hitting a ridiculous 47% from deep to lead the league. He’s everything you want from a Three and D guy in this league. Athletic as hell, runs the floor, doesn’t need the ball, hits threes both in the halfcourt sets and in transition, and will take the other teams best wing every damn night.

I’m not gonna go as far as to say he should’ve been an All Star, but the case could be made. He fulfills his specific role as well as any role player in the league. Credit where credit is due.

Have A Night Jimmy Butler

Hell of a job by Jimmy to show out for the team he’ll be playing for next Thursday.

(Just kidding, Danny Ainge doesn’t have the guts to do it)

Game Of The Night

Big controversy of the night! Did Marcus Smart foul Jimmy Butler? Did he touch his elbow? Is the NBA rigged???

No, of course Marcus Smart didn’t foul him. I mean maybe, maybe he grazed his elbow. But no, a foul should not have been called.

If you’re Marcus Smart you HAVE to know they’re going to give the superstar a superstar call. You want to pride yourself on being a great defender? Okay. You have to know that if you put your hand near a shooters elbow, they’re going to call it. Superstars get that call, regardless of whether you hand grazed his elbow. If it’s close, they’re going to give the star the benefit of the doubt. If you can’t block it, which was clear from the second Butler jumped, then don’t put your hand in the one place they can call the foul.

Not a foul. Absolutely not a foul. But that doesn’t change that it’s on Marcus to maybe be a little more… Smart

The Warriors did another spectacularly corny photoshoot yesterday. Jokes were made…

“Don’t think of me as Mister Curry today…" pic.twitter.com/3WyNfh1941

"Ay my man wanna talk to you he over there" pic.twitter.com/hCcGwze2yZ

"Basketball is my antidrug." pic.twitter.com/yDmIMz2VBF

"What do you mean my son isn't in the starting lineup??" @TylerIAm pic.twitter.com/AF1CMeJPRp

I’ll be here and on twitter @yourboyham11 posting any notable stuff from the next few nights. Should be a HHR coming Sunday morning after the Slam Dunk, Three Point, and Skills Challenge for people who have lives and won’t be sitting on their couch watching these games.