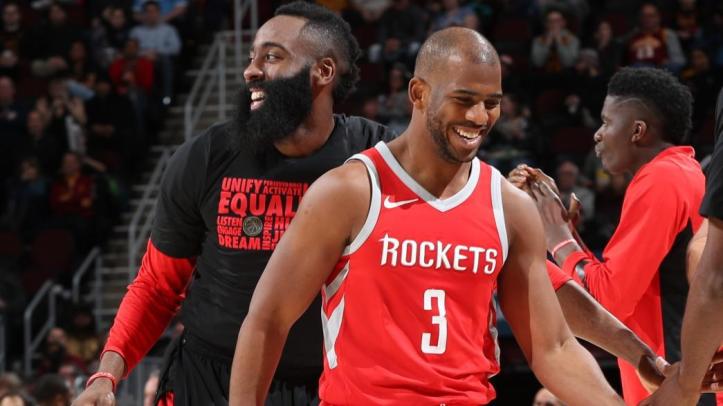 Jimmy Butler underwent successful surgery on his injured meniscus yesterday morning. He and the Wolves are hoping it’s a 5-6 week injury, and that he could be back in time for the playoffs.

I love Jimmy Butler. That dude is without a doubt my favorite non-Latvian Unicorn in the NBA. He is a fucking gamer on the court and one of the most genuine, likable dudes off it. He went from barely being recruited to junior college to Marquette to the 30th pick to a rotation player to a bonafide superstar. I’ve stanned for his MVP candidacy on here all season. In a playoff series there aren’t more than three guys I would rather go to war with than him. He’s absolutely hilarious and takes nothing in life too seriously except the game itself. Jimmy Butler is the best of what sports is.

This is awesome, Jimmy Butler visiting a fan for a Make A Wish. While on crutches off an injury pic.twitter.com/6WzWmhBeqR

It's hard to not root for Jimmy Butler after seeing videos like this from All-Star weekend.

From a basketball standpoint, I don’t really have to explain how big of a blow this is. He was the heartbeat of that team on both ends, and it’s now on Towns and Wiggins to both take a massive step forward and carry this team into April.

The next three weeks will determine what happens with Minnesota. After going to Sacramento tonight, they kick off March with a BRUTAL eight game stretch of @Portland, @Utah, Boston, Golden State, @Washington, @San Antonio, Houston, and finally the Clippers at home – a stretch that includes a highly unusual stretch of 3 games in 14 days bookended by two back-to-backs.

After that it’s smooth sailing for their last ten games.

They’re 4th in the West for now, but stand just 4.5 games ahead of 10th place Utah. If they can survive that stretch with a record of 4-4 of better, it’s hard to see them falling further than 6th place – therefore avoiding Houston and Golden State in the first round.

If they blow it and are hovering at 39 or 40 wins with 10 games left, then we might be talking about them missing he playoffs altogether.

In other LeBron destination news… Pop had an awful lot of nice things to say about LeBron before yesterday’s game. Just… just fold this up and keep it in a drawer nearby for safe keeping.

Pop says that LeBron's social activism has been "a brilliant example for millions of kids." (via @PDcavsinsider) pic.twitter.com/oXWXdyvXAQ

The Hornets came out and blew the fucking doors off Detroit yesterday afternoon, jumping out to a 70-46 halftime lead thanks to a second quarter run from their bench. The bench ended up scoring 51 led by Kaminsky (13p/8r and Zeller (13p/5r) .

The Hornets have now followed up a four game losing streak with a four game streak the other way, climbing back to just 1.5 behind Detroit and 4 behind Miami for 8th place. It’s hard to see them making up all that ground with just 22 games to play… but it’s not totally inconceivable.

And if you’re wondering the answer is yes, I would most likely not write one single thing about a Toronto-Charlotte first round series.

Take a look at highlights from today's 114-98 victory over the @DetroitPistons 💪 pic.twitter.com/Eb22gIj1Yu

…to help Anthony Davis (27p/13r/2b/2s) on what you’d consider a slow night for him during this five game win streak. Going into last night these were his averages over the previous four games.

And after last night, there are Davis’s numbers since they lost Boogie on January 26th: 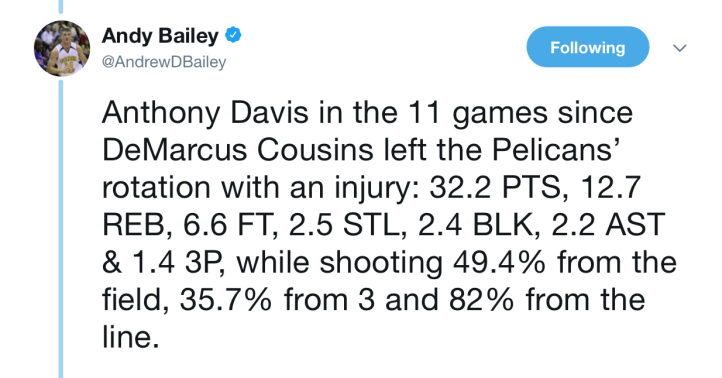 Thinking about what they could have been with Boogie still makes me incredibly sad. But that doesn’t mean this New Orleans team can’t still be a bear for anyone in the West.

Davis can very easily be the best player in any series short of Golden State. Mirotic has been a really nice fit, and Jrue has stepped up in a major way over these last five games as the second banana.

Despite the absurdity of his banked three in overtime last night, and the deceptive inconsistency of his 43.5% three point shooting percentage in February, Rajon Rondo is shooting a somewhat respectable 35.2% from deep on the season. There’s shooting and spacing and that should only improve as Mirotic and Okafor (which is still wild) get more comfortable with this group.

The rest of the Cavs? Not so much… 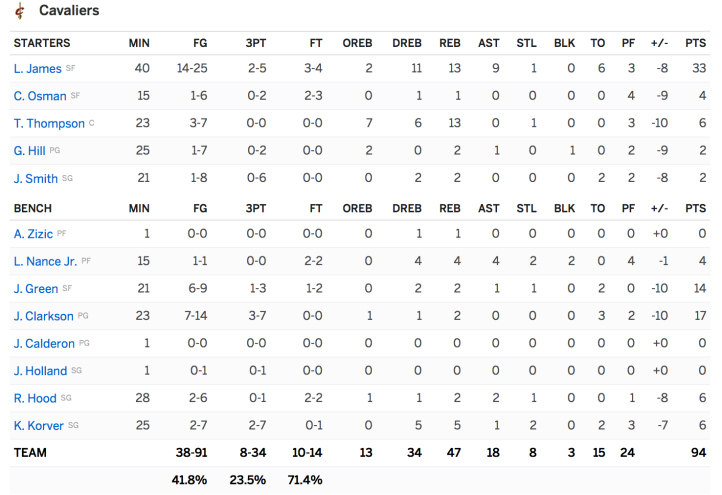 They’ve got Brooklyn tomorrow and then a very interesting showdown with Philly on TNT Thursday.

And yes, Dejounte Murray continues to be incredible.

Speaking of Philly, they had a nice little seven game win streak snapped by the team they started that steak against back on February 6th.

We’re gonna see a LOT of Washington this week as they play three in the next four nights, all on National TV.

They’ve won 12 straight and travel to Utah to put that to the test tonight before the still very anticipated but not as much so without Blake rematch with Clippers on Wednesday.