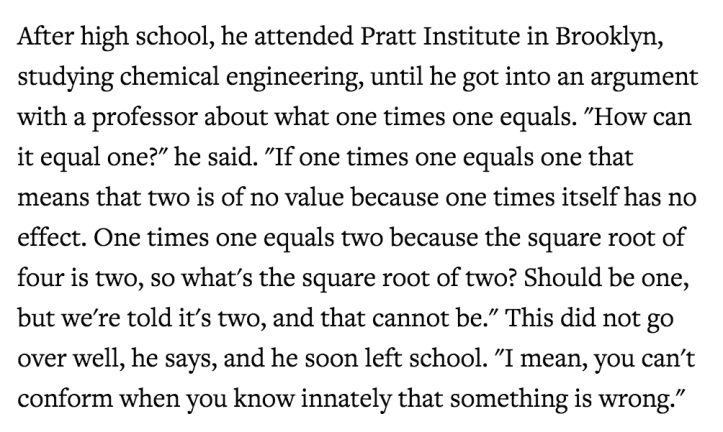 Esquire  —  After high school, he attended Pratt Institute in Brooklyn, studying chemical engineering, until he got into an argument with a professor about what one times one equals. “How can it equal one?” he said. “If one times one equals one that means that two is of no value because one times itself has no effect. One times one equals two because the square root of four is two, so what’s the square root of two? Should be one, but we’re told it’s two, and that cannot be.” This did not go over well, he says, and he soon left school. “I mean, you can’t conform when you know innately that something is wrong.”

Maybe my favorite story of the month. It’s just perfect. Terrence Howard looks exactly like the type of person who would tell you that 1 times 1 does not equal 1. He’s the kid who came into that freshman class and immediately questioned everything the teacher said. Spoke a little too dramatically for normal conversations because he wanted you to know how deep of a thinker he was. Thought a little too hard about commonly accepted ideas because he couldn’t not challenge the norm. It’s just fantastic stuff. He went into this Esquire interview with the sole purpose of showing everyone that he was more than just an actor, and walked out looking just like every other actor who thinks they have the world figured out. Keep doing you Terrence, maybe you’re just two times smarter than the rest of us and we don’t even know it. Sorry, I mean 1×1 smarter than the rest of us.