Good Morning To Everyone Except Deadspin, Who Got Owned By Ted Cruz Online

@Deadspin what do I win? pic.twitter.com/9XuRmmIkJS

If you let Ted Cruz own you online, you don’t deserve a Good Morning.

And if you respond like a punk little 13-year-old hopped up on energy drinks who couldn’t quite think up a comeback in time, you DEFINITELY don’t deserve a Good Morning. 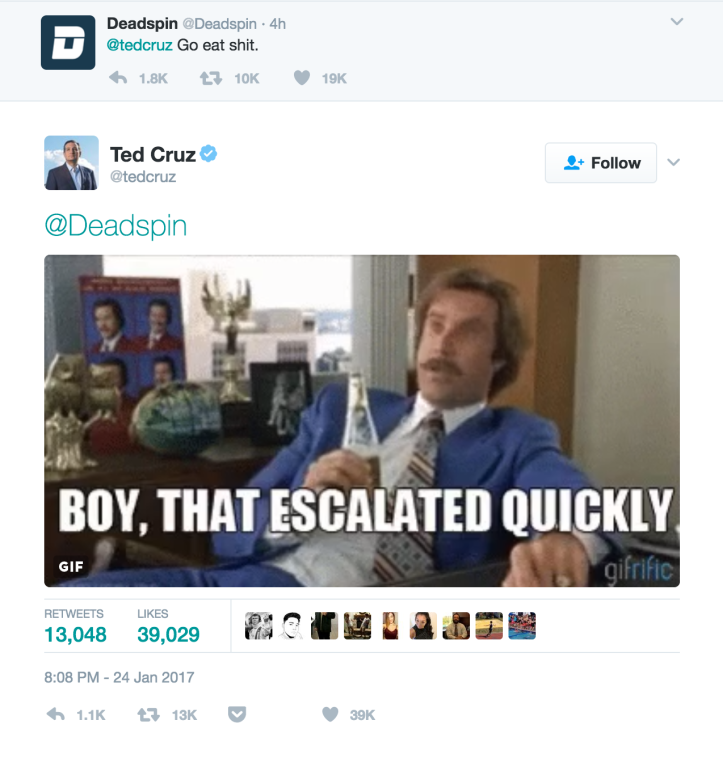 Maybe lay of the Monster and Call of Duty for a little bit, Deadspin. Go outside and go for a walk. Jerk off or something. Not everything is the most serious thing in the world. And certainly not a completely innocent, self-deprecating tweet.

Is Ted Cruz garbage? Of course. Ted Cruz stinks. But a good joke is a good joke, even if it was almost certainly done by an intern.

I went to Deadspin’s Twitter page to find their original response. I thought for sure it would be something along the lines of a “wow, maybe Ted Cruz does have a soul” or something. At the very least a retweet of the joke with emojis.

Deadspin has a stick so far up their ass that they didn’t even promote what could have been the best piece of PR for their website since Hulk Hogan literally, like, literally bankrupted their parent company last year. They’re so on their high horse that they couldn’t even run with a golden opportunity for content that other sites would KILL for.

And through this petulant response they made Ted Cruz look like a massive winner. Think about that. Think about how hard it is to make Ted Cruz seem likable.

So great job there Deadspin. Hope you have an awful morning up there on Mount Pious. You just got owned online by this guy.