I’m not writing one single thing about this game and I don’t think any of you will care.

John Wall (27/4/6/2) is back looking like his old self again after a slowish start to the season.

Porzingis overcame some early shooting woes to hit some big shots late and finish with 22/8 with 2 blocks.

Tim Hardaway Jr sinks the clutch 3, breaks out a shimmy to celebrate!

That’s his third 26+ point game in the last three.

I’m still not juiced about giving $72 over 4 to Timmy. He’s ignoring an open Kristaps a little too often. And he still takes more than enough “no, No, NO… YES!” shots. But if he’s gonna continue to run the floor and mostly move the ball and genuinely give a shit like he has, then that contract doesn’t seem like the worst thing ever.

The sights & sounds from Wednesday’s win pres. by @budweiserusa pic.twitter.com/PdvhdDM6Sh

Folks I haven’t seen someone go that hard at a rim since Dwayne Wade got home last night. That’s a sex joke. Please take my writing seriously.

Interception and SLAM by LeBron James!@cavs looking to close out on ESPN. pic.twitter.com/6TVpxFQwm4

LeBron poured in 31/6/8 and moved the Cavs back over .500 for the first time since their late-October swoon.

Michael Kidd Gilchrest went for an uncharacteristic 22/6 in the loss, including this professionally framed poster on our dear friend Earl Joseph Smith the Third.

MKG with the drive and dunk over JR Smith 😯

Catch me in public and you will absolutely see me looking like Isaiah here.

IT look like he in his own world sometimes lol pic.twitter.com/HmzNe4MNq3

Darren Collison? Sure, whatever.

.@Klow7 JUST misses a triple-double in the @Raptors 125-116 win over the @PelicansNBA. #GameTime

Ladies and gentlemen your 2017-18 Chicago Bulls! 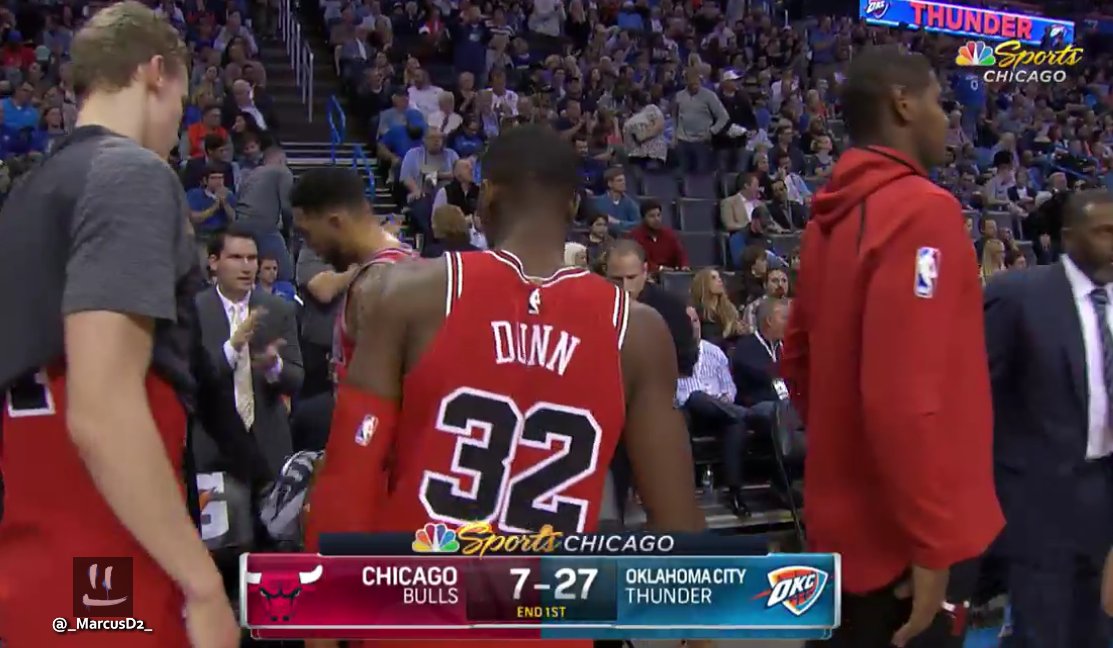 This stinker did give OKC a chance to get themselves set for a monster three game slate at San Antoni, at New Orleans, and home for Golden State over this next week.

Lopez on Westbrook. I think we all know how this ends.. See ya Robin! pic.twitter.com/ME4cKugoiU

Dame and CJ combined for 50.

Trust The Process… See The Results…

46 points. 15 rebounds. 7 assists. 7 blocks. 14 of 20 shooting. 2 of 3 from three. All without really ever going into his bag until he turned poor Julius Randle into Emily’s post-Soul Cycle treat.

It was the most effortless 46-15-7-7 I’ve ever seen. It was also the only 46-15-7-7 that any of us have ever seen but that’s besides the point. He removed the term “contested jumper” from the vernacular and euro-stepped so freely you’d have thought the lane was open.

At some point over the next few weeks, I’m gonna sit down and punch out a billion words comparing and contrasting and arbitrarily ranking the five guys–Giannis, Embiid, Porzingis, Towns, Simmons–that have already started to shape the next generation. But quickly:

1) Embiid is the only one of those five without a clear hole in his game. Giannis and Simmons it’s their shot. For Porzingis it’s his strength. For Towns it’s his defense. Embiid’s only concern is health. And while that does make him the riskiest bet of the five in terms of “who will be a top five player in five years”, I do think he’s the one with the highest possible ceiling.

2) The only thing more insane than the Sixers having two of those guys is the fact that there are conscious beings out there who still don’t believe in The Process.

*extremely the NBA is so dope right now voice*

“I’m at 69%”@JoelEmbiid after his career-high performance vs. the @Lakers. #TrustTheProcess pic.twitter.com/5MbvyK2RKd

*extremely the NBA is so dope right now voice*

THE NBA IS THE DOPEST

What we watched with Embiid last night was special. It’s almost hard to fully digest it right now. Like, there’s a real chance we just watched the moment that once-in-a-generation… shit, once-in-a-lifetime athlete fully actualize his ability. I don’t want to get carried away… but I can’t stress enough how comically effortless he made 46-15-7-7 look.

But part of me does almost wish he only went for 35 and 12 or something so that we could appreciate the game for how much young talent was on display, rather than have Embiid’s performance overshadow it all.

Ben Simmons, Brandon Ingram, and Kyle Kuzma were all AWESOME tonight too. Maybe not “holy shit we just watched the revolutionary Hakeem begin realize his capabilities” awesome. But still awesome. Ingram (26/11) and Kuzma (24/7) went for career-highs and flashed future All-Star potential. And Simmons posted a 18-9-10 near-triple double with 5 steals line that was probably the least impressive performance relative to his talent. Four guys, all 23 and under, out there making big play after big play and big play and it was just an absolute joy to watch.

This will be remembered as the Embiid game. But don’t let that totally overshadow the display of just how much young talent the league is stocked with right now.

And shoutout to Kuz for attempting what would have been an all time poster on Embiid. This kid is gonna be special.

The big name missing from all of that above is of course Lonzo. He went 1-9 for 2 point and sat the whole fourth quarter. To say his shot is broken right now is the understatement of all understatements. It’s the most broken thing ever. I don’t know how or when or if it will get better.

But it’s also game 15. There are more than enough things to talk about with this sport right now than a high profile rookie struggling early with his jumper. I’m not getting caught in the Lonzo panic right now or any time in the foreseeable future.

He's now 1-for-7, including these two beauties. pic.twitter.com/UQeOvpy5vh

Even though getting dusted by TJ McConnell is not a particularly encouraging piece of film to have there.

Waking up after blacking out to find a shockingly high number in your checking account.

Hey, just a little something to keep in the back of your mind folks,,

Kristaps Porzingis vs Joel Embiid at MSG on Christmas? pic.twitter.com/v0WtSus7cN