For the Thunder, the Westbrook commitment is a significant statement in the wake of star Kevin Durant’s departure for the Golden State Warriors. Westbrook is no longer a free agent in the summer of 2017, and Thunder GM Sam Presti and coach Billy Donovan have a longer window to continue improving the Thunder roster around Westbrook without the fear of losing him in free agency. 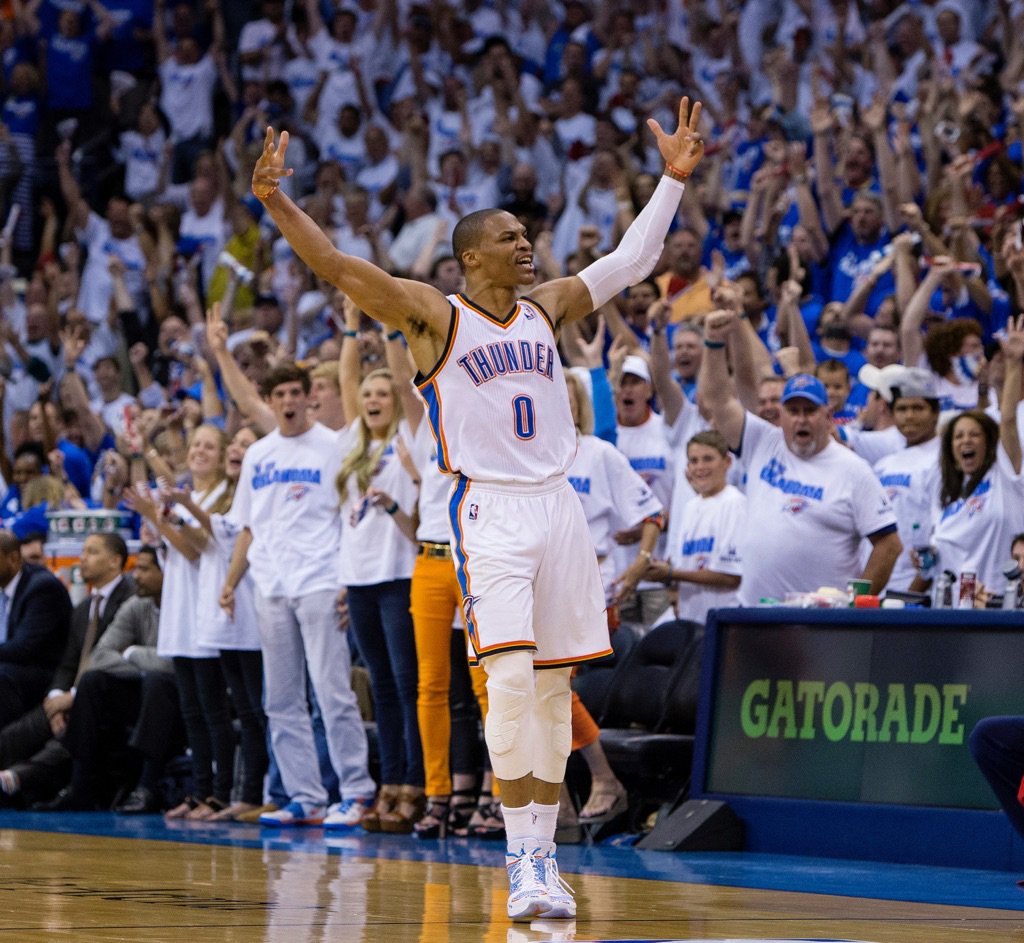 I have to admit… I didn’t see this coming.

Sure, the three year extension (with a two year opt out) makes the most financial sense for Russ. In two years he’ll have logged 10 years of service, thus making him eligible for the most lucrative contract possible if he resigns with whatever team owns his Bird Rights (basically whichever team he played for the previous season). We’re talking 5 years, $203.8 million dollars. Maybe he’s still with OKC, maybe he gets traded. We don’t know that yet, and it’ll be a few months before we have any idea. What matters now is that signing this extension was the smartest financial decision for Russ.

The thing is… I just don’t see financials playing that much of a factor in Russ’s decision.

Eight figure contract aside, we’re taking about a guy with multiple high profile advertising deals, most notably as the face of Jordan (you know, other than Michael). We know his penchant for fashion, and we know how much money he can make on that alone.

And while Russ has now had three knee surgeries, we’re talking about a fucking titanium mutant who has somehow come back more explosive each time. Even if he blew his knee out before this extension, he was still getting the max.

Russ isn’t exactly going to struggle if he’s not making the maximum possible salary for an NBA player. Even if this was the smartest financial decision, I always figured he’d want to test the waters of free agency. I mean, why wouldn’t he? New York, LA, Boston – all these major markets could offer him as good a chance to win as this OKC team, right? He could live in a big city, build a fashion empire, all while building his own “superteam” to challenge the Warriors, right? There are plenty of opportunities in NY and LA and even Boston to make the contract money he’d have left on the table. Why stay in Oklahoma City?

The answer is spite.

Spite made Russ sign that extension. That’s what we all missed, myself included.

He cares about revenge. And he’s going to carry out that revenge in the most spiteful way possible, regardless of whether or not is the smartest decision.

Russ stayed in OKC because he honestly believes he can beat the Warriors by himself — stupid as that may be — and his spiteful ass only wants to do so with this Thunder team… this team that had always belonged to Durant… this team that’s now his and his alone. That’s why he’s staying.

Now it just so happens that this extension works very well in his favor. Monetary gains aside, this allows him to avoid an entire season of speculation regarding his future with the Thunder. Sure he’ll face those questions once this extension is up, but by then the dust will have settled with KD. Imagine a full season of free agency questions and trade rumors on the heels of Durant’s departure? Russ would kill a beat writer by mid-season. This extension, more than anything else, gives him the freedom to play out this season… to set fire to the league… to play with all that spite… all without the distractions of free agency looming over his head.

Yes, Russell Westbrook made the smartest financial decision he could have, but that’s not why he stayed. He’s out for revenge. He’s about to be spiteful as all fuck. And I, for one, can not fucking wait.