Good Morning To Everyone Except Rajon Rondo

My vets would never go to the media. They would come to the team. My vets didn't pick and choose when they wanted to bring it. They brought it every time they stepped in the gym whether it was practice or a game. They didn't take days off. My vets didn't care about their numbers. My vets played for the team. When we lost, they wouldn't blame us. They took responsibility and got in the gym. They showed the young guys what it meant to work. Even in Boston when we had the best record in the league, if we lost a game, you could hear a pin drop on the bus. They showed us the seriousness of the game. My vets didn't have an influence on the coaching staff. They couldn't change the plan because it didn't work for them. I played under one of the greatest coaches, and he held everyone accountable. It takes 1-15 to win. When you isolate everyone, you can't win consistently. I may be a lot of things, but I'm not a bad teammate. My goal is to pass what I learned along. The young guys work. They show up. They don't deserve blame. If anything is questionable, it's the leadership. 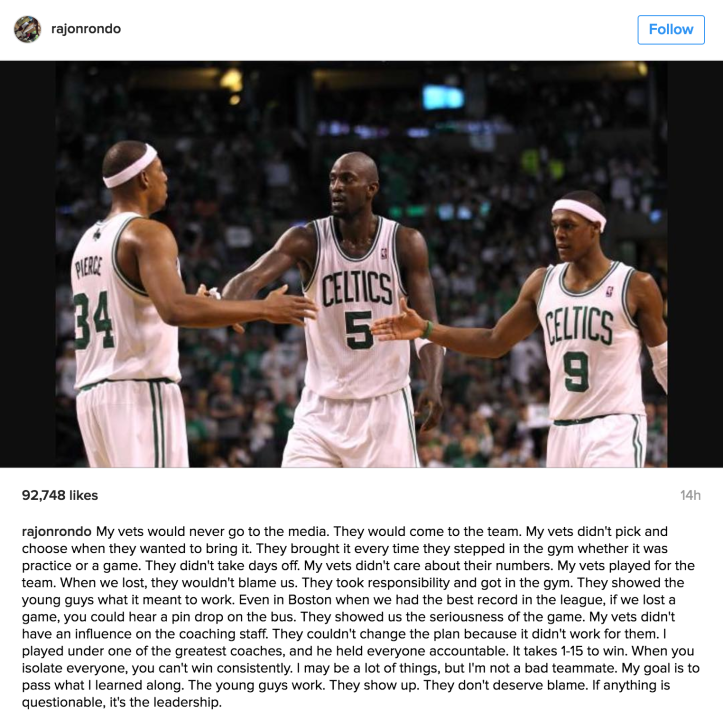 “My vets would never go to the media” -a vet, in the media

Look we can talk forever about the comedic level of hypocrisy to everything that Rajon is talking about here. I mean literally everything. About how Rajon is literally going to the media. Or how Rajon notoriously picks and chooses when to bring it, especially when it comes to defensive. About how Rajon absolutely cares about his assist numbers – so much so that he’s been called out for passing up open layups to try to get an assist. Or how he played under a very good coach in Boston who basically gave him free reign, and then went to play under another very good coach in Dallas who didn’t give him that same free reign. And so he fought him and tore apart that locker room BECAUSE THE PLAN DIDN’T WORK FOR HIM. We can talk about how he openly fought with an assistant coach this season and got benched. Or how he went to the media when his head coach benched him. We could talk about how he isolates everyone, and would absolutely isolate people on the court if he singular trait wasn’t passing. Or how this is the third locker room he’ll have submarined in three seasons.

But you know what my favorite part of this post is? It’s the first two words:

Yo Rajon, YOU are a vet now. You’re 30, dude. You’re the third oldest player on this team and the second longest tenured. This is your TENTH season in the NBA. After Wade, you’re the only other person with a title and a mountain of playoff experience. You have to start doing shit

So act like a goddamn vet. Because right now you are literally doing everything the complete opposite of how it should be done.