Ham’s Hoops Roundup Wednesday 1/17: The NBA Has Become The WWE And I Am All The Way Here For It

DeAndre wants out of LA after #SecretTunnelGate. Cleveland is in shambles. I am no longer jealous of Arron Afflalo. The NBA has become the WWE. Oh and also Anthony Davis is absolutely absurd at the hooping. It’s the Hoops Roundup for Wednesday, January 17th. Let’s get it…

When I started the Hoops Roundup last year, I used to start with the Around The Association section. Trade rumors, twitter happenings, non-basketball but basketball-adjacent things, etc. All of the things that happen on a nightly basis that are just as entertaining/newsworthy as the games.

When I picked it back up this season I pushed it to the bottom. I wanted to focus more on the games. And the product itself has been so good that outside of the weekly LaVar story, the performances have just mattered more and been more interesting.

Then MLK Day happened. Monday, January 15th 2018 happened and suddenly all the soap opera, WWE drama we’ve come to expect from June and July got squeezed into one day in the middle of January. In the span of 24 hours from Monday night to Tuesday night, here is a list of things that have happened:

Sources: As the four Rockets marched through the back hallway into the Clippers locker room, center Clint Capela knocked on the front door of Clippers entrance. Someone opened door, saw him standing there — and shut it on him.

Chuck and Shaq couldn't believe it when they heard about last night's reported locker room altercation following the Rockets and Clippers game 😂😂😂. pic.twitter.com/Tv59QxyHCX

Warriors had to shower with cold water after win in Cleveland causing KD to yell “Somebody call Bron,” per @ChrisBHaynes 😭 https://t.co/XKGA6q3Qk3 pic.twitter.com/k82MGjUKW4

ESPN — Following the Cleveland Cavaliers’ 118-108 loss to the Golden State Warriors on Monday, multiple players acknowledged growing discontent and a strong sense of concern that unlike past seasons, the team does not have the capability to fix its problems and get back on a championship track.

DeAndre Jordan wants to be traded to the Houston Rockets. (Via Stephen A. Smith – ESPN)

The NBA's investigation into the Clippers-Rockets tomfoolery began late Monday night and continues into today, league sources tell ESPN. There will be no shortage of punished individuals.

I'd like to thank the Celtics for their gracious offer to play a video tribute on Feb 11th celebrating my 3yrs in Boston. But since it appears this has caused some controversy w/ Paul Pierce's night I'd ask the Celtics instead to focus all of their attention on #34's career.

“Danny and I talked about it for 40 minutes,” Pierce explained to ESPN early Tuesday afternoon. “He told me, ‘This is what we have planned,’ and at the end of the conversation, he said, ‘If you don’t want us to do Isaiah, we won’t.’ So I told him, ‘I really don’t.’ So that was it.”

Rajon Rondo was irked to hear that the Celtics would honor Isaiah Thomas on any night. "What has he done?” Rondo asked. Told that he led the Celtics to the conference finals last year, Rondo remarked, “Oh, that’s what we celebrate around here?”

More Rondo on IT: “This is the Boston Celtics. This isn’t the Phoenix Suns, no disrespect to any other organization, but you don’t hang conference titles. Do we hang going to the conference finals? What do we hang here?”
Title banners, Rondo was told.
“OK, cool,” Rondo said.

You know who I’m extremely not jealous of? Arron Afflalo. Doing the straight-armed swing punch is already an awful look. You look wildly uncoordinated. You look like you have no idea how to fight. And even if you land it there is absolutely nothing behind that swing compared to a normal punch.

Doing the straight-armed punch and whiffing is simply demoralizing. Not only is it embarrassing – you’ve also just thrown off all your balance, lost your footing, and basically opened yourself up to get cracked.

Whiffing on a straight-armed punch and then getting tossed into a “calm down there little man” headlock by white euro is probably the single most embarrassing moment on a basketball court since Kobe Bean caught the two piece hold the biscuit from Chris Childs.

All angles of Arron Afflalo swinging out of his shoes only to be promptly placed in a headlock by a much larger human pic.twitter.com/24wHtsyJ8z

Bjelica could have paraded Afflalo’s body around the court like Achilles did Hector. That man was more helpless than a child getting pulled out the room by the ear by his furious mother. DJ Augustine was trying to push Afflalo’s head out and it just got tighter like a Chinese Finger Trap.

It was one of the funniest visuals these eyes have ever seen. And Arron Afflalo better pray to god that Nemanja Bjelica doesn’t spend the next forty years of his life signing pictures of that moment like Nolan Ryan. Because outside of those twelve bars from Kendrick, this is probably the most memorable moment of his stale bread career. 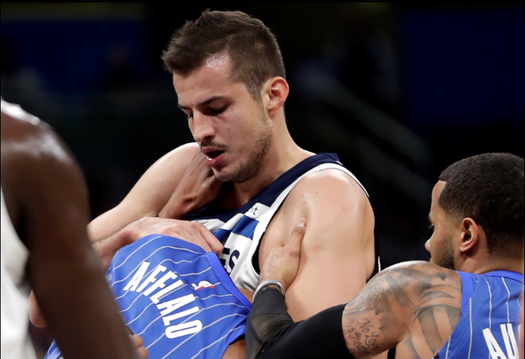 On the bright side – that fight actually spurred Orlando to their second win in their last 18 games. So that’s cool, I guess. Evan Fournier led the way with 32 points and six threes on 12-22 shooting.

And Orlando snapped a red hot Minnesota team that had won five straight and 12 of their last 15. Jimmy (28p/7r/4a/2b/5s) did his best to keep them in it and Taj Gibson (18p/7r/3s) posted a solid night. But hopefully this was a good “we’ve still got things to work on” loss to take and carry momentum into a MONSTER game at Houston on Thursday (9:30pm TNT).

I love all the drama of the last two days. LOVE it. all 1300 words or something above probably indicates that. And all of the hilarity and intrigue of NBA drama is reason 1B why I love this game.

Reason 1A is still games like last night. Games where dudes come in and absolutely annihilate a team from start to finish – especially those where it feels like they’re taking a leap. Lebron’s 45p/15r/5a Game 6 in Boston being the prime example.

Back-to-back games… on the two biggest stages in basketball… of 45+ and 15+… against a star in Porzingis and an A+ defender in Horford… I mean… holy shit.

AD has been a superstar. He’s been a top ten talent. He’s posted unreal numbers and memorable performances. But this is the first time I can remember thinking… oh shit, this is it. This is I’m a top five player… I’m an MVP candidate… Watch me carry this team to the Conference Finals.

Yes the Pelicans are weird and flawed. But they’ve always got the two best bigs. They’re always a matchup nightmare. They’ll have two of the three best players on the floor against everyone but Golden State. They have three guys I’d absolutely go to war with (AD, Boogie, Rondo) and three I’m gaining more and more trust in (Jrue, Moore, Clark). And while it’s a stretch to think they can make any moves by the deadline, adding a wing shooter/defender would vault them up a level.

Short of a major injury or a catastrophic collapse, this team is going to make the playoffs. If these last two games mean what I think they do… they’re gonna be there in May, too.

Jayson Tatum took only 6 shots, hitting half of them for 10p/5r/2a. But god damn was this move pretty.

Jayson Tatum has the ball on a string. #NBARooks pic.twitter.com/sZipEAPNxX

The other half of the Young Jay’s added 16p/4r/5a and one borderline suicidal flex on Boogie. I won’t ever feel bad for Boston – but it will be wild to see a team lose a player to a detached ankle and a detached face in the same season.

Jaylen Brown flexes after hitting the and-1 layup…

DeMarcus Cousins didn't like it but Danny Ainge did 😂

Dennis Smith (25p/5a) did his best to lead a Dallas comeback, helping outscore Denver 33-19 in the fourth.

I wrote about him last week… but Booker has been absolutely unreal these last three weeks since missing time in December. In his ten games back he’s been averaging 27/4/6 a night. Get him another young star and this dude is gonna be a PROBLEM for the next decade.