Steven Adams is the most important guy on OKC. Kyrie outdoes the Denver backcourt. John Wall is BACK. And not even Giannis is big enough for New Orleans. It’s the Hoops Roundup for Thursday, Dec. 14th. Let’s get it…

Dirty water splashed up to your lab coat as you stride down the corridor. This corridor is on the fifteenth floor, but it’s still damp. All corridors are damp. You don’t know why, but that’s a concern for another time. You near the door, needle in hand. The last few have not survived the pain, but your dosage remains the same. This one is smart. This one is resilient. He’s been stuck in the face by La Cabra himself. He’s survived battles you yourself could dream of. Through decades he’s remained. This won’t be easy. As you open the door, he looks up. He attempts to speak, but the muzzle drowns his voice. You administer the syrum and step back. It brings you no joy to see the pain. But you must know. You must get the answer. And it must be him to tell you. “WHO?” you scream, ripping off the muzzle, “WHO IS THE MOST IRREPLACEA–“

“Dude it’s Draymond. It’s clearly Draymond. It’s pretty obvious that losing Draymond and what he does would most drastically change the way we play. I would have told you that without any of the dramatics. Can I please go home now?”

Steven Adams is the Draymond of the Thunder. Different height, different demeanor, different skill set. Totally different player – but it’s the same idea. He’s the anchor of the defense and the lynchpin of the offense. OKC has been slower on the take than Golden State was on the latter. But over the last seven games we’ve seen that come to fruition.

The Thunder offense is at it’s best when utilizing Adams. His size and physical dominance in the PNR and on the glass is to the Thunder what Draymond’s quickness and passing in the PNR are to the Warriors. Draymond’s skills are more useful. Draymond is unquestionably the better player. But Adams skills as the screener are invaluable nonetheless.

The old backcourt teammates had themselves a nice, fun, wildly inefficient duel in this one. Russ went for 10p/17r/12a triple double, but hit just 3-17 shots. Oladipo went for 19p/5r/6a on 9-26 shooting following his 47 point night vs. Denver on Sunday.

Paul George got booed a LOT in his return to Indiana and was pretty quiet (12p/5a/3s on 3-14 shooting), but he did get to quiet the crowd literally with two free throws to seal it at the end. 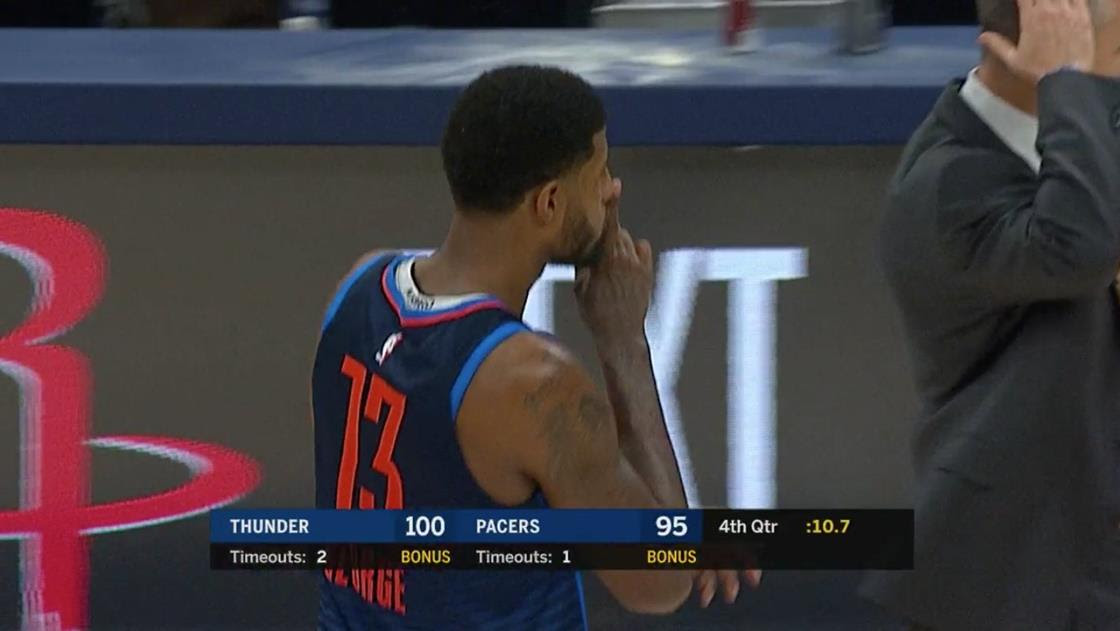 This Clippers team stinks. Three of their five best players are out. Doc is trying to get fired. Their title window got slammed so hard that now there’s shards of glass all over the floor.

They clearly want out. They should be on fun competitive teams having a good time and smiling and dating two girls at once.

But here the are, still bringing it. Still driving up their trade value and making it more difficult for LA to just give up, trade them, and go full in the tank. And in a league where Eric Bledsoe was rewarded for not wanting to be… at the hair salon… with getting run with Giannis, I hope these two are equally rewarded for doing the opposite.

Wall went for 13p/4a in 26 minutes. He’s got one more game to tune up vs. the Clippers on Friday before a monster Sunday Showdown with Cleveland.

But yeah… I think he’s already good to go.

John Wall's biggest moments in his return to the lineup for the @WashWizards!#DCFamily pic.twitter.com/PK4KGDyHQX

Jokic should be back by Friday for Denver. Unfortunately for him, he’ll be greeted with one of the most grueling Big Man stretches I’ve ever seen to finish December. LOOK AT THIS STRETCH. Boogie and AD, Adams, Towns, Nurkic, Draymond, Gobert, Towns again, and finishing off with Embiid. HOLY SHIT.

But if they can survive the month, look for Denver to go on a major run with their cake walk of a January schedule.  These guards are really coming into their own. Add that to a fully healthy Jokic and this is a dangerous team.

But Denver did lose. Thanks it large part to Kyrie (33p/7a) doing some patently ridiculous Kyrie things.

Toine was on hand last night looking like an offensive tackle.

Toine why were you 300 pounds during your playing days?

Goddammit I wish Dad Stevens was my coach.

Donovan Mitchell with the HAMMER

Donovan Mitchell also played two full seasons at Louisville and is 21. I just want to put that out there for people. He is 21 and played college basketball at the highest level for two seasons. A certain foreign born prospect whomst resides in a certain large metropolis is currently the youngest player in the NBA and two full years younger than Donovan Mitchell. And if said player is not as good in two years as Donovan Mitchell is today, a certain blogger will print this blog out, roll up some pine needles from his 2019 Christmas tree, and smoke it on Facebook Live like a blunt while reciting La Marseillaise and waving a white flag of surrender.

Giannis has now posted 19 performances of 50+ FPTS and it's not too late to draft him! Join a league right here: https://t.co/gQ84DuABNW pic.twitter.com/ygVcozWW6Z

Eric Bledsoe lobs it up over his head to Giannis Antetokounmpo for the dunk 😯#FearTheDeer pic.twitter.com/d0au5nZT6i

Boogie and AD were just greater.

37p/7r/4a from DeMar DeRonzan, who continues to play the best basketball of his career, upping his FG% to 47.8% and his assists to a career high 5.2 per game. Toronto has won 7 of it’s last 8 and just continues to lurk at third in the East.

This was before last night…

ITS A SPICY ONE

Euro stepping our way through Minnesota and we ended up raising the cat last night #TheProcess pic.twitter.com/3E90Ux47GG

ITS A VERY SPICY ONE

The Seed Is Strong