Boston rolls to it’s tenth straight win. Steph and Klay dominate Minnesota. And what Porzingis sitting out tonight shows about the future of the Knicks. It’s the Ham’s Hoops Roundup for Thursday, November 9th. Let’s get it…

No Porzingis for New York tonight, who was out with [insert fake injury], so it’s tough to take much from this game.

The actual highlight but really lowlight of the game came from this ref, who threw quite possibly the worst jump ball I’ve ever seen. Straight up and down my guy. You literally say that before you throw it.

This has to be the worst jump ball thrown by a ref in NBA history. Even Kanter who won it was like WTF? 😂 pic.twitter.com/0wkwgg4EUv

Instead, the real takeaway is the uncommon brilliance and long term vision of the Knicks by sitting KP. Not only was it the correct move to sit KP on the second half of a doubleheader after the workload he’s shouldered these first ten games. It also not-so-unintentionally allowed them to tank a game and “gain one” on another presumed lottery team. And it was all done against a low-engagement team, on a night where the league’s eyes were transfixed on Boston-LA, early enough in the season to avoid the attention of the League Office’s new anti-resting crusade.

This is what smart organization do.

What’s clear already is that KP is just too damn good for this Knicks team to be an absolute bottom feeder. Despite the lack of talent around him, he’s going to take over games and carry them to at least 30 wins by himself. Between that and the new tanking rules, they can’t go full Process.

They have to find a middle ground where they’re not *blatantly* tanking (which would discourage KP, stunt his growth, and hurt their already damaged but slowly improving reputation with guys around the league), but also not needlessly overextending Porzingis to chase a playoff spot (which would tempt them to trade for help instead of selling vets for draft assets at the deadline, and would risk their last real chance a top five pick as KP keeps improving).

Despite their record, they’re actually on the right path towards that. They’ve played 7 of 11 at home–including 5 of their 6 wins–with those six wins coming against bad and/or slumping teams. They’re not a .500 team, and they’ll begin to regress as their schedule get tougher the rest of November.

They’re keeping the team energized and internally competitive by rewarding high-effort vets like O’Quinn and Lance with minutes. They’re not overextending Frank. And so long as they pick and choose smart spots to rest Porzingis (like the front end of a back-to-back at Atlanta in two weeks or the back end of a b2b in Indy the next week), they’ll be on the right path.

And maybe… just maybe… Scott Perry and Jeff Hornacek might be turning the Knicks into a smart, long-term organization. Maybe.

Eyes on the prize

Eyes on the prize pic.twitter.com/WoKlMLvogS

Anyway, Elfrid Payton returned tonight to the tune of 11 points on 5/9 shooting and 11 assists, including this oop to Aaron Gordon

We missed this. ☺️ pic.twitter.com/fcisichpFd

Gordon, Fournier, and Vucevic all had themselves a night in KP’s absence – combing for 68 points on 26/43 shooting to lift Orlando to an impressive 7-4 after two straight losses.

And while the numbers aren’t there yet, Jonathan Isaac is another one in a preposterously deep crop of impressive crop of rookies. So deep that the number 1, 2, and 4 picks don’t even crack the top ten of that list right now (in some order: Tatum, Mitchell, Markkanen, Smith, Ntilikina, Fox, Monk, Isaac, Kuzma, Collins) without even counting Ben Simmons (who is not a goddamn rookie). Insane.

Tobias Harris went for 23-8 with 5 threes. Andre Drummond ripped down 21 boards to go with 14 points, despite seeing his free throw shooting come cratering back down to earth with an 0-7 night from the stripe. And Reggie Jackson added 18-3-6 to carry the Pistons to an increasingly shocking 8-3 record with a very real shot at taking these next four before a stretch @MIN, CLE, @OKC, @BOS stretch starting next Sunday.

.@AndreDrummond with 14 points and 2️⃣1️⃣ rebounds in the @DetroitPistons' 114-97 win over the Pacers. pic.twitter.com/REk2k5zVwV

I need to settle myself in for a full game to really get a feel (looking at them going to Milwaukee next Wednesday), but god damn has this been an impressive start for the OG Stan Van and the Pistons 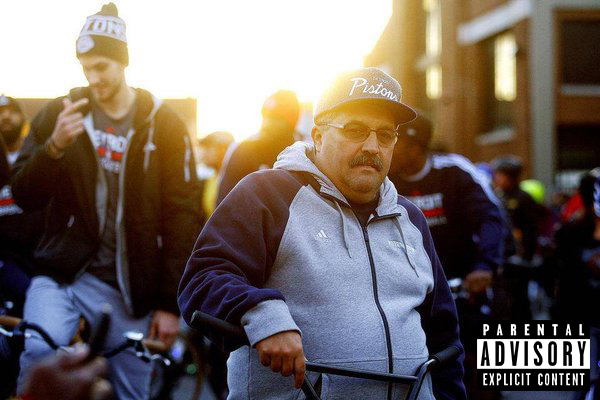 That makes it ten straight for Boston… ten straight with a tough but doable chance (vs. Charlotte, vs. Toronto, @ Brooklyn) at 13 straight heading into a matchup with Golden State in Boston next Thursday that is giving me the goddamn FEELS.

Danny This got in on the action with a two-handed hammer.

And Marcus made a Smart pass to Semi for one crazy Ojeleye up. Sorry sorry trying to delete.

Lonzo filled it up with 5 rebs, 6 asts, and 4 blocks. But his shooting woes continued to the tune of 4/15 for just 9 points.

Folks I haven’t see a Ball get stuffed harder than this since LiAngelo met his cell mate. I’ll just see myself out.

🗣 STAY IN YO LANE pic.twitter.com/iA2li2dM1B

Just a tough few days to be a Big Baller.

This maybe the best sign ever made at the Celtics Lakers game tonight. #LavarBall #BigBallerBrand pic.twitter.com/vj9Kpt8Euw

The story of the game, though, was the big bruiser Baynesy coming in for the injured Al Horford for 21-8-3 in just 25 minutes.

All before returning to his post outside Sissy K’s before the Garden Crowd made it’s way over.

Aron Baynes looks like Gordon Hayward got bombarded with gamma rays and then someone made him angry pic.twitter.com/LfsZlCD5cy

Seven of eight Miami guys scored in double figures, led by 29-9-4 from Dragic and 23-10 from Whiteside.

Who also came about thiiiis close to putting Mike James’s dunk attempts through the backboard glass.

Justise Winslow went for a season high 14-6-5. I’m still very, very, very much a man of Justise and if I’m a young, rebuilding team I’m calling Miami every day offering to take on a bad contract to get him.

En route to their 5th straight W, the Splash Bros put on a performance.

And the W’s took their fifth straight win with ease, even despite no Kevin Durant.

Also going in on the fun was Omri Cassppi, who went for 13 points with 3 blocks and 2 steals in what was probably a lot of peoples first reminder that he is on the Warriors this season.

.@Casspi18 getting it done on both ends pic.twitter.com/MHmwGFQkWi

The Wolves got double digits from all five of their starters, but nobody topped 20 on what ended up being a bad shooting night (41.3%), especially behind the arc (20.8%).

Wiggins did have this beauty though. So there’s that.

Steve Kerr, who I think just realized a week ago how much fun it is to berate the refs. Started going at Kenny Mauer after an uncalled travel and turned it into a little dance routine.

Also the real star of the show there was my man going HAMMERTIME on those noodles behind the bench.

Some might say take it easy. I say life is short, live it up and smash fist-sized bites of noodle while you still can.

shouts to my man going hard at his Chinese takeout noodles pic.twitter.com/HXVp0QCLl3

We also got some prime blowout game Van Gundy last night, who must have some list of grievances on at all times to air out in the case of a late game blowout. Last night he took on College Basketball and the idea of “student athletes”

As soon as I get the video I’ll post it. But for now this gif was truly magical.

We know the face of every star in the NBA. It’s one of a number of factors supporting the overall health of the league right now. If I gave the average NBA fan this picture from the Washington Post of the cartoon-ized faces of the league’s top 40 players and told them to match a name to the face they’d roll through it with maybe 5 or 6 exceptions. Again… that’s the cartoon-ized faces. And that’s on a list without big names like Wade, Dirk, & Dwight or young stars like Embiid, Simmons, Booker, & Lonzo, among others. That ain’t the case in any other league.

The league is littered with recognizable, marketable faces. And even despite the conglomeration of talent in some places, you can pretty much find one of those guys on every team. Sure, Detroit (Drummond), Miami (Whiteside/Dragic), Indiana (Oladipo/Turner), Orlando (Gordon), and especially Atlanta (Schroder) might not jump off the page. But you know them. You know those names and you know those faces.

29 of the 30 teams have a guy for the opponent to put on their program to sell the matchup. Only one does not.

The Bucks found another way to sell that game.

In five-game ticket package, the @bucks have pictures of each marketable star. The Bulls? pic.twitter.com/wIIEdWIUgO

And that’s it. Five on the slate again tonight, including a fun and hopefully very competitive TNT doubleheader. See you right back here tomorrow