Boogie serves up his Kings Revenge, Blake buries the Blazers and reemerges as an MVP, and the Celtics spoil Milwaukee’s return to Mecca. It’s the Ham’s Hoops Roundup for Friday, Oct. 27th. Let’s get it…

There was a basketball game played in Milwaukee tonight. Many things happened during that game. Exhibitions of talent, displays of skill. It was a good game. A fun game. A thoroughly entertaining game.

At least that’s what I’m guess. Because I remember nothing. I can’t recall one single moment. All I saw was the floor of Mecca in all it’s glory. And the game  itself was merely dust in the wind. I don’t even know what that analogy means. I’m still thinking about the floor.

Seriously though the court was magnificent. It felt like they were playing in an alternate reality for a while – like it was a video game simulation or something. And it genuinely did take a while to adjust to it.

Once that adjustment came, it was a very fun game. One highlighted by a newfound chemistry between Kyrie Irving and Al Horford.

The handles. The pass. The 👌. pic.twitter.com/7zyIxYCrbB

The two looked great together and dominated this game from start to finish. Kyrie dominated the first half with 16 of his 27 points. And Al came out strong late to score 16 of his own in the second half, finishing with 27/9/4 on 11-14 shooting with 4 threes.

It was both guys best game of the season, and even featured a little defense from Kyrie.

By the way^^^… who said, @NBATV? Many people have said. And they’ve said it many, many times.

They’ve also said Kyrie has the juice. And that was on full, FULL display tonight.

We saw the ridiculous glass game…

Doesn't look like @KyrieIrving is worried about the court anymore… pic.twitter.com/vI8sBXWevE

And the feathery ass touch we’ve come to expect.

This was Kyrie’s coming out party as a Celtic. And even without Gordon Hayward this team is a PROBLEM on any given night.

Giannis also tried to homicide Aaron Baynes at the end of the first.

If Giannis would have dunked this…

I don’t have the words pic.twitter.com/JNbvzkYW56

I wanted to come on here and play contrarian and say everyone should calm down, he wasn’t that close.

But shit… if that’s anyone other than Aron Baynes I think we’re talking about one of the greatest dunks of all time. If Aron Baynes–a 6’10” 280 pound brick shithouse who might be the strongest man in the league–isn’t there to stop his momentum, Giannis goes straight through him and is arrested on the floor of Mecca for murder. The fucking courage to even attempt to block that is downright heroic by Baynes.

And while I think we’ve used every superlative in the book to describe Giannis already, think about just how strong he is that he knocked Aron freakin Baynes backwards like a tackling dummy. One of the all time missed dunks. I love the NBA.

Look how far from the rim they meet I mean WTF pic.twitter.com/BUksDSFfns

When you feel a poop coming on at the bar.

Also shoutout to the dude who showed up in the full Milhouse fit. Great bit.

Guys, I don’t think the Bulls will stick with Jerian Grant long term at the 1.

Hey at least he learned though, right?

Markkanen went for 14/13 and continues to look like one of the more impressive rookies. Maybe GarPax knew what they were doing all along?*

brb watching this on repeat 😍 pic.twitter.com/IhMRCEUkf2

I also love when freakishly athletic guys get the most vanilla names like John Collins. John Collins is an accountant in Ohio who wrote-in John Kasich last November and eats the same turkey sandwich for lunch every day – not a 6’10” super athlete who looks like Trey Songz got stretched out. 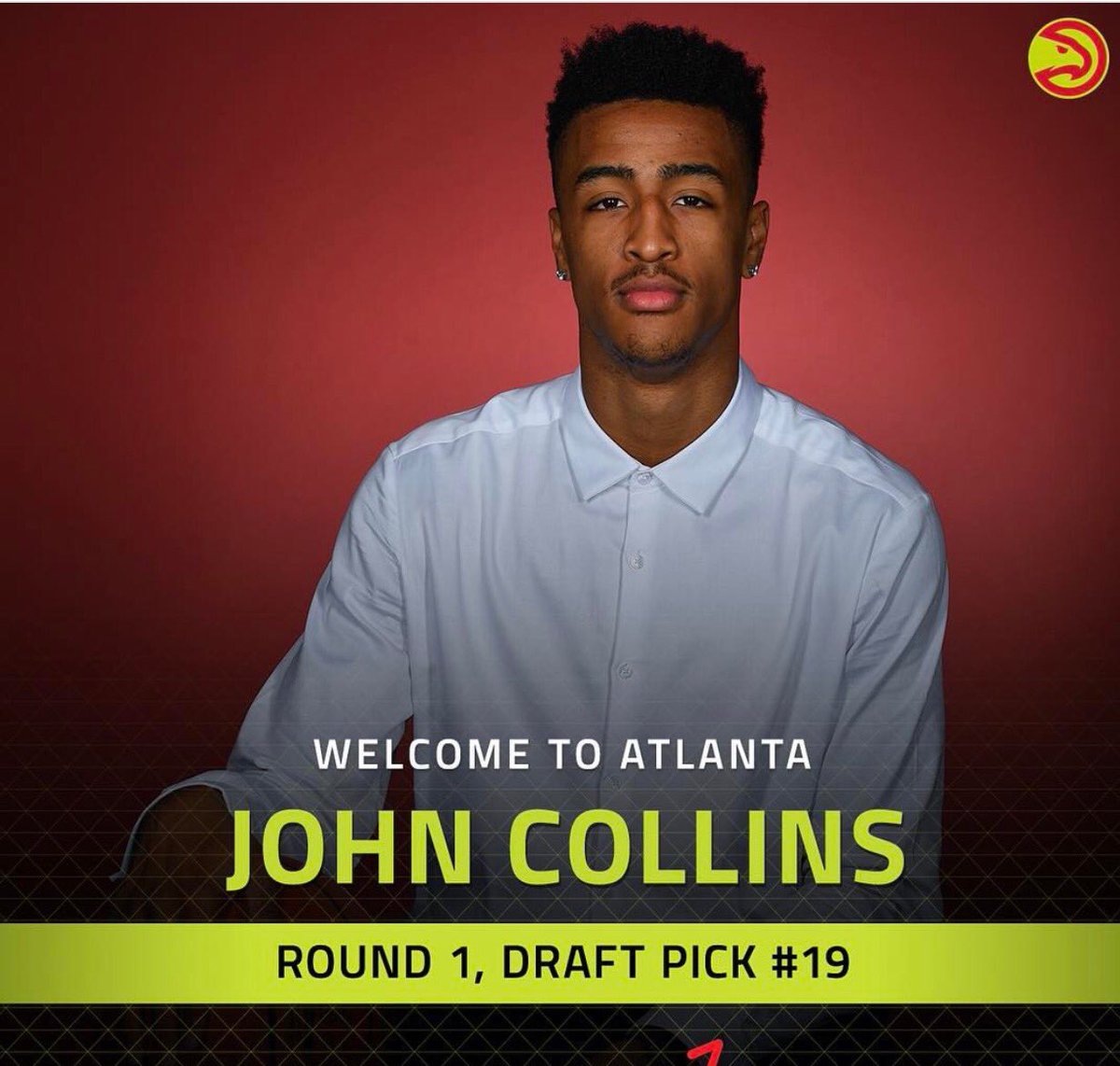 Big John Collins’ block would’ve been a lot cooler if it didn’t lead to the worst stretch of basketball this season.

Also speaking of musicians Chance The Rapper had a nifty layup late. WHERE’S THE NEXT PROJECT CHANO WE’RE WAITING?

For your viewing pleasure 😍 pic.twitter.com/y4gq9JoOsO

This is gonna be the grittiest ‘n grindiest baby. God bless.

Going into labor but still can’t stop us from watching our @memgrizz!#GNG #AllHeart pic.twitter.com/TeffjLzwJp

If that baby isn’t named Marc I’ll print this blog out, cook it low and slow, and eat it whole with a side of spicy slaw and cliched journalist tropes.

That joke was awful. Marc Gasol is very much the opposite.

Marc Gasol ignites the @memgrizz to home win with 25 points and 13 rebounds! pic.twitter.com/5imli1Q4Um

Same for Mike Conley, who for the million time was absolute nails down the stretch.

Conley did get got once by the DSJ, who posted a respectable 9/9/3 in his second straight impressive game against Conley.

Dennis Smith Jr gets inside for the SWAT! #MFFL pic.twitter.com/G13GCDb1cX

This is going up at 4am but by the time you read it there might not be a seat left on the Blake Griffin MVP bandwagon. ALL ABOARD BABY. CHOO CHOO.

(For the second time this week.) pic.twitter.com/44OVks2SpT

Nobody is more juiced than this guy.

This Clippers coach is fired up. pic.twitter.com/AxA39mpyOG

Blake went for 25/8/5. Scored 16 in the fourth. Absolutely dominated the Blazers bigs in the post. And capped it all off with that b-e-a-utifully stroked three for the win.

Blake is a new man. The Point God-less Clippers are now 4-0. And while I’m a firm, firm believer that you can hold two different thoughts at once–like that  you can still believe Chris Paul is one of the best players ever while also believing that this team just makes a lot more sense without him–the Ewing Theory stuff with Chris is far past the point of just “having legs”.

It has legs. It’s already gone from crawling to walking. And so long as Blake stays healthy I think it’ll be running by Christmas.

Also shoutout to Pat Beverley who’s been nothing short of amazing for the Clips. You couldn’t design a more perfect point guard for this team if you tried. The toughness, the leadership, the defense, the shooting, the ability to play off the ball. He is PERFECT. And has brought an edge–a real edge, not a Chris Paul & Doc Rivers whining about every call edge–to the most mentally fragile team in the league these last few years.

And don’t think I didn’t notice that perfectly executed subtle-enough illegal screen to free Blake at the end. Gorgeous.

Dame (25/2/6) and CJ (23/6/5) had good nights. But CJ left the door open for that game winner after clanking one of two free throws to leave it at a two point game. Brutal loss. But a very fun game for the rest of us!

Austin Rivers had a dislocation but fought through it to stay in the game. Much tougher than Gordon Hayward imho.

Austin Rivers finds out its prison rules out here and then has to have his dislocated pinky reduced pic.twitter.com/7FUG8hdyLC

Boogie returned to Sac Town on what was obviously an emotional night for a very emotional guy. That dude loved the city and loved the fans. The last line in their tribute video matters a million times more than the trouble he had handling his emotions on the court. And I really, truly, genuinely do not give a single fuck if you don’t like that about him. Boogie Forever.

But this isn’t the time to argue that. This isn’t the time to dissect the Boogie Sacramento era. This is the time to appreciate the performance he just put on in what I’d actually call a bit of a revenge game against the King’s organization. 41/23/6 on 14-25 shooting. The first to post a line like that since Chris Webber, who was sitting in the booth sputtering his way through whatever he was sputtering about for four very long quarters. Absolutely dominant. And spurred 24-4 third quarter run to erase a 19 point deficit. Boogie forever and ever and ever.

He also got some help from Jameer Nelson off the bench, hitting four threes on his way to 18 points just five days after being acquired by Denver. And also from Jrue Holiday who went for 20/4/7 with one massive block and bucket on Garrett Temple.

.@Jrue_Holiday11 out here doing it all 🏀 pic.twitter.com/IGvLEhBfvU

lolllll why did Garrett Temple stare at it after like “I SWEAR SOMEONE WAS STANDING RIGHT THERE” 😭 pic.twitter.com/v6uuAZp5u1

Sacramento had some bring spots from two rooks.

We see you Bogdan 👀 pic.twitter.com/OkjTqQ9ASb

The Knicks are now the lone winless team in the NBA. Oh and hey by the way here’s an update on Luka Doncic’s stats through four Euro League games. If… you know… if you’re into that type of thing…

Kyrie though the Mecca court was the actual old Bucks court

I used to think he was trolling with the Flat Earth stuff. But man… now… I don’t know…

LMAO Kyrie thought they were actually bringing back the PHYSICAL court for the Bucks throwback night pic.twitter.com/VYeStttfMk

And lastly, shoutout to Gordon Hayward. Who at least from this picture seems to have a correctly positioned foot again. Get well soon dude.

And that’s it. Seven games on the slate tonight. Fun rematch in Minnesota of that Thunder-Wolves thriller from Sunday Night. And a big time backcourt matchup in Golden State between what I’d say are easily the two best backcourts in basketball right now. And yes I’m very well aware that James Harden has a teammate… I’d just like to see Eric Gordon do this a little longer to throw them in the discussion.  See you right back here Saturday morning.