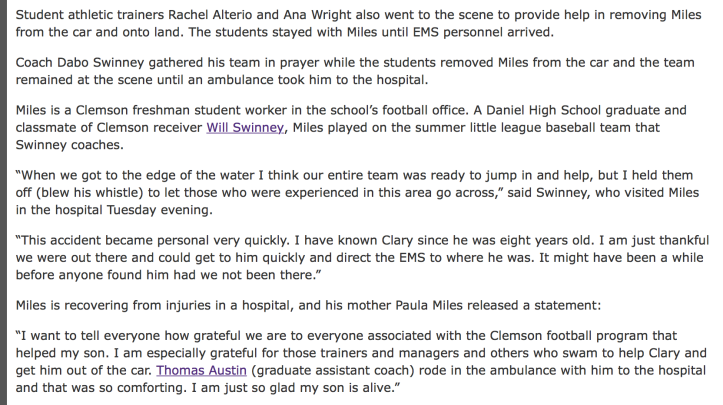 If Dabo wasn’t the most honest, upstanding man since a well-known stage actor entered the presidential box of the Ford theatre I’d think this was a hoax. I’d think this was a sham. I mean there’s simply no way. Here I am writing a glowing piece on the strength of the Clemson football program and the feeling of riding this high. The feeling pure, unencumbered joy that is being a Clemson fan right now. The confidence, the belief, the pride. It’s just… it’s unlike anything I’ve ever experienced as a sports fan.

My Tigers downright bullying the rest of college football right now. My winningest adult son Deshaun taken the NFL by storm and transformed the Texans into a contender. At the sight of an orange sweatshirt in the stands last night, my Yankees were inspired to mount a truly Clemsonian comeback. It’s… it’s almost surreal. Clemson football is a truly unstoppable force right now.

And now… now this…

THEY SAVED A GUYS LIFE.

Okay maybe they didn’t save his life but they still acted with poise and logic and bravery and helped a guy in real, desperate need of help. That’s dope. And maybe it has nothing to do with the defensive line’s dominance or Kelly Bryant’s breakout or Deshaun Watson’s leadership in the NFL. But in reality the culture that led to them saving this guy’s life is exactly what led to all of that. Clemson Football is at the top of the mountain for a reason.