LaVar plans to homeschool LaMelo. Joel Embiid runs the streets of Philly like Rocky. NYC Subways are calling the Knicks Hopeless. Oh and yeah, there were some basketball games on last. It’s the Ham’s Hoops Roundup for Tuesday October 3rd, let’s go…

Stunning news: LaVar Ball said he is pulling junior LaMelo from Chino Hills and will home-school him the next two years and train him.

Just spoke to LaVar Ball on why he's pulling his youngest son out of HS and home schooling him. pic.twitter.com/nvUprIJnew

I understand why this is a big deal, and also why people will be quick to criticize the move. Everything surrounding the Ball family has been, is, and will continue to be headline news not just in the basketball universe, but within the greater sports and pop culture landscape. LaVar and two of his kids (#LiAngeloHive stand up) move the needle.

But the reason this is headline news is the exact same reason I see this as the logical move. LaMelo is a star now. He’s as recognizable a face to young NBA fans as any player in this league. You might scoff at that, but it’s true. He’s genuinely famous. And genuinely famous kids can’t live normal high school lives. Sports is still entertainment – especially basketball. And to act like LaMelo is any different from a teenage pop star because his stage is a court is ignorant of the way the world works. Millions of people care what he does, no matter how overrated you think he is or how wrong you think LaVar’s methods are.

Is it smart to isolate him like this? I don’t know. I’m not saying I agree with it or not. I just think it was logical based on the circumstances. And more than anything I just think it’ll be a fascinating experiment to watch.

The other thing… and I don’t want to go on forever here because this topic needs much more time… but the other thing is… what’s actually wrong with what LaVar is doing? Haven’t we all already decided what a sham it is to call these guys “student-athletes” for the five months they’re at school? And seen the shadiness of AAU? And uncovered the corruption of the sneaker companies and their connections with these big universities? LaVar is rebelling against a nefarious, unethical system and doing so very openly. Maybe you don’t agree with it. But I have a hard time finding his methods even remotely as dishonest or corrupt as the status quo.

Joel Balboa Takes To The Streets Of Philadelphia

I’m speaking now as someone who’s seen this clip before it truly blows up – but it does kind of feel like Embiid crawled through 500 yards of “Joel Embiid social media saturation” shit smelling foulness I can very much imagine and came out clean the other side. Now it’s just a very funny move from a very funny player who has embraced the culture of NBA Twitter better than any single player out there. I mean look at this. He’s literally running the streets of Philadelphia like Rocky. Shit, if he keeps this up and stays healthy maybe the city of Philadelphia will put up a statue to a non-fictional black athlete.

Dame D.O.L.L.A. Is Back With Those Clean Bars And Those Dutch-Splitting Fingernails

My 2nd album #CONFIRMED drops Friday on all major digital music platforms. The story behind the name and cover art: https://t.co/OSOJOOKTsp pic.twitter.com/YD1mn3MJbb

Dame’s a talented rapper, no denying that. I don’t know if I have it in me to listen to his album. Last one did nothing for me. But nothing against him doing his thing.

What I do have against him is the fact that he made me look at those atrocious fingernails on his album cover. I mean did no one want to point out to the clean, drug-free rapper that his nails look primed for splitting a dutch and are about a week away from coke nail range?

And look you’ll never catch me saying these guys can’t have hobbies or second jobs in their free time. LeBron has a multimedia empire and a family he spends time with. Durant is managing a bundle of burner twitter accounts and recording two hour podcasts with Bill Simmons twice a week. There’s no reason Dame can’t write and record music. To pretend that every second has to be dedicated to basketball is outrageous.

But part of me has to wonder if Dame has even touched a court in the last month with that fingernail growth. Anyone who’s ever played knows how susceptible you are to breaking or ripping you nail off on a basketball court. And you can’t tell me Dame’s been hooping with those jersey shore ass nails all this time. Do us all a favor and use one single D.O.L.L.A. at your local CVS on some nail clippers, Dame. That’s disgusting.

Things Are Off To A Good Start In OKC 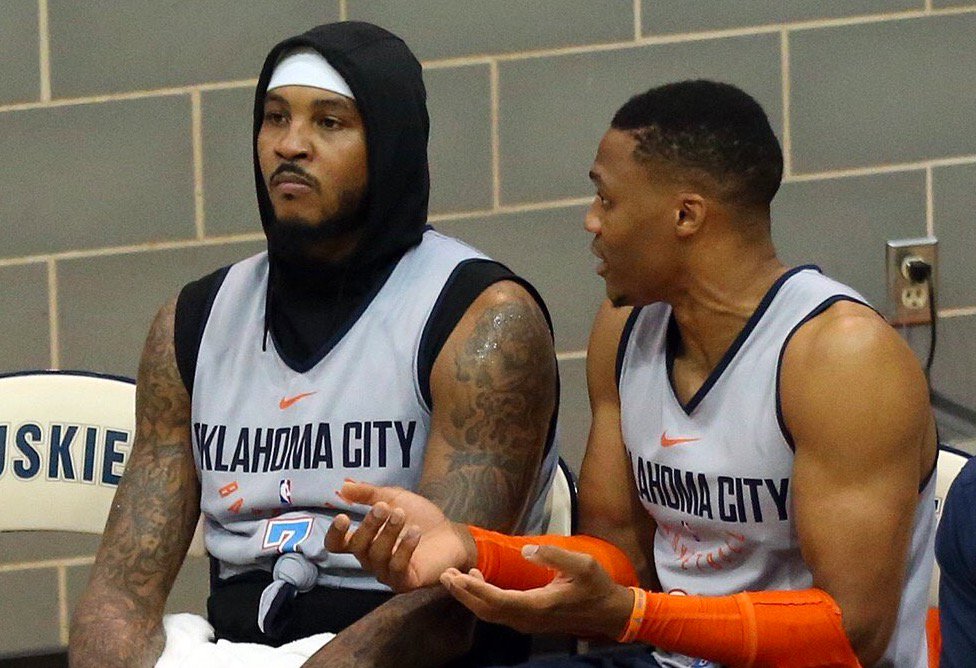 I still very much hold the opinion that it’s gonna work in OKC. I think Russ knows he can’t win unless he makes some offensive concessions and cares more about that than anything. I think Paul is happy to play second fiddle and showcase the versatility of his game finally playing alongside guys who can carry the offensive load. And I think Melo is at the point of his career where he’s happy to lighten his load and get open shots, but most importantly is eager to take on a role as a the preeminent “older brother” figure in the league.

But if it blows up, good lord will that be something to see.

And They Say There’s No Truth In Advertising? Ha… 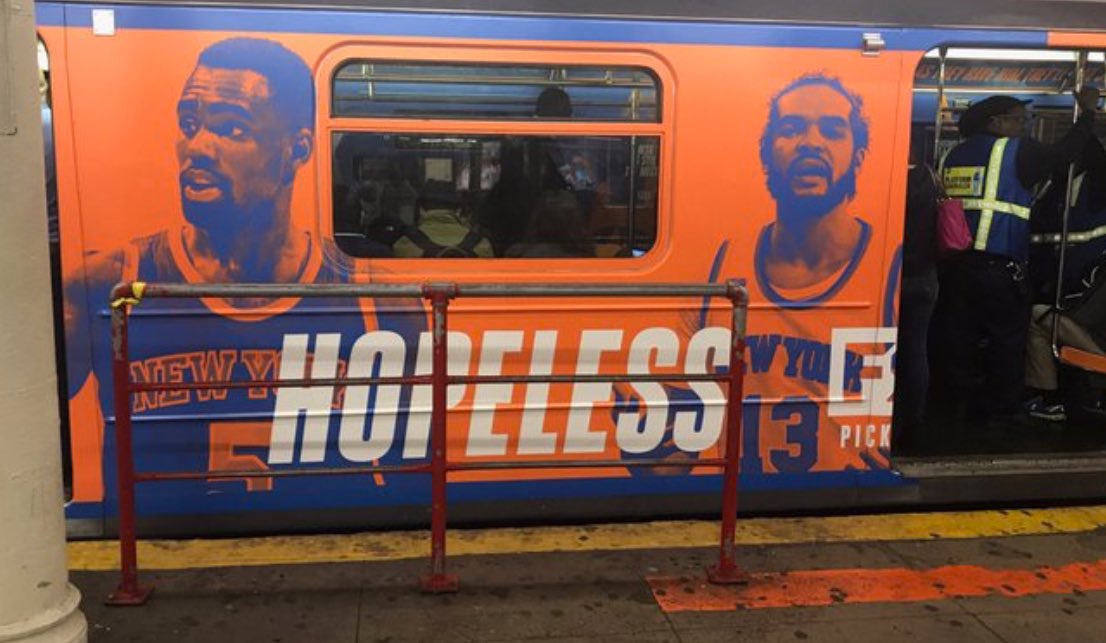 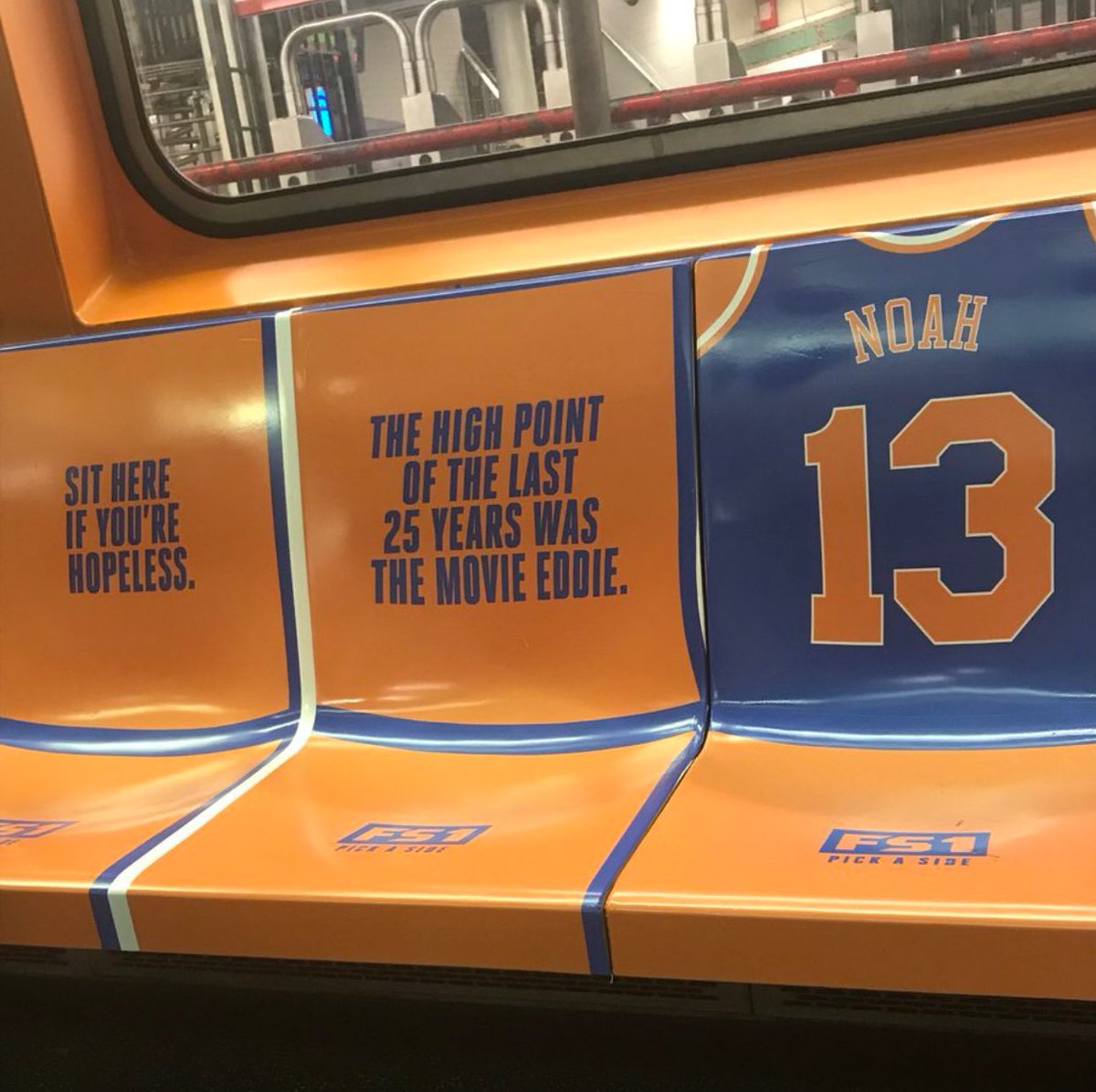 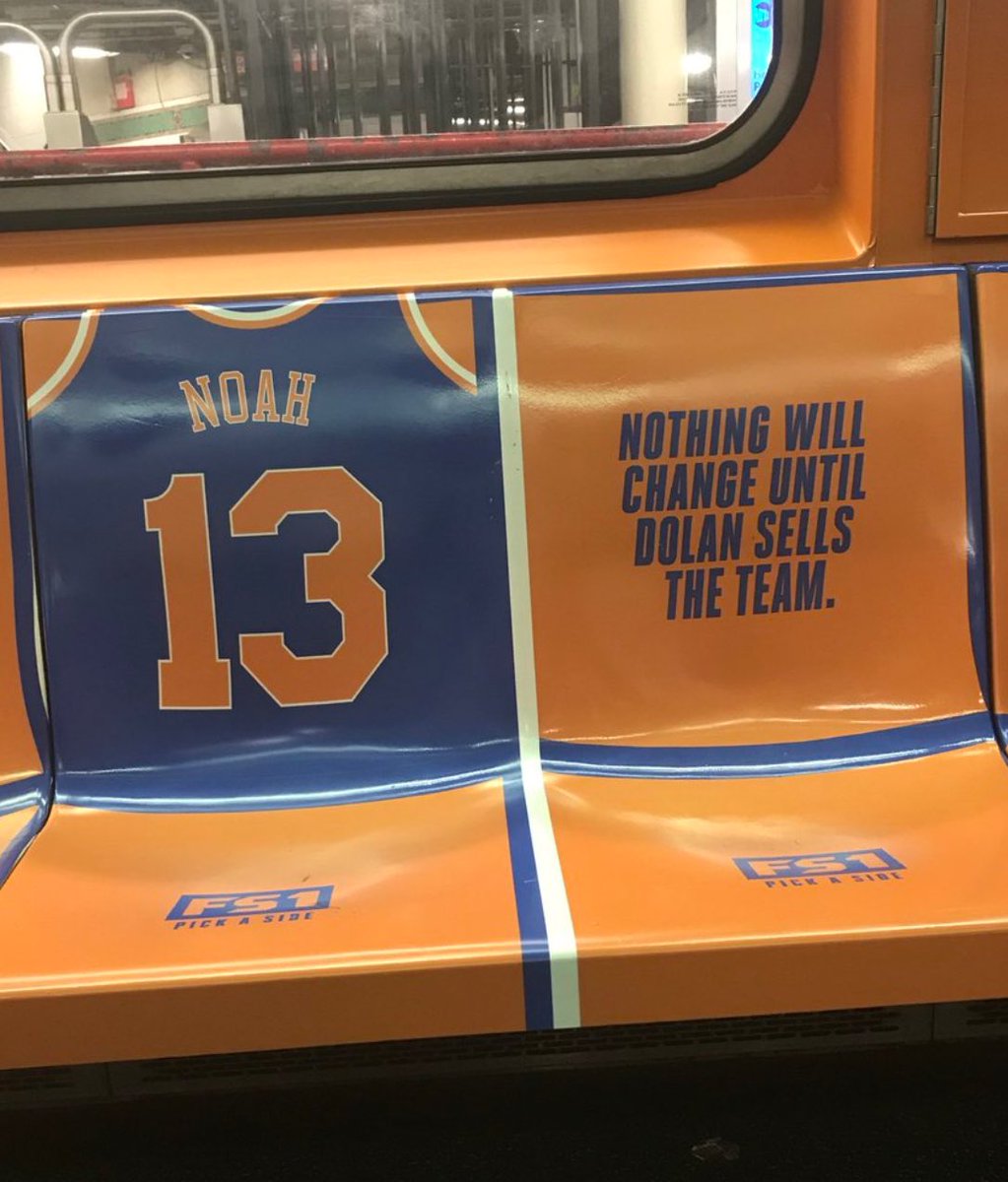 I get it. I defeinitely get it. But things are changing. Phil is gone. Melo is gone. We have a competent GM. We have two franchise building blocks. We’re tanking like we should. Things are looking up. It’s going to change. Haha. Hahaha. HAHAHAHAHAHA. I’M NOT CRAZY. Hey man what’s with that big needle? What the fu–

Frank Is Fine. Frank Is. Fine. EVERYTHING IS FINE.

I’d like to preemptively apologize to Ramon Sessions and Jarrett Jack for all of the terrible things I’ll write about them this year. Nothing personal fellas.

I See No Lies 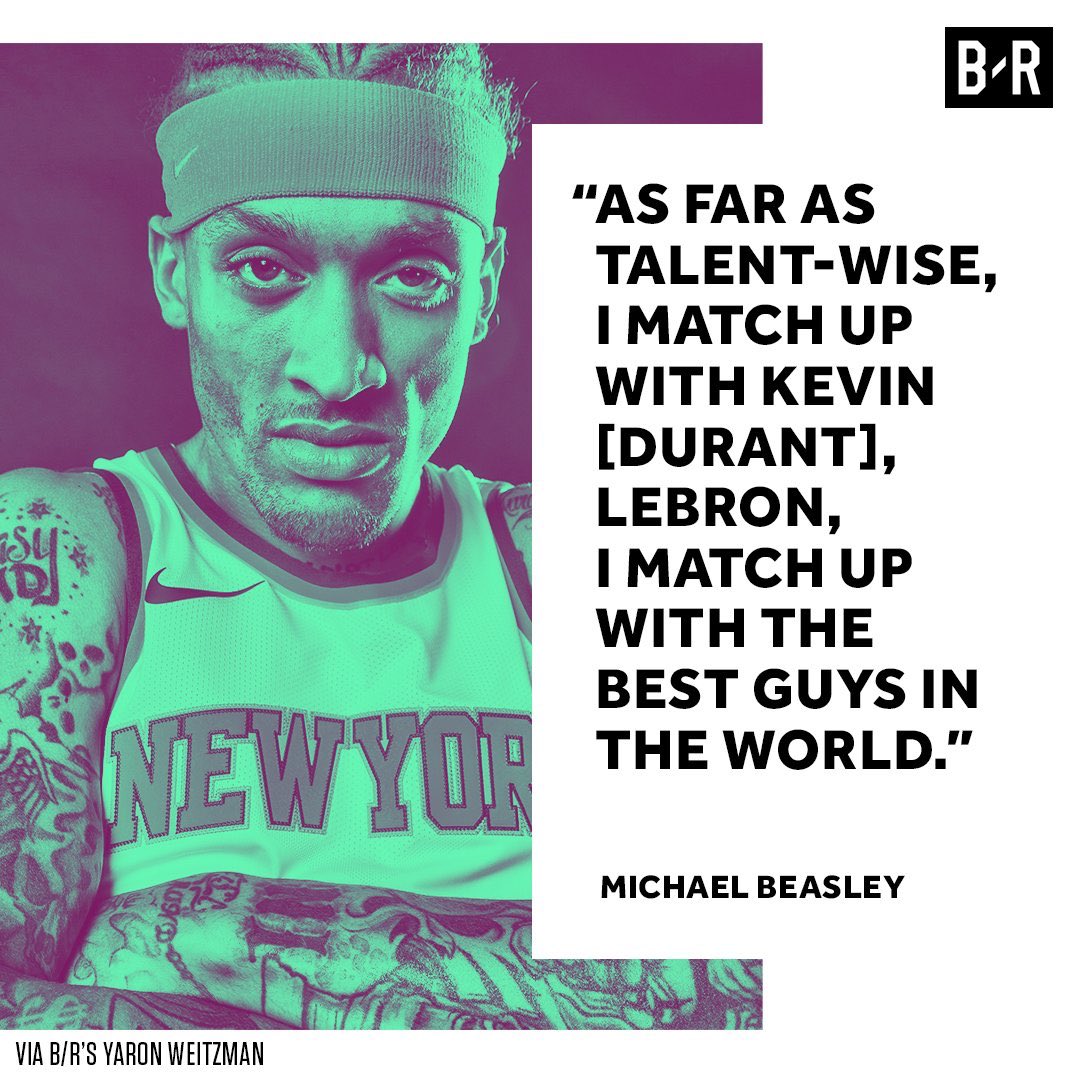 Read that. Then read it again. What does it say? Does it say better than? Does it say as good as? No. It says talent-wise. And that’s not really that outrageous a statement to make for a guy who was once the most dominant player in college basketball.

So much of basketball is about situation, and Super Cool Beas has never been in the right situation. Much of that was his own fault. But part of that is organizational dysfunction. Now that Beas has a clear mind…

and is with a stable, well-run organization (see above), there’s no reason that talent can’t be actualized at this point.

The Rookie Point Guards Are Gonna Be Fun

Kyrie In Green. Dwight in… Teal?

Kyrie shows off the bounce for Boston! #NBAPreseason

Kyrie as a Celtic is weird

Dwight as a Hornet is oh my god who tf cares