Ham’s Hoops Roundup Tues. Sept. 26th — Anything To Talk About From Media Day?

Media day! First day back! All smiles! Fresh starts! New faces new place! Goofy pictures! Commentary on the complex racial and political issues of our society specifically in regards to attacks made by the President on athletes using their first amendment rights to protest those issues!!!

Just another boring old media day am I right guys?

All the Trump/Protest commentary is saved for the end. Let’s fly through the rest of the topics first. Here we go…

Is Hoodie Melo Here To Stay? 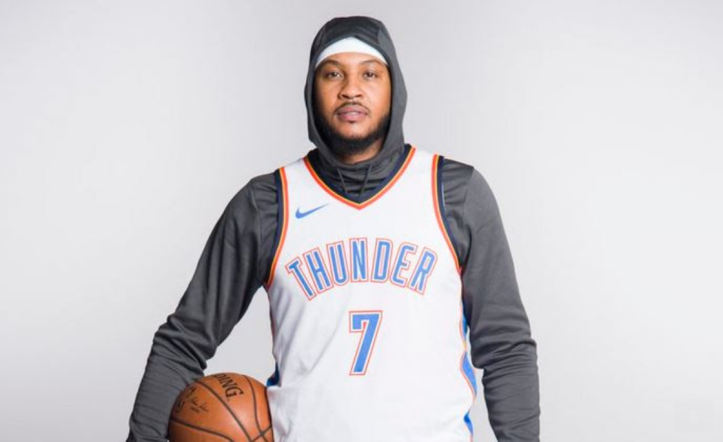 So… do we think he actually goes Hoodie Melo on the court this year? I know it sounds wild – but I don’t really see why he couldn’t. Is it really any different than wearing a mask? As long as he’s wearing that form-fitting material and he can hear his teammates I feel like it’s gucci, right?

I’m not one to say the regular season doesn’t matter. It does. And it matters even more for a team that’s very clearly going all-in for one year and has to get as comfortable as possible for the Playoffs. But I also don’t hate the idea of Melo pulling out Hoodie Melo for a game for shits and giggles – kind of like when Larry Bird played that whole game lefty.

Also I know Melo laughed this off and it will never happen but I don’t hate the idea of Sixth Man Melo coming in to get his few minutes of Iso Ball every now and again. Think about it… Hoodie Sixth Man Iso Melo coming in with Russ and PG on the bench and the complete freedom to take every shot? He genuinely might never miss.

Hard to keep up with Twitter today, but this is outstanding pic.twitter.com/xQ1QtlZVy8

“You ever been on a boat?” pic.twitter.com/kERSjhp8hq

Of all the running jokes in the NBA Twitter universe, white women boat party Kyrie might be the single most underrated. Man loves himself a white women boat party and as someone who once lived in the city of Boston for a year I can confirm that there is plenty of water and certainly no shortage of white women. Is that why he chose Boston? Of course not. Brad Stevens is an elite coach and that’s a smart, well-run organization and the reigns are his to be the leader of that team. But I don’t think James Harden dislikes the strip club culture in Houston and I don’t think Kevin Durant dislikes the access to Silicon Valley in Golden State and I don’t think Matthew Dellavadova dislikes the midwestern grit of Milwaukee.

Doris Burke Gets Her Due

Sports Illustrated (Deitsch)  —  In a career that has seen its share of trailblazing assignments, Doris Burke is about to add another first to her resume. This week ESPN will announce that Burke will become a regular ESPN NBA game analyst. She will serve as an analyst for ESPN regular-season NBA telecasts as well as the NBA playoffs, making her the first woman at the national level to be assigned a full season rotation of games as an NBA game analyst. Over the last couple of years Burke has worked selected NBA games as a color commentator but now gets cemented as a regular. Burke said she will keep her role as lead ESPN NBA sideline reporter for the NBA Conference Finals and NBA Finals.

Big shoutout to DB, who earned the fucking shit out of this. And look I’m not just dropping fucking shit there just to drop it. She earned the fucking shit out of this. She’s bouncing around from the sideline to the booth to the studio to the WNBA to college and back and does it all with ease. All different roles, all with different expectations, and she’s always prepared. There are people with one of those jobs who bring absolutely nothing to the table but their own clout. She’s easy to listen to. She’s good with the back and forth. She’s just fucking good at this. And in an industry where often times the pioneers don’t always get the reward of reaching the top of the industry, it’s dope that Doris is the first to do this. DB Gang forever.

I can’t find a list of who else from the 2014 Draft Class has signed an extension yet and it’s driving me a little insane. But I think Warren is one of the first. The biggest one to watch is Wiggins, who’s been in negotiations with Minnesota for the entire summer but hasn’t put pen to paper yet. The deadline of October 31st for these extensions is still a ways away. But keep that in the back of your mind over the next month.

The Mike Beasley Experience Is Off To A Roaring Start

Michael Beasley high as fuck, he landed in NY and went straight to the plug 😭😭😭😭 pic.twitter.com/hch7qsy23y

Okay… Any Thoughts On The President, NBA?

Spurs coach Gregg Popovich: Time to decide "the decent America we all thought we had and want is more important" than Pres. Trump's conduct. pic.twitter.com/ImnHDOP43b

Gregg Popovich: 'We still have no clue of what being born white means.' pic.twitter.com/whTL7y4ktu

Shouts to John Wall, who nails it. (h/t @CSNMA) pic.twitter.com/1rEv7zLegq

Michael Jordan on Trump: "Those who exercise the right to peacefully express themselves should not be demonized… " https://t.co/KbCySCuhua pic.twitter.com/Gso4fS9DTD

JJ Redick sounds off on Donald Trump: "I'm not sure that he understands the definition of the word 'privilege'" pic.twitter.com/6wEn4N2mvX

Steve Kerr with the stiletto between the ribs. pic.twitter.com/er8mijHRNW

Steve Kerr on the tradition of visiting the White House and why Trump made possible visit "very difficult for us to have to reconcile." pic.twitter.com/UalScZaOkp

I love the NBA. It’s gonna be absolutely fascinating to watch what happens with the NBA over the next few weeks with this.

Just asked Dwight Howard if he'd go to the White House if he won the title (his goal). "I'd go to Dwight House."

You are just the absolute worst dude.