I have had a ton of emails and texts asking me if this website is real… https://t.co/RRVgISDFeq The answer is an absolute YES. pic.twitter.com/uYCUg6mjW1

The next day, you’re the authority.

It’s that Kid Rock truly cares about the city of Detroit and the state of Michigan. Kid Rock cares about his community. He’s not a Washington insider. He’s a Detroiter. He’s one of us. He’s you. He’s me. Does he have political experience? No. But he’s a successful guy and he’ll use that work ethic and passion that got him to the top of the entertainment business and direct that towards making Detroit great again. Because for all the accolades and the wealth, all he’s really ever cared about is his home town. He’s gonna march to Washington and kick some DC insider ass. That’s why Kid Rock is getting elected.

Just kidding it’s all about our obsession with celebrity. This country is absolutely fucked.

“The Bawitdaba Caucus, led by Senator Rock, introduced new da bang da bang diggy legislation on the Senate Floor today” is a thing that will lead the CNN News Block in 2019. WATTBA.

The only real obstacle in his way is the fact that 60% of his supporters might genuinely not know his real name when they have to check a box on election day.

P.S.   This sequence of tweets had me rolling.

The “kid rock for senate” site is real… stay tuned for a surprise announcement.

Gee, Kid. Couldn’t possibly imagine what it might be. 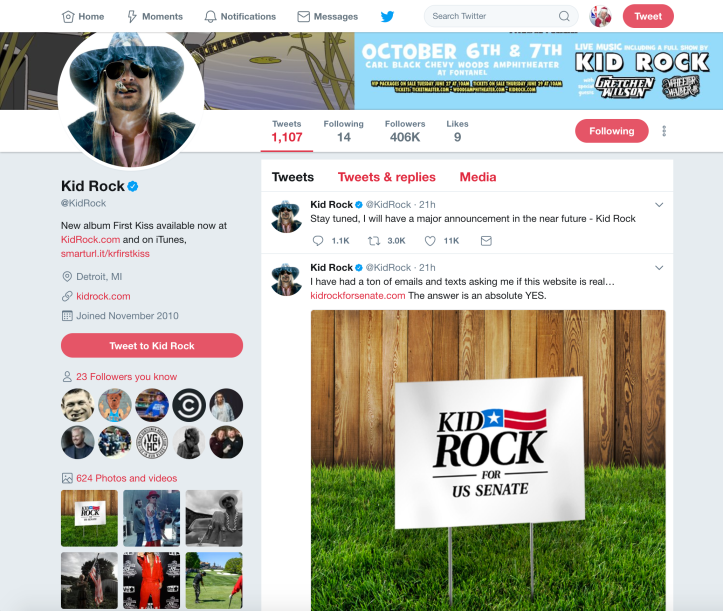