Ultimately, This Warriors Team Is Great For The Sport Of Basketball 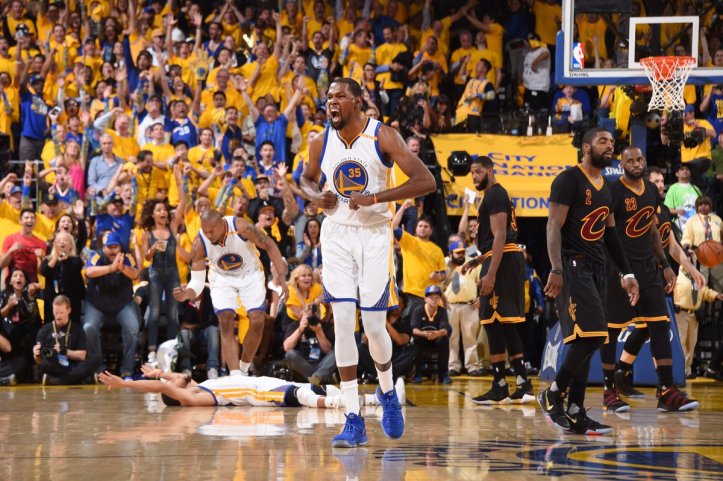 Right now we know the Warriors are going to win the 2017-18 title, and that’s not a good thing.

Like I said last week, two Superteams can play. ESPN is about to run a two-night 30 For 30 on the Celtics-Lakers rivalry. We always have and we will always love predictability when what’s predictable is an ultimately unpredictable clash of the titans.

We were well on our way towards that this season with Cavs-Warriors III… right up until Kevin Durant chose the Bay. And as much as we all knew we were kidding ourselves by giving Cleveland a chance, we were still able to trick our minds into believing, right up until last night, that LeBron could do the impossible.

Now? Now next season is truly predictable. Nobody is beating this Warriors team as currently constructed. And nobody can do enough within the confines of the cap to build a team to beat the Warriors.

It’s not just that you can’t overwhelm them with more talent. No team has the resources to do that. But you also can’t, in just one season, master a brand of basketball better than theirs.

The thing is though… that’s where the hope comes in.

That is why the Warriors are good for basketball. Yes, it sucks to already know they’re going to win again next year. Yes, it sucks to lack any semblance of parity. Yes, we all want less predictability in sports.

But to put it plainly, the long term good of this team will greatly outweigh the short term bad.

It’s because of that brand of basketball they play. Not just the way they’ve played these last three seasons, but more specifically how they got an outside superstar like Durant to buy into their methods. It’s not just that Durant sacrificed shots… it’s that he cut off the ball and kept moving when plays weren’t set for him. It’s that he set screens, and not just when he was involved in the play. It’s that he expanded his overall offensive arsenal because he was shooting less. It’s that he embraced that a lightened offensive workload mean more would be required of him defensively. It’s that he understood that this system would make him a more efficient and more productive and ultimately more successful basketball player.

What he really did was confirm–or in some cases reveal–to the basketball world that the Warriors style wasn’t just predicated on their personnel.

They don’t just play this way because they had Steph and Klay and Draymond. Yes, they played it so incredibly because those three are so great. But they ultimately play this style because it’s the right way to play. Any type of player can fit and succeed so long as he buys in. And while that may have seemed obvious prior to Durant arriving in Golden State, I think it was really, really, really important for coaches and players to see that validated.

People can and will try to diminish this title. Durant will be criticized from now until eternity for choosing to come to a 73 win team. And the idea of “superteams” will always, ALWAYS have it’s detractors.

But what nobody can possibly deny is how fun and how easy the game looked to Durant this season and specifically in these Finals.

Players want to have fun like that. Coaches want to coach teams like that. And the ratings bear out that fans want to watch that.

We’ve built up this ridiculous narrative in our heads that players want to or, more ridiculously, need to take the hardest possible route. And yes, of course these guys embrace and enjoy being challenged. But more than anything players want to enjoy the game. And seeing the way Durant enjoyed playing the game and how much that helped him achieve such heights is ultimately something that will encourage both the stars today and the next generation to buy into this brand of unselfish, sacrifice-oriented, joyful brand of basketball the Warriors have created.

More players will want to play like that. Which in turn makes it easier for coaches to coach like that. And as the Warriors style is embraced league-wide, the more fun and more competitive and more marketable the sport will become.

No, it won’t stop players from teaming up to create superteams. But the more widely embraced it becomes, the more competitive the league will become. Seeing the success that Durant, Curry, Draymond, Klay, Iggy, etc. have had by sacrificing and embracing the unselfishness of this system, despite their stature within the league, will influence the next generation in tremendously beneficial way. And that’s more important for the league moving forward than the predictability of the next one or two (or five) titles.

There’s oodles of young, hardworking talent. The vast majority of guys are as competent off the floor as they are on it. There’s as much young talent coming into the league over the next two years as ever before, which will serve to balance out the talent pool.

The league will still dominate the news cycle by means of the draft and free agency for the next month and a half. The 2017-18 regular season will still be chock full of fun storylines and interesting characters. And no matter the predictability of next years Finals, the NBA is still far and away the most compelling league to follow and discuss from a year-round basis.

Yes, the NFL is still the NFL. But the free agency of Gordon Hayward, a borderline top 25 player, will be more discussed than any NFL transaction since Peyton to the Broncos. That matters.

Predictability sucks. There’s no way around the fact that the inevitability of the Warriors Championship will loom over any and every big game or captivating storyline or compelling transaction during this next NBA season. Everyone from the staunchest supporters of the league to it’s biggest detractors will think about that nonstop.

But the way the Warriors just played… and the way they got Durant to play… that’s more important to the long term success of this league.

And really, even knowing the outcome of next season, who’s not keeping their NBA alerts on full volume for the next two months.

Fuck me up Woj.