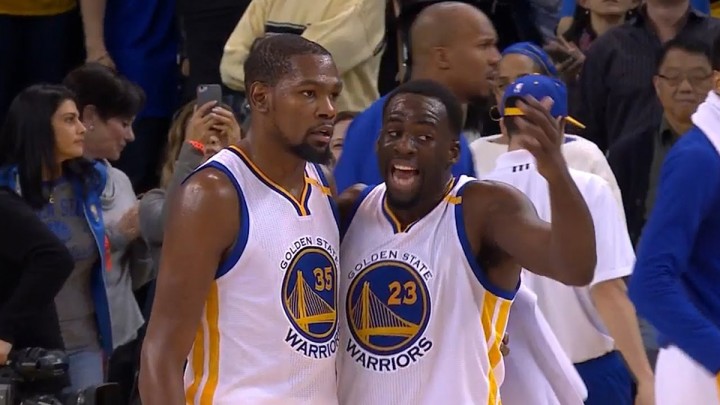 Zach Lowe  –  Green was already working on that as he left Oracle Arena after that gutting Game 7 loss. Green sat in his car in the parking lot and called Myers, telling him he had to sign Durant. “It’s on you,” Green told Myers.

Green hung up, stayed in the parking lot, and made another call — to Durant. “That was my very next call,” Green said. Two weeks later, Durant signed a maximum contract that put him in a Golden State uniform for at least one season, with several more seasons likely to come.

Hmmmm. Kind of sounds like Draymond Green broke a rule or two there, huh, @AdamSilver? Last I checked, the league doesn’t allow you to recruit players until July 1st. And if recall correctly, Game 7 of the 2016 NBA Finals was played on Sunday, June 19th. Hmmmmm. HMMMMMMMM.

Look, I’m not saying Kevin Durant has to go back to Oklahoma City. That would be preposterous. All I’m saying is we void these Finals, take KD of the Warriors, start the series over, suspend KD for next season, and then allow him to sign with another team after that. In my mind that’s a reasonable request. Honestly I don’t even care just take him out of this series so that it can be a fair fight.

God damnit I hate everything. This blog stunk. I can’t even write a good take. I’m just depressed. God damn you Kevin Durant.