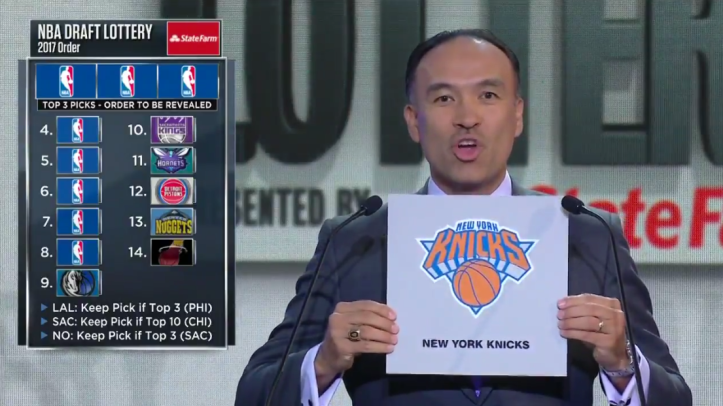 The NBA Draft Lottery was last night… let’s see how it went for my Knicks. Lottery karma has to be on our side, right? Not necessarily the franchise itself. Not a franchise run by a fat incompetent legacy kid whose dwarfish stature still vastly outsizes his character and who on a regular basis shows blatant disrespect and even open disdain for the fanbase. Not a franchise guided by a stubborn, vindictive asshole putting in the bare minimum of effort while collecting an eight figure check to half-heartedly helicopter coach while demanding his team play a style of basketball so preposterously ill-fitted for today’s NBA that the players have openly revolted against it. The franchise deserves nothing. If you want to talk karma, true karma would be Madison Square Garden collapsing on itself with James Dolan and Phil Jackson locked inside.

But the fan base? The fan base needs something. For all the shit that Knicks fans have had to deal with for the last twenty years… both on and off the court AND in and out of the court room… nobody deserves a win more than us. Nobody. Not the Browns, not DC sports, nobody. And it’s not even close.

Karma has to be on our side, right? Add in those plucky, upstart, end-of-the-roster players refusing to lie down in game 82 and losing the coin flip with Minnesota and… I mean, come on. It has to go the Knicks way. At the very worst we just keep the 7th pick in a 7 person draft, right? Let’s see how it went…

The @Celtics win the #NBADraftLottery and will select first in the 2017 @NBADraft presented by @StateFarm! pic.twitter.com/skG9oLjFGU

Aaaaaaaaaand there it is.

Look… I like my life. It’s pretty cool. I’ve been pretty fortunate. #Blessed, you might say. Great parents. Great siblings. Great friends. No health problems despite being a fat mess. No real life or discrimination problems because I’m a white guy. All in all my life is pretty dope. Not a lot, if anything, to complain about.

But god damnit if the New York Knicks don’t make me crave death on a regular basis.

Every time Phil Jackson speaks, a little more of what’s left of my darkened soul rips off, sets on fire in my chest*, and deteriorates to nothingness. I will never get that part of my soul back. That’s on you, dick.

.@PhilJackson11: "We look forward to a young player that we’ll be able to draft next month.” #KnicksDraft17 pic.twitter.com/IudqTRjRbR

Does all of this mean my hilariously pointless optimism won’t break through? Of course not. The only thing keeping me from sucking down that bottle of bleach under my sink is the knowledge that there are multiple stupid teams drafting ahead of the Knicks and that, after Fultz and Ball go 1-2, the rest is an absolute crapshoot.

Jackson and Isaac will both go before 8 so they’re probably off the board. Tatum will probably go before 8 too. Monk could go third, but if not could very well fall to eight. Sacramento and Orlando both need point guards but are such wildcards that there’s no telling which of Fox, Smith, and Ntilikina will go where. Someone is going to reach for Markannen too early. I don’t know. It’s just an absolute crapshoot.

Because this is a blog and every blog is required to do a mock draft, here’s my (extremely optimistic) snapshot guess for now…

There was a basketball game last night. The Spurs were without Kawhi Leonard again because Zaza Pachulia is sentient yet talentless garbage. You want a take on it? That’s my take. Zaza abso-fucking-lutely knew what he was doing with that extra step. He might look like a fucking oaf out there but you don’t make the NBA without an acute awareness of what your body is doing and where you are relative to other players on the court. Stop pretending like this was an accident. You and I both know that you don’t believe it was unintentional. Zaza is a piece of shit and ruined what could have been an awesome, competitive series going back to San Antonio 1-1. Now it’s 2-0 and we don’t know when or even if we’ll get a healthy Kawhi out there again. Game 3 isn’t until Saturday because of how the schedule works out, which I guess is a lucky break. But this series isn’t nearly what it very well could have been if not for Zaza being a gaping asshole of a human being. Thanks dude. From the bottom of my heart and hearts of every other NBA fan, go fuck yourself.

Schedule for Wednesday, May 17th: