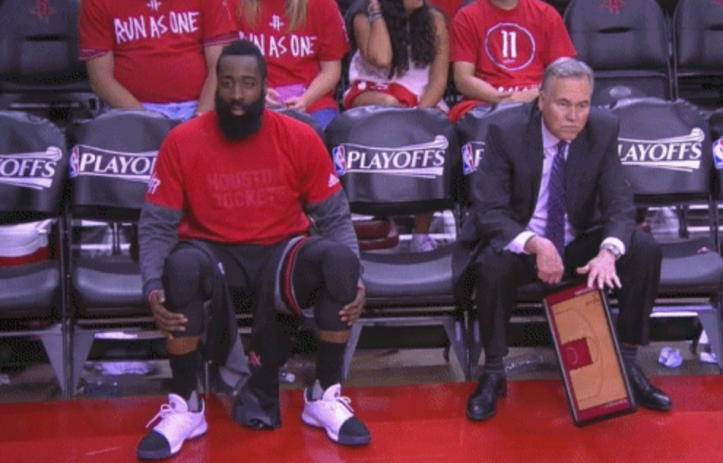 FIVE. Five Hall Of Famers. Not one, not two, but FIVE. One,two,three,four,FIF. What do the five hall of famers say to the face? You rolling something up? I got five on it.

God damn what a flex.

I’m so happy we have this man in our life

A text from a league executive: "Has an NBA player ever been investigated for point shaving?"

I don’t even know how to analyze what happened. And I know I usually say something like that and then start to ramble on and eventually figure it out. But I truly, genuinely, don’t know what just happened last night. Once Kawhi was officially out you knew that the narrative of the Rockets blowing this game was there. You knew it was a possibility. But 39 points? THIRTY NINE? At home? In a must win? Against a team missing the second best basketball player in the world?

This should be the point where I write this thoughtful retrospective on the Rockets season. On the strides Harden made and on the redemption of D’Antoni and the way the two of them revolutionized the way we look at the point guard position and at offense as a whole. But they don’t even deserve it. Writing that after watching them poop their pants and sit in the mess at center court as Jonathan Simmons and Dejonte Murray and other end of the rosters Spurs ran circles around them just feels wrong. There will be time to look back at Houston’s season, setting aside the comatose effort that capped it off, and appreciate what they did.

That time ain’t today, folks. I’m not even bothering to post a single highlight or talk further about this game.

It’s over. Done. Wash my eyes out with soap and acid and prep for what I think and desperately hope will be a competitive Warriors-Spurs series.

What did I just say. Move along people.

Kawhi will be fine by Sunday. Anyone says otherwise I’m not hearing it. Does Pop look the least bit worried?

When you win Game 6 without putting Kawhi's injury at risk pic.twitter.com/oqJUMXZgAi

Schedule for Friday, May 12th:

Schedule for Sunday, May 14th: