Cellino & Barnes Are Breaking Up As Cellino Sues Barnes #RIP 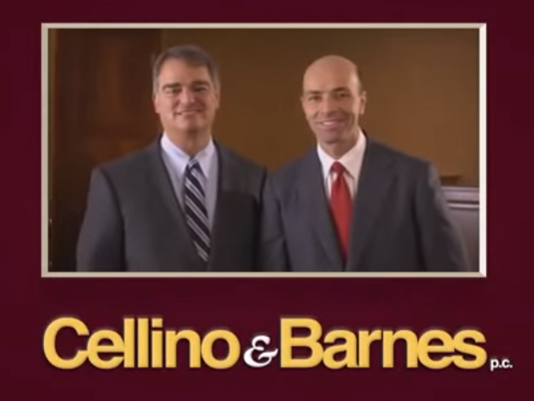 BUFFALO, N.Y. – You’ve all heard the ‘Cellino and Barnes’ jingle and seen their commercials.

But the longtime legal partnership between Ross Cellino and Stephen Barnes may be coming to an end.

Civil court documents that were filed Wednesday in State Supreme Court show that Ross Cellino is suing his longtime legal partner, Stephen Barnes, and the law firm Cellino and Barnes, in order to dissolve the corporation.
The documents show Barnes is scheduled to appear in court on May 19 to show why the firm should not be dissolved.
We don’t know why Cellino is suing to have the firm broken up.

I’m going to be honest here people… I don’t know if I can find the words to express what I’m feeling right now. Cellino & Barnes (commercials) are an institution in the greater tri-state area. Those commercials are as New York as a Yankee hat and a quick temper. You walk down the street humming this tune the whole sidewalk will start staring. If you’re from New York and you’ve watched television at any point in your entire life, you know about Cellino & Barnes. Shit, people outside of New York know who Cellino & Barnes are. Are they good? Would you hire them? Is it even a real law firm? I have no idea. Absolutely clueless. But I can sing you that jingle from here until the day I die. I’ve probably heard this song more than the voice of my own mother.

Or at least it was. Because now… now it’s gone. Cellino is going Cain and Able on Barnes and suing him with what I would assume is the help of real lawyers and a real law firm. I don’t know what for. I don’t know why. I just know that once you sue someone there’s no coming  back.

There’s no more Cellino and Barnes. No more jingle on our television screen once an hour on every channel at every point in the day that we’ll hear and still sing too because we just can’t help ourselves.

This is a sad, sad day in New York television history. End of an era folks. #RIP