Everything about your team revolves around the play of the offensive line.

Keeping your quarterback upright… allowing receivers time to get open… getting the ground game going… converting in short yardage… maintaining possession… running the clock… keeping your defense off the field… wearing down your opponent..

All of that starts and ends with the offensive line. Control the line of scrimmage, control the game.

The Giants are a good offensive lineman away from being a Super Bowl team. Go through the roster and that’s really all they’re missing. Some defensive line depth? Sure. A linebacker? Sure. A big time Tight End? Sure.

But that’s still a top flight defense. And between Marshall as a hybrid WR/TE and Rhett Ellison as a hybrid TE/FB those are two big, physical, matchup nightmares to play the tight end roll and give the offense some much needed versatility and size.

It really just comes back to the Offensive Line… and right now this group stinks. Pugh and Richberg are solid. Flowers might be redeemable on the right side. But that is not a Super Bowl Line. You can’t go into this year without a new left tackle. You just can’t. Which means that if… IF… Garrett Bolles or Cam Robinson is there at 23, you have to take them. Have to. It’s boring, but it’s what wins. The Giants have enough talent at the skill positions. They have a loaded defense. They need an offensive line. Take the offensive lineman.

…but god damn if I don’t want Deshaun Watson. God damn if I don’t want my winningest large adult son to stay in house. I’d love him to go off and have new experiences and meet new friends in Houston or New Orleans or Arizona. That would be great for him. But as a parent I can’t help but want him at my alma matter right up the road. I can’t help if I want to see him play for my team in the same uniform I wore growing up. I’m sorry. I know it’s selfish. But I just can’t help it.

And joking aside, that’s what they should do. If Bolles and Robinson are gone, the Giants should take Deshaun Watson. You take Deshaun Watson, take a tackle in the second round even if that means trading up, and then draft lineman after lineman after lineman on both sides of the ball for the rest of the draft to build up depth. Make Deshaun your Aaron Rodgers. Sit him behind Eli for the next two or three years and give him time to learn the offense before it’s time to hand him the reigns.

Not only is it what they should do… it’s what they will do.

I love Eli. I will forever love Eli. But Eli is 36 and has never missed a game. At some point age and injuries have to catch up. Jerry Reese and Ben McAdoo and the entire Giants organization know know it’s time to find Eli’s successor. Jerry Reese himself said he’s looked at quarterbacks more than ever before. And if an Offensive Lineman isn’t there at 23, I genuinely think they’ll take Watson.

Because why wouldn’t you?

He looked Nick Saban and a defense full of NFL starters in the eye TWICE and put up 827 yards on 63% passing for 7 TDs, plus another 116 and a TD on the ground. He threw 104 passes and rushed 41 times against a Nick Saban Alabama defense and turned it over one time. ONE TIME in 145 attempts. All on the biggest possible stage. Oh yeah, this was the result:

We talk all the time about the importance leadership at the quarterback position, and this guy is everything you’d ever want from the face of your franchise. EVERYTHING. There hasn’t been a better leader and winner in college football than Deshaun Watson in decades. Show me one guy who did more for and better represented his college team in our lifetime. I fucking dare you to try.

And it drives me up a fucking wall that he’ll be drafted after a guy with 8 wins in 13 career starts who tried and failed to change his name from Mitch to Mitchell. The NFL is so stupid it numbs my brain.

But because it is… you take advantage of that. If he falls in your lap at pick 23, you take advantage of that and secure the most important position in sports for the next 15 years. You don’t have to trade up. You don’t have to ignore need positions. It’s a logical long term decision that will save your team the agony of finding a new quarterback when Eli’s time is up. Add in that there are two stud young quarterbacks in the division and that’s even more incentive not to leave yourself naked two years from now.

You have a guy who’s one “flaw” is that he probably needs a year or two to learn the offense, and your team is perfectly set up to allow for that. Two years of tutelage under Eli, two star young receivers who will be entering their primes when he takes over, and a head coach who has actual experience developing the last future star quarterback that stupidly fell in the draft and sat behind the starter for his first few seasons. It’s so perfect I could cry.

This is far too long so I’ll just wrap it up here.

Draft a Left Tackle because we desperately need one but if one isn’t there then take Michael Jordan of football who flamed Nick Saban twice, went 29-1 the last two years, beat literally every great team, won the National Championship, and has all the physical and leadership qualities you’d ever want from a QB to be your Aaron Rodgers because the NFL is stupid and let him fall in your lap.

I love my son. 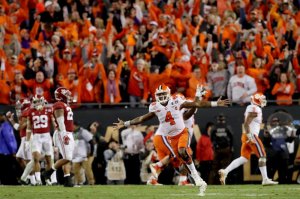 P.S.   For all the (much deserved) credit the D Line got, the O Line was just as responsible for those two Super Bowls. They kept Eli upright. They controlled the ground game. They kept the defense rested and ready to pin their ears back. They completely legally blocked guys off of Eli to allow for the Helmet catch. Diehl-Seubert-O’Hara-Snee-McKenzie. I’ll love that unit forever. Shoutout Rich Suebert.