Henry Kissinger Acknowledges That Jared Kushner Is Alive, Not Much Else In TIME 100 Write UP 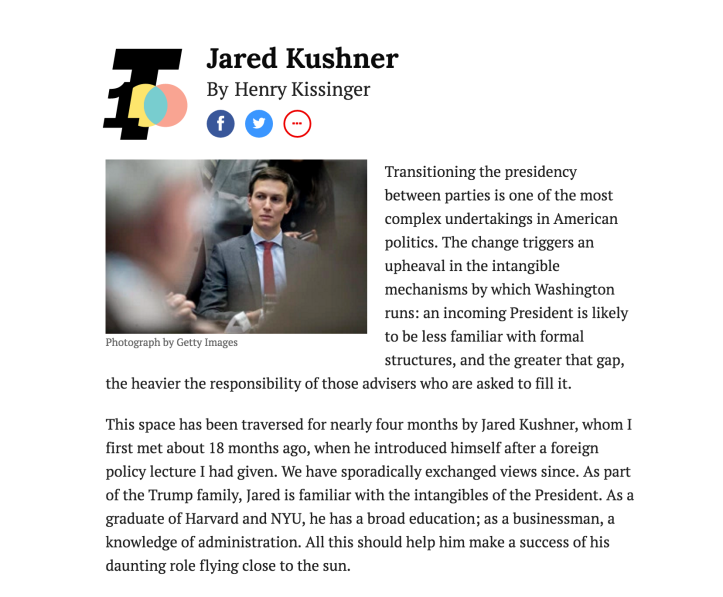 When you’re waiting for a compliment…

“Jared Kushner is, in fact, a person. I have met him and looked at him and, to the best of my knowledge, he is a functioning human being. He has hair and eyes and a mouth that mouth that I can confirm does speak words. I’ve been told Jared attended a school and then held a job working for a business. I have sent him emails, and he has, to the best of my knowledge, sent emails back to me. His job has been to transition the Presidency. After one hundred and something days, Jared is still working at that job and the President is, in fact, still the President. I worked for a President one time too. It was a very hard job. So long as Jared is still a living, breathing human being, his job will be very hard.”

Henry Kissinger is a former U.S. Secretary of State and, at the age of 93, is apparently far past the point of dealing with any bullshit.

P.S.   Kushner fascinates me. Dude looks like every other 25-year-old kid working in banking who you see out at a far-too-expensive NYC bar. Like if he walked into my apartment and my roommate said it was his buddy from college I wouldn’t bat an eye. And yet at this point in time he might honestly be the single most important person in the entire world — at the least one of the most important. He’s responsible for some of the most important real estate deals in the biggest city in the world, he’s the most trusted and influential advisor to the president, he’s orchestrated real estate deals with Chinese magnates and is now the most important person in dealing with the Chinese politically, and he’s THIRTY FIVE YEARS OLD. Maybe I’m just thinking wayyyy too House Of Cards-y right now, but it really does feel like Jared and Ivanka are pulling all the strings. Wild stuff.