Ham’s Editor’s Note:   this excerpt appeared in this morning’s edition of the Ham’s Hoops Roundup. Ham is both a narcissist and a fat lazy idiot, and has thus decided to repost the excerpt in the form of it’s own blog. It works twofold… One, as a vain decision that more people needed to read this excerpt… and Two, as an excuse to take a break from blogging to watch the Masters for a little bit. Vain and lazy as it may be – I commend him for the move. And I would not be surprised in the least to see him repeat the move with his Westbrook-Harden excerpt as soon as the TV coverage starts at three. Also, I’m writing in the third person.

Good lord dude. Is there anything quite like Lebron turning into Playoff Lebron in Boston? I mean is there anything like that in sports? Maybe Game Seven Bumgarner? Maybe Super Bowl Brady? Recent history, maybe Prime Tiger on Sunday?

I guess you could make the case for each of them. But those are really just about the guy and the game. The opponent and the venue really don’t matter. And that’s what makes Playoff Lebron in Boston so special.

There’s just a weight to it. The guy. The history. The rivalry. The arena. The fact that the Boston fans always bring it when Lebron is in town, only to have their hearts ripped out as a deafening silence falls upon TD Garden some time around the middle of the third.

There are times where you think guys like Crowder and Smart can match up with Lebron to a respectable degree. Last night he made them look like children.

And yes, he does that to a lot of players. There are moments almost every game, regardless of his level of engagement that night, where Lebron makes his opponents look helpless. But outside of maybe those last three Finals games last year, it never feels more pronounced than when he has it going in Boston. He just attacks and attacks and attacks on both ends and there’s nothing the Celtics can do. And with every passing transition dunk or set-up block, those hearty, deafening boos from the crowd just fade into silence.

Because for all of the Lebron hate — which as time goes on is really just directed at the stupid things he’ll say from time to time off the court — there’s nothing people can do during these games but sit back and mouth “wow” or “yikes” or “fuuuuuck” in stunned silence. It’s just a tip of the cap and a feeling of emptiness and a “fuck dude the T is gonna be a fuckin’ nightmare dude.”

And nowadays, probably a pick-me-up talk about how Fultz/Ball and Jaylon Brown and next years Nets pick will all be starting to peak right around the time Lebron finally starts to fall off. You know… whenever that day finally comes.

Because right now, folks, Lebron is still smack dab in the middle of his prime. Leading the league in minutes. Carrying a talented but largely apathetic Cavs team to another one seed. Posting very arguably the most impressive stat line of his career (27 a night on 54% shooting, 36% from three and 61% from two, career highs of 8.6 rebounds and 8.7 assists per game). And very comfortably knowing he can turn it on at any time he wants because he’s still the best basketball player in the world.

All while managing to balance out his place as one of the smartest and most socially conscious superstars with some of the stupidest, pettiest off court quotes and tactics you’ll ever see to the point that he comes off as an angsty teenager. The man can just do it all folks,,

And Golden State better not fit those rings just yet. 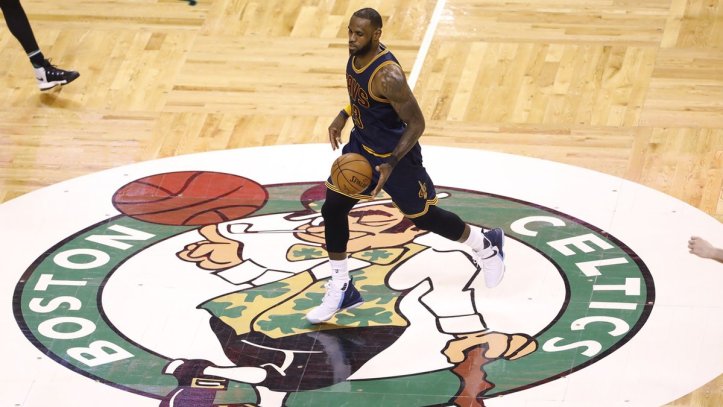