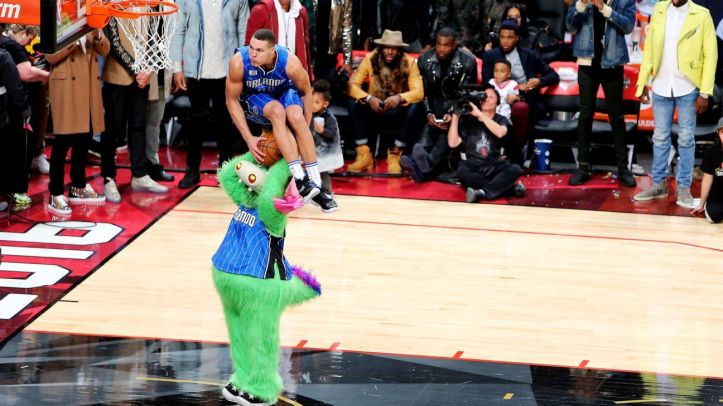 What’s up other people who are too obsessed with the NBA. It me, other person too obsessed with the NBA. It’s late Friday and All Star 2017 New Orleans is upon us. We’ve got some really cool stuff to watch for the next two nights. Overhyped? Probably. But cool nonetheless. So let’s take a look at all the events leading up to the big game (TM, NFL) on Sunday Night with some previews, predictions, and of course gambling odds. Here we go…

Kicking off the weekend we have the NBA Rising Stars Challenge. Same format as last year – Team USA vs. Team World. Here are the rosters and the MVP Odds of everyone involved.

I have no idea what the line on this game is. Took a whole 30 seconds to research it and came up with nothing. Sorry.

What I will tell you though is that the World Team is winning this game. Not only will they win it… they’ll win it handily. These games are about two things and two things only — big men who want to bring the ball up and three point shooting. The World Team has Nikola Jokic and my large adult son Kristaps Porzingis. Team USA does not. Now you may be saying to yourself, “Hey Ham, Team USA has Karl-Anthony Towns and Devin Booker”. You are correct. Those are players who exist.

But what you should also remember is AAU Culture. American players grow up being selfish and wanting to be superstars and the only coaching they get is the experience of watching someone yell at their teammates to give them the ball every time.

Foreign born players play the game #TheRightWay. Don’t believe me? Look at the Spurs and then look at Team USA Mens Soccer. Exactly. These foreign guys pass the ball and make cuts and have a more versatile overall game. They’ll have instant camaraderie and chemistry and run and pass circles around the Americans. Team USA? More like Team USAAU. Hammer The World and hammer those +500 MVP odds of my son Kristaps. Also throw a couple curt schillings on Nikola Jokic just in case the anti-New York media bias rears it’s ugly head come MVP voting time.

Saturday kicks off with the FreeCreditReport.com Skills Challenge. Again, same format as last year. There’s a smalls bracket and a talls bracket and the winners play each other for the title. Here are the odds:

If you’re reading this blog then you remember last year that a big man (Karl-Anthony Towns) won this competition. You want to know why? Stride length. It’s all about distance covered per step. You know who covers more steps? The tallest guy.

Kristaps Porzingis is going to win this competition. I’m not saying that as a homer or as an overly supportive father who calls the coach to complain about how the two selfish ball hogs on the team don’t pass him the ball enough. I’m saying that as a logical basketball fan and appreciator of the work of John Brenkus and the Sports Science team Kristaps will step through all the defenders, nail his pass, dunk from the free throw line, sprint down the court like a gazelle, and drain his jumper in record time. That’s not me saying it… it’s science.

Next on the list we have the 1-877 Cars For Kids Three Point Shoutout. No Steph this year, which means no more super interesting storylines about Steph and Klay going against each other that I was really looking forward to hearing again. Bummer. Here are the odds:

My pick? Glad you asked. It’s CJ McCollum and that smooth, easy stroke of h– alright you know what, grow up up guys.

CJ McCollum is winning this contest. Not to get all first takey here but KLAY THOMPSON WILL NOT HAVE THE MOTIVATION TO WIN IF STEPH CURRY IS NOT IN THIS CONTEST. I’M SORRY. I’M SORRY. CRAB RANGOON, THINGS OF THAT NATURE.

CJ is a burgeoning superstar. CJ is coming to New Orleans to make waves. And CJ McCollum is gonna come out here, put on a show, and upset Klay in the Finals.

As excited as I am for that, though, I’m more excited to see what Swaggy P does. Will he go unconcious and hit 24 in the first round? Will he not care at all and go two full racks without making one? I don’t know. There’s no way to predict it. But what I can tell you is that it’s going to be entertaining as all hell.  #NeverForget

And to close out Saturday Night, we have the FarmersOnly.com Slam Dunk Contest. Let’s take a moment to recognize what we saw last year.

That was special. Truly, genuinely special. Watching it again it’s pretty evident that Gordon should have won. And even in the moment it probably was too. But watching that live it was hard to not call every single one of those dunks in the final round a 50. How could you not? The only one you could really argue wasn’t was when Levine came from behind the hoops and went between the legs reverse. Even still though… that’s a 50 when removed from the moment.

We’re not getting that again. At least not this year. What really made it so special is that those guys hit every single dunk on the first try. Every single time, we got to react to something we didn’t know was coming. That just doesn’t happen. And to expect two years in a row of that is just dumb.

Could we get an awesome contest? Of COURSE. Gordon is back for redemption. And while LaVine isn’t here, Derrick Jones Jr. is one of the few guys who can compete with the type of spring LaVine has. Here are the odds:

DeAndre is a few years too late to get here. Sure, he could have something up his sleeve, but working against him is the fact that he can’t possibly top the in-game dunks we’ve already seen from him. Robinson has bounce… I just don’t think he can compete with the other two.

So it comes down to Gordon and Jones.

We’ve obviously seen what Gordon can do. Not only is he an absolute freak… he’s creative too. He managed to work props into his dunks without making it too much about the props – that’s hard to do in these competitions.

The problem is… we’ve seen it. I just don’t know how he can top what he did last year. It was so unexpected… so creative… so well executed… and I think that kind of works against him in a way. If he doesn’t raise the bar, he’ll get penalized for it.

Jones, on the other hand, has the benefit of anonymity. Not just in this specific contest, but throughout the league. He’s a D-Leaguer. A rookie who did next to nothing at UNLV. The only people who know him are basketball junkies who found his dunk videos on the internet. And those videos? Well…

Now look… I know I can’t write this without mentioning the James Flight White failure from a couple of years ago. Last time we had a guy like this, known for dunking and not really being all that good at anything else on a basketball court, it was a disaster. James Flight White took like 15 attempts at each of his dunks and flopped out before the finals. One of the biggest letdowns I’ve ever seen. So I get the concern.

I can’t see that happening again.

It won’t be the same as last year, but if it’s 80% as good that’s a win for everyone. Just don’t go into it with that level of expectation, and we’ll all enjoy it.

And that’s it. The All Star Game Itself is Sunday at 8pm. I’ll have a little preview of that in my Ham’s Hoops Roundup Sunday morning.

I’ll be on Twitter @yourboyham11 all weekend for the fun. Hop on over to twitter dot com and we’ll have some fun.