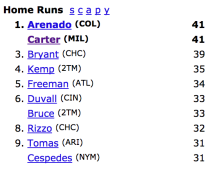 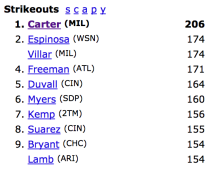 Love this move. Absolutely love it. Low risk, high reward gamble on a player who, despite his very obvious flaws, will provide the Yankees with as potent a pinch hitting threat as any team in baseball.

For those unfamiliar, Chris Carter is the prototypical DH. He’s an Adam Dunn type hitter – a guy who will hit 40 home runs while striking out 200 times along the way. He’ll barely crack the Mendoza line on the season, but when he connects on a ball it’ll travel. Last season 69 of his 122 hits went for extra bases. He’ll come in, swing his heart out, and hopefully swing a few games with one swing of the bat.

With the return of Greg Bird at First Base and the addition of Matt Holliday at DH, Carter will be a big bat off the bench. He’s 30 years old and plays a sub-par first base, and that’s totally okay. He’ll DH every few days or so and pinch hit a couple of times per week, and likely be told to swing away. And he’ll scarcely be asked to play first with Bird, Holliday, and Tyler Austin all likely on the 25-man roster.

Are there concerns that he’ll take at bats away from young guys like Bird and Austin? Of course. But if we’ve learned anything from this Yankees team the last few years, it’s that you can never have enough depth. Bird is coming off a season-long injury. Holliday is 37 years old and played only 183 games over the last two seasons. And Tyler Austin, while promising, has yet to prove he’s capable of being an everyday first baseman. If there aren’t enough at-bats to go around, the Yankees are still in the market for pitching and could use Holliday or Carter, both on very affordable 1-year deals ($13 for Holliday, $3 for Carter), as trade bait.

As currently constructed, the Yankees starting pitching is their weak point heading into Spring Training. They’ll need to score runs, and having a game-changer like Carter off the bench late in games makes this lineup that much more dangerous. If he outperforms the duties of a pinch-hitter and requires more at bats, that’s a good problem to have.

Pitchers and Catchers are right around the corner, and I’m starting to get pretty goddamn excited about this Yankees team and this entire rebuilding process. All the praise in the world to Brian Cashman man. Dude is a goddamn magician.