The Banana Boat Crew Is Up To Something 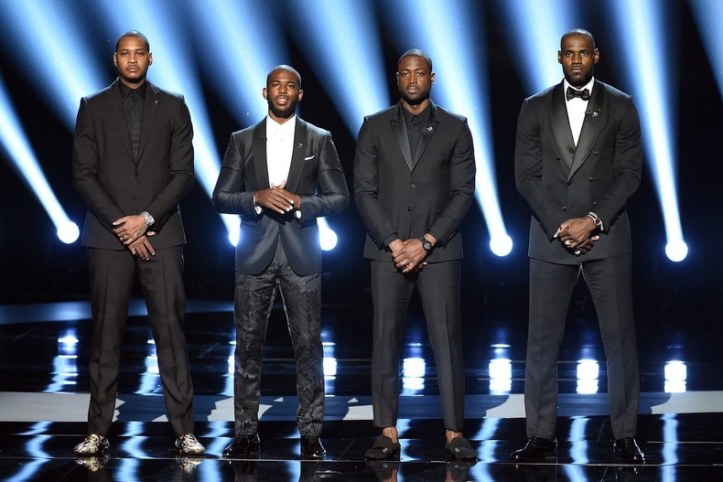 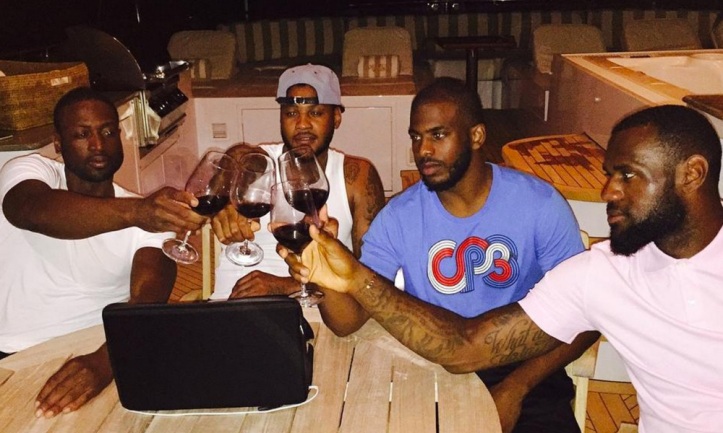 This is an idea from the Ham’s Hoops Roundup this morning (which you can read here), that I wanted to get it’s own blog.

The Banana Boat Crew is up to something.

Lebron, Dwyane, Chris, Melo. Something is going on with them behind the scenes. Something they’ve been cooking up for months, maybe even years. I don’t know what it is… but I can feel something coming on. It’s like my bones are starting to ache before a storm. A storm of takes, folks. Sorry.

Right now things are as low as they’ve ever been for the Banana Boat Crew, or as I like to call them for the sake of brevity, the BBC. Stop laughing.

The BBC is struggling right now. Lebron is the only one of the four to make the All Star Game for the first time since they’ve been in the league. And while he’s still at the top of his game, he’s made it well known how unhappy he is with Cleveland’s front office and their willingness to spend for more talent to counterbalance Durant on the Warriors.

Wade, as discussed at length in the Ham’s Hoops Roundup, is unhappy with his situation in Chicago despite the good relationship he shares with Jimmy Butler. The team made no sense on paper, and now that’s showing on the court and in the locker room thanks in large part to Rajon Rondo.

Chris Paul is currently injured and staring down the barrel of another Second Round Playoff exit, likely to Golden State. That is if they’re lucky enough to even get through the first.

And Melo is Melo. His situation in New York is as murky as it’s ever been. Phil Jackson is trying to strong-arm him out of town by openly discussing his trade prospects through the media. And despite his No-Trade Clause and desire to stay in New York, it’s reaching the point where he might finally give in and jump shit.

It seems like the BBC is in dire straights right now.

At least it seems that way.

Because with these guys, there’s always an endgame in sight. They’re too smart, too business-minded, too

This friendship extends far beyond the scope of a normal NBA friendship. They’re not buddies who all play the same sport. Because as fun as it is to make fun of them for their yacht trips and wine toasts and “brotherhood” posts, these guys actually are the most influential partnership in the sport.

There’s a reason Chris and Lebron, and Carmelo to a lesser extent, were the most influential figures in restructuring the Collective Bargaining Agreement. They’re working to secure more power for themselves from the hands of the teams and the owners, and it’s working. Lebron is the most powerful person in basketball, and has exhibited that on multiple occasions over these last three years. Chris and Dwyane are right behind him, and Melo has more of a stranglehold on his team and front office than anyone not named Lebron.

I don’t know what they’re up to, or how they could all team up/stack the deck in someone’s favor. But something is going to happen with these four. Something big. And it’s going to happen in the next seven months.

P.S.   I genuinely think Lebron wanted that Melo-Love trade to happen. I think he pushed for it, the Cavs front office turned it down, and he’s mad about it.

Now Lebron is putting public pressure on them to make something happen, and private pressure by using his own opt-out option this summer as leverage. He can leave whenever he wants, and you can bet he’s holding Cavs Gm David Griffin’s feet to the fire on that.

For now, Griffin is attempting to call Lebron’s bluff. He likely doesn’t think Lebron has it in him to leave Cleveland again, and refuses to roll over and allow Lebron to control him for the next five years. It’s a move that backfired on Pat Riley and basically ended his reign as the league’s top power broker, which I wrote about here. But that was when Lebron had the option to return home to Cleveland. Leaving now isn’t as easy for him as it was to leave Miami. It’s a power struggle that will be fascinating to watch over the next month and into the summer.

When it comes down to it, I think Lebron will get his way. Maybe Griffin goes back to the Knicks and accepts the Melo-Love trade with something else thrown in. Maybe he approaches Chicago about a trade for Wade. I don’t know. But it’s hard not to imagine Lebron winning out here.