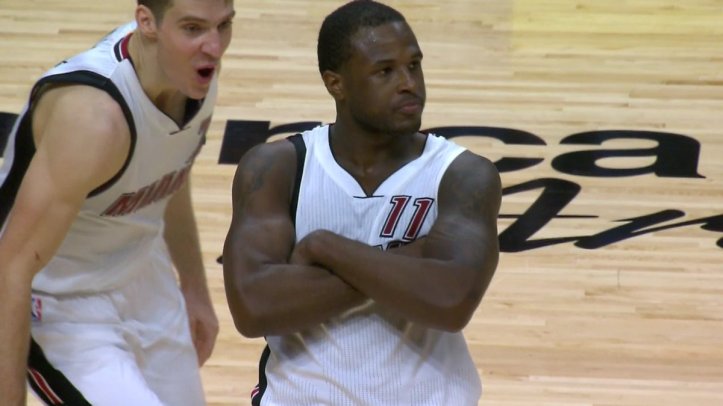 Have A Night Dion Waiters

NEON DION. Get Buckets or Die Trying baby. Load up the boat and take me back to Waiters Island. I just booked a last second AirBnB and I’m riding out the weekend.

And with that, goodnight 😎. pic.twitter.com/bPftO2AhRx

The Heat's new profile picture is a friggin A+++++ pic.twitter.com/wC9frAJTMF

Have A Night Russell Westbrook

Have A Night Terrance Jones

No Anthony Davis? No problem. Leave it up to TJ to have one of those “wait why hasn’t Terrance Jones ever reached his potential?” games. He was awesome last night, including this MONSTER block on LeBron at a crucial point in the game and some big time free throws to close it out.

Play of the Night: @TerrenceJones1's block on LeBron! #Pelicans pic.twitter.com/rfjYBqZumY

Take Of The Night

This is less of a take than it is an outright fact. Folks, if you don’t subscribe to the belief that great teams falter in party cities, I don’t know what to tell you at this point. Last night we got a double example. Absolute dregs of the NBA season. Still three weeks from All Star/having to start to care again. Lot of teams just going through the motions and trying to avoid major injury. Two absolute juggernauts, both of whom understand 1) that they can cruise until the playoffs and 2) that teams need to have fun and let loose a couple of times per year. Cleveland coming off a tough OT loss to San Antonio on Saturday night. Golden State rolling to an easy win over Orlando on Sunday early afternoon. Cleveland in New Orleans a night early. Golden State in Miami a night early.

Of course they both lost last night.

It’s not even like everyone on the Warriors was doing LIV on Sunday, die on Monday. Or that everyone on the Cavs was on Bourbon slamming shots at Pat O’Briens. Though I’m pretty confident the majority of them (Draymond and Klay, Kyrie and Shump, and of course the god himself JR Smith if he made the trip) were. It could be as simple as a team dinner that might last a few hours longer and go a few dozen bottles deeper than it would in, say, Milwaukee.

And there’s nothing wrong with that. Lord knows these dudes have earned it, and the coaches do to. Sure, these guys are adults who will ultimately make their own decisions. But you can bet Sunday night was one of about 3 or 4 instances throughout the season where Steve Kerr and Lebron James said “go ahead fellas, have a night”.

When you nu– you know what nevermind just enjoy the picture

pic of the year pic.twitter.com/RuoqgTCVi3

Washington just keeps on creeping up and up and up the standings man. 8-2 in their last 10. Now up to 5th in the East, only 2.5 back of Boston (who they play tonight) for 3rd. I’ll put my hand up here. I was wrong about the Wizards. Big of me to admit that.

Let's get to highlights from last night's 109-99 win! #WizHornets pic.twitter.com/SITh48qFJu

I think Jabari responded well to that benching, wouldn’t you say?

Big Willy style putting the work on the old pro in the post. Would be v dope if the Knicks would PLAY HIM MORE.

Hernangomez continuing to bring the energy for @nyknicks!