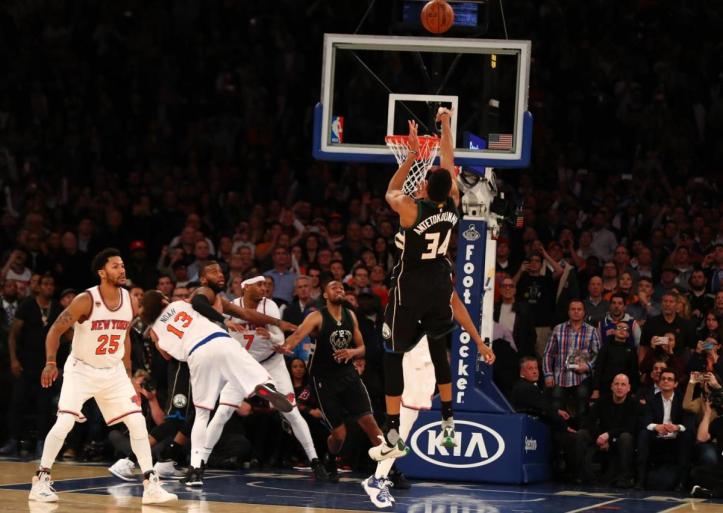 You know what’s extremely not dope?

Getting your heart ripped out in person.

Getting murdered in person <<<<< pic.twitter.com/NNSorABpe4

I’m not one who likes to film sporting events live. You’re there, you pay all this money for decent seats, you should watch it live. Get a couple of Snapchats off in the 2nd/3rd quarter, maybe one pic for the Gram, that’s it. When it comes down to crunch time, leave the camera to the side and watch what’s happening live (with Twitter open for timeouts, of course, I’m not crazy).

But I had to film that last shot. Had to.

I mean it was just such a lock that shot was going in. Absolute lead pipe take the money and run mortal lock. There was no way in the world Giannis was missing that shot. And I had to capture it live.

Watching Giannis live is something else, man. We tend to overuse this analogy, but watching Giannis is literally like watching another species on the court. He’s like the Stranger Things Monster come to life, only with longer limbs and, you know, an outrageously high basketball IQ.

I’ve seen a good majority of players live over the last two years. Freakish athletes from LeBron to Kawhi to Davis to my large adult son Kristaps. Just last month I saw Russ put on a peak athletic Russ performance in the Garden.

None of them were as impressive athletically as Giannis.

He chased down fast breaks so easily that guys wouldn’t even attempt the layup. He bully-balled his way to the hoop on thicker, stronger defenders. He glided past guards like he was outrunning children. He dunked from the goddamn elbow. Again, HE DUNKED FROM THE ELBOW. LOOK AT THIS:

And when the fourth quarter came, Giannis took over the game (shoutout Clyde). He got to the basket at will, forcing fouls and getting to the line. He wreaked havoc defensively – blocking shots, leading the break, and knocking the ball out of Derrick’s Rose’s hands to set up that game winner. And yes, he ripped our hearts out with a fadeaway so impossibly unguardable that not even our Large Latvian Adult son could have blocked it.

He ended the night with 27 – 13 – 4, plus a steal, three blocks, and about nine or ten “how in the world did he do that?” plays. And he murdered the New York Knicks right there in the middle of the Madison Square Garden floor. It was tragic, yet still magnificent to watch.

P.S.   Second biggest takeaway from watching the Bucks live is that Malcolm Brogdon is very much for real. He’s a dude who can and will play in the biggest stage. There’s always one guy in college who does everything well but nothing flashy and drops to the end of the first/second round. And from day one in the pros he

P.P.S.   Not getting to watch my large adult son play last night was a real bummer. But at least he gave us this.

Porzingis was really .8 seconds from getting sturdy on the garden and breaking the Internet pic.twitter.com/nTDa6dlJUq

Watching my one son pay tribute to my other son was… in a word… pretty goddamn special. Tigers by a million on Monday.