Yankees Trade Chapman To The Cubs For Prospects 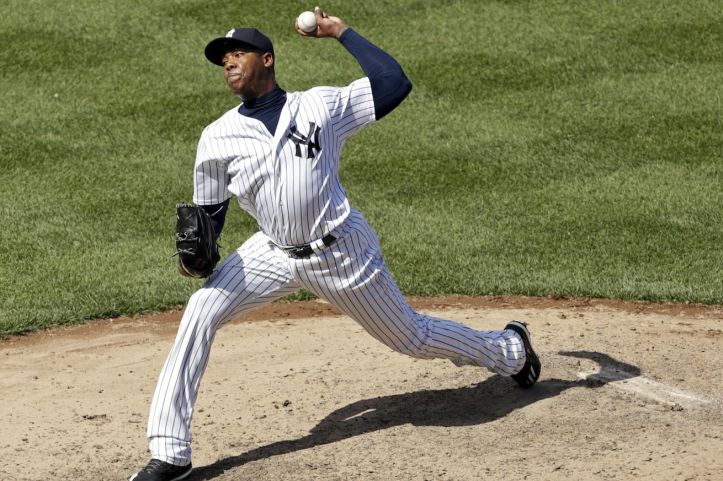 ESPN  —  The New York Yankees have agreed to a blockbuster trade that will send star closer Aroldis Chapman to the Chicago Cubs, as first reported Monday by FanRag Sports and confirmed by ESPN’s Jayson Stark.

Chicago will send a four-player package to New York that includes top shortstop prospect Gleyber Torres, according to reports. The Yankees also will receive pitcher Adam Warren, minor league outfielder Billy McKinney and an unidentified fourth player, according to FanRag Sports and Stark.

As first reported by FanRag Sports, Yankees owner Hal Steinbrenner has approved the deal. Speculation circulated Monday that one reason why the teams have not announced the trade is because the Cubs are attempting to sign Chapman, a free agent after this season, to a long-term deal.

Love it. L-O-V-E this move for the Yankees. Two awesome prospects, a fifth starter that gives them the flexibility to move Nova or Pineda, and a whoever this 4th guy ends up being, all for a guy with an expiring contract who served very little purpose for the next few months on a team that should be rebuilding.

This… this is the type of move that can kickstart a genuine rebuilding effort. You take an overvalued asset at the peak of it’s value, and you move it for young talent.

Now, that’s not to say Chapman is overrated. It’s a move that makes sense for both sides. The Cubs are positioned to go for it now while at the still time building for the future. They have the farm depth and they needed a power bullpen arm. And as long as they’re able to lock him up for an extension, it’s a smart move.

Good on Steinbrenner for letting Cashman make the right moves to build going forward. And good on Theo for having the balls to take a risk and go all in this year. Smart stuff all around.