Rick Reilly Is Just Fucking With Us, Right?

Adding Kevin Durant to a Warriors team that already had Curry + Thompson is like giving Kate Upton a 3rd breast. Nothing appealing about it. 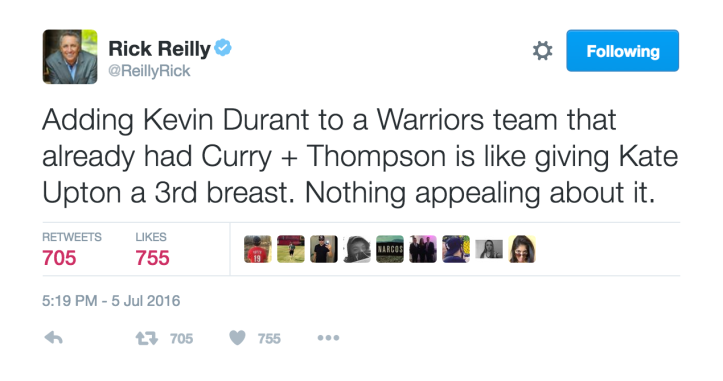 One of the most commonly agreed upon takes out there is that Rick Reilly used to be one of the best sportswriters out there. My dad, other dads, basically every white guy over the age of 28. Me? Never grabbed me. But I just assumer I was too young and didn’t appreciate his stuff or something like that. Because everyone else’s take is that Rick Reilly was the GOAT. “Must-read stuff”… “Open Sports Illustrated and go right to Reilly’s piece”… on and on and on.

But… how? Seriously… how? How in the absolute fuck was this guy one of the best writers in the country? I don’t get it… I really just can’t wrap my brain around it.

The only thing I can think here is that he’s fucking with us. He has to be, right? That’s why he always drops these tweets a day late. Like, instead of having a good, normal, thoughtful, funny, etc. tweet on the day something happens… instead of doing what everyone else does… he realizes that if he waits until the dust settles a day later and drops the worst tweet ever, he then becomes the story. Yeah he takes a beating on social media and blogs and whatnot, but what does he care? He’s not reading any of this stuff. He’s not checking his mentions. He just knows that when he drops these tweets, everyone will reminisce on how “great” of a writer he used to be. Nobody is saying he’s a bad writer now, they’re just saying he sucks at Twitter. Instead of cranking out bad columns past his prime and damaging his reputation as a writer, he can just write up the most nonsensical, thoroughly creepy tweets ever as a way to stay in the public eye. It’s not the most appealing way to remain relevant, but it’s working, right? This take makes sense, right? Right? RIGHT?