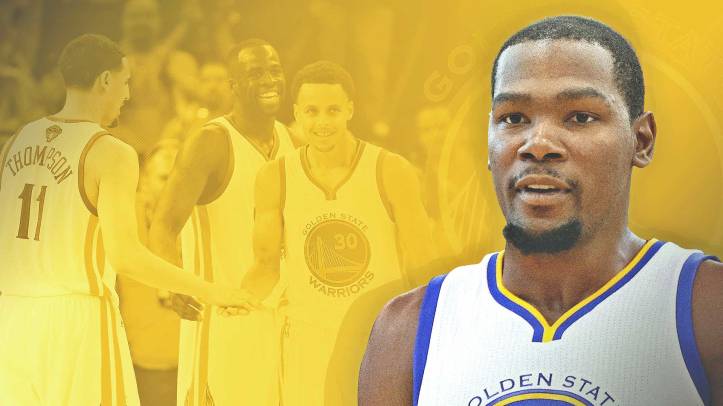 The Ringer   —   The greatest regular-season team of all time just swapped out Harrison Barnes for Kevin Freaking Durant. It’s fair to say the Warriors now have two of the three best players in the NBA, which raises this question: Is it even possible to construct a team that can go toe-to-toe with the Dubs’ Super Death Lineup? Our staff took a crack at it. So that this isn’t complete anarchy, we placed a restriction: You have to pick your five-man rotation on a $15 budget. 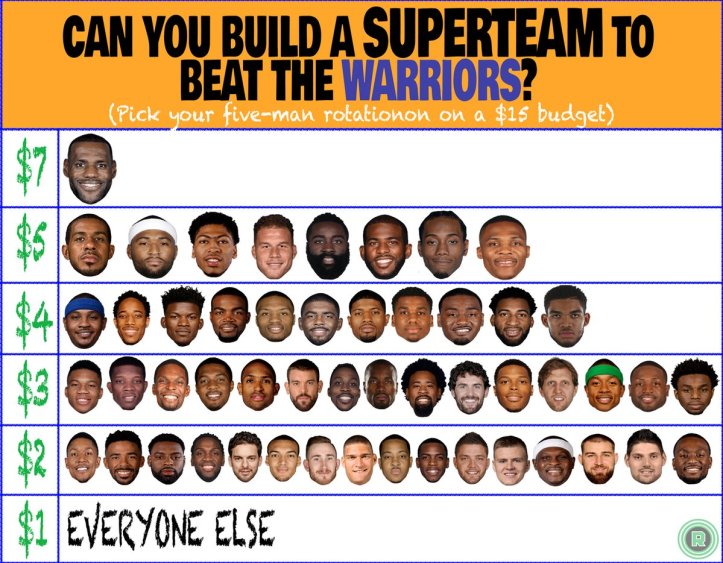 So this has been the hottest thing in the internet streets the last two days. Kevin Durant is now on the Warriors (which I’ll get to later today… big Free Agency Recap coming), and the league has basically handed the title to Warriors. The Ringer came up with this Superteam idea… a play off the “Build the best team you can for $15” idea we’ve all seen before, with the one caveat being Lebron at $7. Credit where credit is due, it’s a great idea. Everyone is throwing their lineups out on Twitter, so I figured I’d throw all mine together and see what sticks. For the record, I truly, absolutely, 100%, definitely-not-any-false bravodo-here believe all of these teams can beat the Warriors. Fight me on Twitter at @yourboyham11 if you think I’m wrong. But I’m not.

The thing is, you kind of have to just swallow the $7 for Lebron to beat this team. He’s the only one who can and has beat both the Steph Warriors and a fully-heathy Durant Thunder team. In all seriousness, a team with Lebron and 4 other guys is the only team that’s going to beat this Warriors team. There’s variations to those four, like Adams for Thompson or Dame for Kyrie. Maybe replace Kristaps with Adams and get a $5 point guard like Russ or CP3.

This lineup gives you 1) point guard in Kyrie with no fear of Steph and a clear record of outplaying him multiple times… 2) a wing in Batum who can guard all five guys on the floor, hit threes, pass at a high level, and has enough height to make things tough for Klay… 3) a big in Thompson who can switch onto Steph at any time, keep possessions alive and keep GS off the offensive glass, and has earned his entire contract with his play against this team… And of course, most importantly, a basketball unicorn in Kristaps who can defend the rim, use his height to post up the smaller guys, shoot over anyone on the perimeter, move the ball on offense, switch onto smaller guys at a respectable level, control the boards, save us from our sins, deliver us from evil, and put his big Latvian dick right in Draymond’s eye every time there’s a putback opportunity. And the fact that you’re getting $6 value for the price of $2 is a steal that you just can’t pass up.

Low-key… low-key a very balanced team. A natural point guard who can handle his own with Steph. An upper-middle-class man’s version of Klay to provide some shooting. A lower-upper-class man’s version of Durant to (hopefully) play him to a near-draw. And two athletic, versatile big men who can defend, rebound, and score with anyone in the league. Very few holes in this team. They can all defend, they can all shoot, they can all attack the basket, they can all handle the ball, they can all pass. They’ll out-rebound Golden State and they’ll rarely, if ever, have a problem switching with them defensively or running the floor. Low key… very low key might be the most rational, balanced team you can piece together that doesn’t include Lebron. And they probably have the best chance of any non-Lebron team. Well, besides this next one….

Go ahead, tell me this won’t work. Tell me Steph can guard Kristaps #5. Tell me Klay can shoot over Kristaps #2. Tell me Draymond can get a shot up on Kristaps #4. Tell me who’s blocking Kristaps #1’s shot. Go ahead, I’ll wait.

Scoring, size, rebounding, and three frontcourt players who can switch onto the perimeter on the pick and roll. Kawhi on Durant is as close to a wash as you can find besides Lebron, and those two guards are maybe the only combo that can shoot close enough to Steph and Klay’s level to even it out. Will Kryie and Dame struggle defensively? Of course. But whoever isn’t being guarded by Klay will eat Steph alive on the other end. And Adams and Thompson are juuust big enough that you can’t try to hide Steph on them defensively. I still have Golden State as a -3 favorite in this matchup, but the combination of perimeter scoring, size and rebounding, and defensive versatility gives these five a good a chance as any non-Lebron team.

Look, the only way you’re going to beat this Warriors team is if your team gets hot, right? Well how about we put together the streakiest team in the NBA. All or nothing baby, right? These five all get hot at once, you win 175-174. And if they don’t? Then fuck it, you were probably gonna lose anyway. Might as well go down swigging I mean swinging.

All I’m saying is — don’t let this team get hot.

This is probably the closest you’ll come to matching the “small ball, switch everything” ability of the Warriors defensively. You’ve got Bradley to throw on Steph, and you’ve got four very versatile wings, all capable of guarding Durant, Draymond, Klay, and Iggy. Can this team score with a hot Golden State team? Probably not. But there’s enough defense here to give them a chance if it’s close.

Bully ball all day. So you want to take and hit 40% of your threes? Okay, we’re scoring 60% of the time on the post. Slow the game down, run the clock, and beat the absolute shit out of this small ball fancy stuff for 48 minutes. And if my math is correct (I have no idea if it is), we’re winning this game if you’re under 100 possessions.

Don’t mean a thing without the ring.

Oh your new Small Forward has long arms? Cool. Compete with this Length.