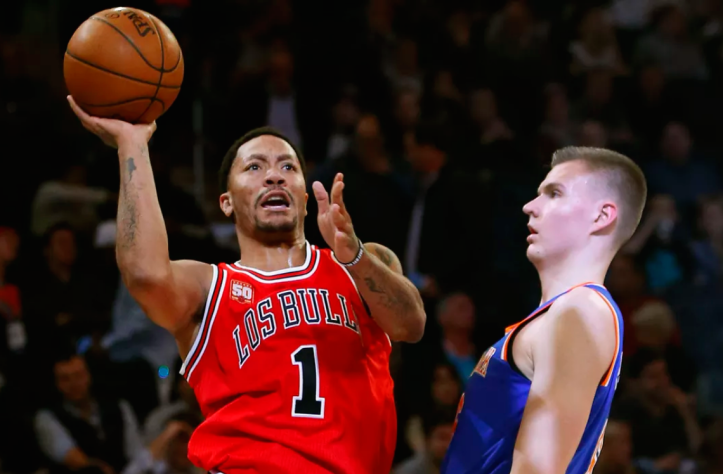 The Bulls are sending Derrick Rose, Justin Holiday and a 2017 2nd-round pick for Robin Lopez, Jerian Grant and Jose Calderon, per source.

When you really look at this trade, how much downside is there really?

Does is suck to give up Robin Lopez? Yeah. I love Robin. He’s an awesome role player. He’s got a great contract the next few years. The Lopez-KP twin towers lineup was a huge asset to get stops. And as a teammate and a character, he was awesome to watch. I’ll miss the hell out of him.

Does it suck to give up Jerian? Yeah. I love Jerian. Nobody got railroaded by this stupid ass franchise and dumb ass coaching staff harder than Jerian. Had his minutes yanked around, never had a chance to really become a point guard, was forced to play in a system that absolutely didn’t fit his game. I don’t know if he’s a point guard, even in a backup sense. But dude competed and, when given a chance to shoot, finally started to figure out his jumper towards the end of the season. And the idea of him growing as a pick-and-pop player with KP was a fun young combo the Knicks haven’t had in a while.

Does it suck to give up, Jose Calderon? Yeah. I lo– wait what the fuck am I saying. That’s great. That’s awesome. Later Jose. Don’t let the door drive right past you for another open layup on the way out.

I don’t like giving up Robin Lopez and Jerian Grant.

But you know what… it’s Robin Lopez and Jerian Grant.

We’re not talking about two franchise cornerstones here, guys. Let’s all take a step back and relax. It’s a backup Point Guard (who might not even be a Point Guard) and an average Center who can’t play in our best lineup (KP at Center). Two guys under contract for three more years in a time where we’re trying to completely revamp the roster. Both good contracts? Yes. But contracts you’re stuck with at a time when roster flexibility is paramount for the direction of the organization.

this isn’t even about Rose.

We just acquired a MASSIVE expiring contract ahead of the biggest free agency period ever, a potential top-40 pick in a potentially loaded 2017 Draft, AND were able to dump the garbage contract of a garbage player who was actively hurting our team offensively and defensively in Jose Calderon.

And what’d that cost? An average Center and a borderline rotation player who might not even have a position.

The two most important assets in the NBA are cap space (expiring contracts) and draft picks. And we just got a TON of cap space and a valuable draft pick (early 2nd round is great value) for two players on long-term deals who aren’t that important to the future of the franchise. Cap space and a top 40 pick for two long-term contracts? Objectively, that’s a smart move. And that’s a step in the right direction for this franchise.

I’ll take either scenario over “Keep Robin Lopez and Jerian Grant, maybe sneak into the playoffs, and have $15 million less in cap space next summer than what you would with this trade.”

More importantly than anything else… More important than what “giving up Lopez and Grant” means… More than what “a year with Derrick Rose” means… The most important thing is that this trade does nothing to damage the future of the franchise.

This year really does not matter. Almost any outcome this year is good, so long as Kristaps is getting better. Bad season? We have our pick. Good season? Playoff experience. Whatever happens, the most important thing is to focus on the direction of the franchise and what it’s going to become with Kristaps as the centerpiece. And when you look at the presumable goals of the New York Knicks these next few years, this trade either helps or has no impact on the four most important. Those goals?

1 – Free up cap space and give yourself roster flexibility.

$60 million. $60 million dollars of cap space next season. $60 million dollars with only three players (KP, Melo, Kyle O’Quinn) on the books. Obviously that will change with a few signings this offseason (more on this below). What matters is that 1) about $15 million extra between Lopez and Grant was freed up, and 2) there’s much greater flexibility to add players who fit with this new up tempo system and with Kristaps at Center… which leads to…

2 – Develop Kristaps Porzingis as a Center

Kristaps is a center. A perfect center for today’s NBA. He’s both tough and athletic. He can play inside and outside. He can protect the basket and switch out on smaller players when necessary. He can shoot the three and post up. He’s perfect and beautiful and I love him and wait what happened I blacked out.

Every important minute going forward is going to be with KP at the five. Shit, every minute he plays should be at the five. That can’t happen with Robin Lopez on this team. As fun as the twin-towers lineups were at times, KP shouldn’t be chasing small-ball fours around the court anymore. He’s a center. We call him a basketball unicorn for a reason, and we should take advantage of his completely unique skill set that perfectly fits today’s NBA. He’s a center, and moving Lopez (plus gaining roster flexibility) allows the Knicks to build as such.

Derrick Rose? Derrick Rose is going to be here for one season, guys. One season and then he’s gone. He’s a one-year stop gap. A rental player who will be able to run some pick and roll with KP, probably get hurt, and then move on to Sacramento or New Jersey or anywhere else by this time next June.

If Derrick Rose sucks this year/gets hurt… okay, we get a higher draft pick to draft a point guard next June. A team with injured/bad Rose, no Lopez, and no Grant is a worse team than one with Lopez and Grant but no Rose. That means a better draft pick. That’s beneficial.

If Derrick Rose is good, and can help Kristaps develop, and can help Melo move into a secondary/more catch-and-shoot roll… that’s great. Kristaps development makes this an ideal destination for a free agency class of point guards with names like Westbrook, Paul, and Lowry. You get an all-world big man to run pick-and-roll AND bail you out defensively. You get handed the reigns of a fast-paced, high stats offense under Hornacek. You get a later-career Melo who understands how to fit into a secondary/tertiary role. And you get New York.

Again, I’ll take both scenarios — higher ceiling and lower basement — over where we were with Lopez and Grant.

4 – Surround KP (and presumably Melo) with wings who can shoot threes and defend on the perimeter.

Jerian Grant and Robin Lopez? Nice roll players. Can’t shoot. You open up cap space = you have a better chance of landing a better wing player who fits next to KP & Melo. Neither of those players made this a better shooting team.

As far a defense goes, this clearly hurts for right now. (Though when you consider Calderon was going to be the point guard again, Rose is a MAJOR upgrade) You lose two solid defenders and get a bad one back in Rose.

But again, it’s one year. And in a conference with Lebron, Paul George, Jimmy Butler, Dwyane Wade, Demar Derozan, etc. here for the long term, you can very easily argue that it’s significantly more important to use that $15 million on a perimeter defender than it is to pay a center. Especially when you already have a 7’3″ basketball unicorn hybrid of Hakeem Olajuwon, Dirk Nowitzki, Kevin Durant and Jesus Christ to protect the rim.

So now that we know there’s a guaranteed $21 million coming off the books next year, enough for at least one max contract, and a guaranteed vacancy at the point guard position, that suddenly opens the team up to spend (smartly) this offseason. Splurge for a versatile stud inNic Batum? Maybe overpay a little for a solid guy in Marvin Williams? Give Luol Deng a short term deal to bring some stability and leadership? These are all a little more realistic a practical now knowing that the money will be there for a max point guard next summer. And I’ll take any of those three in my crunch time frontcourt with Melo and KP for the next two years over Robin Lopez.

Those are four things the Knicks should (and hopefully will) focus on going forward. And this trade hurts none of those things. It helps, or means nothing to it. And that’s the most important thing for the future of the franchise.

Do I want Derrick Rose on my team? Not necessarily. Do I want to give up Jerian and Robin? Not necessarily. But I’m willing to accept both moves when they are clearly beneficial to the long term goals of this franchise and how we build around Kristaps Porzingis.

And yes of course if we sign Dwight Howard none of what I wrote means anything and I’ll commit seppuku outside of Madison Square Garden.