And The Most Aggressive Tweet Of Last Night’s Game 6 Goes To… Denny’s Diner? 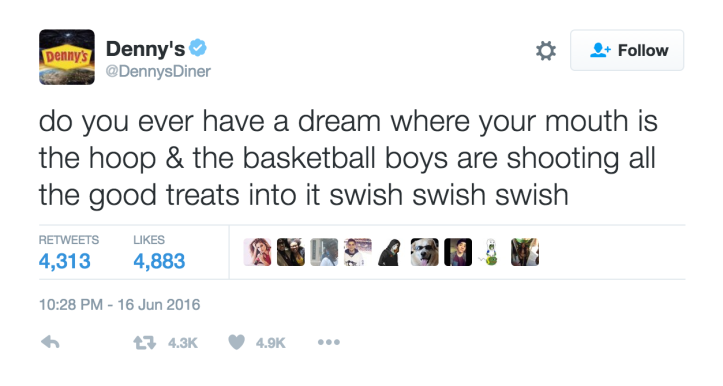 There’s so many levels of absurdity to this tweet I don’t even know where to start.

Like, who’s running this account? Is this some 22-year-old Denny’s Corporate intern trying to write something ridiculous for publicity? Or is it an old southern white lady who doesn’t grasp the double entendre of the scenario she laid out? And whoever it was… are they the first ever person to use the term “basketball boys”? Like yeah, those guys shooting the orange ball into the cylinder over there… they’re the basketball boys. Last nights game? Great job from all the basketball boys out there. You know who’s very tall? The basketball boys.

Also, who’s just sitting there daydreaming of people throwing treats into their mouth? I mean, don’t get me wrong, I’m not judging. I’ll still forego eating like a normal, well-adjusted adult for the sake of tossing treats up and catching them. With any given bag of candy I’ll throw no less than 80% of them up and catch it in my mouth. And you know your boy catches it every. single. time. #athleticasfuck

But who’s out there daydreaming about this? Who’s sitting at a table in Denny’s with their grandparents on Sunday morning (the only presumable scenario you’re at a Denny’s) and thinking, “you know what would be great now, someone tossing Denny’s flapjack floaters into my mouth from across the room. Someone throwing hash browns hook shot from across the table down my gullet. Someone shooting a three pointer at my face from behind the counter. That would be sweet.”

And finally, who thought this tweet would make sense. Like yeah… people will definitely relate to this. Market research shows that people watching basketball are, in fact, daydreaming about catching shit in their mouth. People do–as our research shows–equate basketball with sexualized dairy fantasy. This is

Just a wild tweet all around. Even amongst the Ayesha Curry meltdown and the Lebron-Steph dad memes* and the general insanity of NBA Finals Twitter (which is hands down the best Twitter in the game right now. I stayed up for like four hours after that game and never stopped laughing at everything)… even with all that going on… this tweet from Denny’s Diner still stood out as the most absurd. What a night.

Shoot your shot Denny’s… shoot your shot just like those basketball boys shoot treats into your mouth, or something like that… whatever.