That Dinosaur-Sized Gator From Yesterday Is Why The NBA Center Is A Dying Position… My Column: 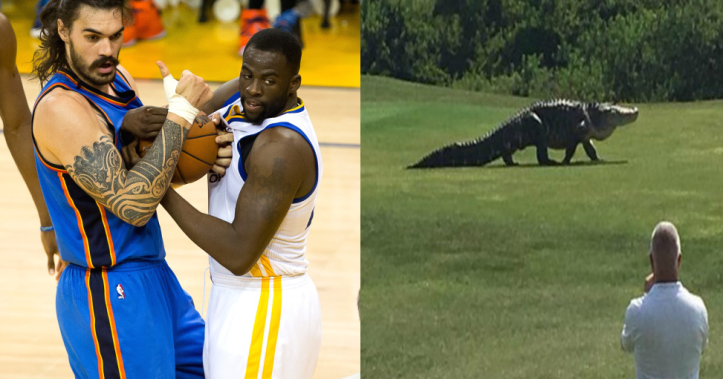 A massive alligator strolls a golf course. 👀 (via @lindsaybrookesc)

Dinosaur? More like Imma soar right past this 6.9 forty time alligator in his cement ass toe-shoes. (Venmo is in the Twitter bio, send any amount you feel is fair).

If I’ve said it once I’ve said it a thousand times… the bigger the animal, the more confident I am that I’m gonna live. I know it’s Florida and they don’t count as real people there, but there’s a reason that guy was able to stand a foot away to take that video. Big, slow animals do nothing for me. You reach a certain point where you’re just too big for your body to function and I’d say this fifty foot long, eighty ton gator is probably at that point. Shit, even if you can pick up speed like a bear I can still hit you with the filthy hezzy and side step your ass into the ground. The only big animal I couldn’t outrun is a Gorilla. Gorillas are the undersized power forward of the animal kingdom. Freak athletes. I mean did you see Harambe? Dude got up the court like Draymond on the fast break. Guards all five positions, high basketball IQ, the picture of the modern NBA. Except he’s dead. #RIP

But this gator? I’ll run that gators ass up and down the course like a track meet. I’ll cross his ass from the first tee to the 15th hole, which of course is where I inevitably collapse and lose four balls in five shots and blame the sun and walk off before reaching the green and say “I’ll just take an eight here, let’s keep it moving” and okay we’re getting off track here…

The point is, big animals ain’t shit. You know why dinosaurs went extinct? Same reason Draymond Green is an NBA center and Deone Bucannon is an NFL linebacker. Big and slow can’t cut it no more. The game has evolved. Oh I can’t get up a shot in the paint? Okay, come guard me on the perimeter, big man. 3 is more than 2, and I’ll run you up the court and Hack-a-Shaq you in the post all day long until you’re can hit more than 60% of those free throws. You’ll be riding more 4th quarter pine than Steven Adams on Monday. Can’t kill what you can’t catch, right?

This gator and his slow-motion hackneygate are the reason the crunch time bigs tomorrow will be Draymond and Iggy and Tristan Thompson and Lebron. It’s the reason no team built around a center has won since Shaq. It’s a guard-and-wing-dominated league, and it’s a human-dominated planet. And unless the alligator can develop a Kristaps Porzingis-esque jumper or Karl Towns-esque handles, he’ll be just another Jahlil Okafor, sitting fourth quarters on his way to extinction. But don’t worry Philly. You know who else trusted the process? God.

P.S.   When you see girl looking thicc af across the club but still plotting your lines tho.