Should Draymond Get Suspended For Kicking Steven Adams In The Dick? 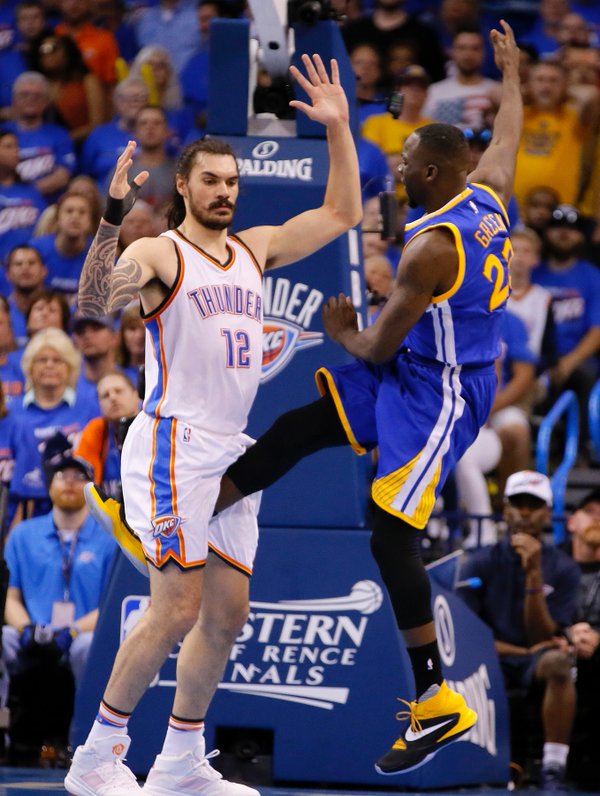 Does Draymond deserve a suspension?

Does Draymond deserve a suspension? Personally I’m gonna air of the side of “no” here.

It’s the Playoffs. In my mind, you have to do something fucking egregious to earn a suspension. And I don’t see what Draymond did as that egregious.

It comes down to the “hurt or injured” thing. Are you hurt, or are you injured? If you’re injured, okay, come get medical attention. Injuries are diagnosed. Injuries take time to heal. Injuries actually prevent you from performing. If you’re hurt? Suck it up and get back in the game.

The same logic applies to a situation like this.

Did Draymond try to injure Steven Adams? Or did he just try to hurt him?

A kick to the dick – that’s the latter

Look, I felt that pain as much as anyone. I was right there with Steven. Every guy was. Those few minutes after getting hit are some of the worst moments in human existence. You’re gasping for air, the pain won’t settle, it’s the worst. It’s the one spot on your body that you can’t really squeeze to kill the pain. The one spot you just have to let the pain die down. It sucks.

But you know what? That pain always dies down. Nobody is declared out for the game with a sore dick and tender balls. That’s not an injury. That’s just a hurt… a hurt area… a hurting… whatever, you know what I mean.

Was it a shitty move by Draymond? Yes. Is Draymond for the boys? Clearly not. But do you get suspended for punching someone in the– okay, bad example. Do you get suspended for elbowing someon– okay, also a bad example. You know what, let’s just forget the examples. The point is, Steven Adams was back in that game shooting free throws by the time the replay was done. Hurt, not injured, you see? And when you think about it, couldn’t I argue that Draymond was simply flailing his leg to sell the call, and just happened to unintentionally connect with Adams’ dick? Makes you think, huh?

So at the end of the day, yes, it was a scumbag move. But I don’t see this…

as warranting a sus— aaahhhhh fuck it, I can’t fake it anymore. He’s gonna get a game and he probably should. That’s totally intentional. And honestly it’s probably worse than throwing an elbow.

Welp, barring a superhuman effort from Steph AND Klay–which, to be fair, is always on the table–the Thunder will probably be up 3-1 going back to Golden State. Fucking Draymond probably just ruined what had the potential to be one of the best seven game series of all time.

P.S.   How about Adams eating that kick, huh? I’ve never seen someone so casual about a full-fledged shot to the dick. I don’t know if that’s just the New Zealand in him or a comfortability with getting repeatedly kicked in the dick or what, but dude walked away like he’s barely been touched. What a savage.