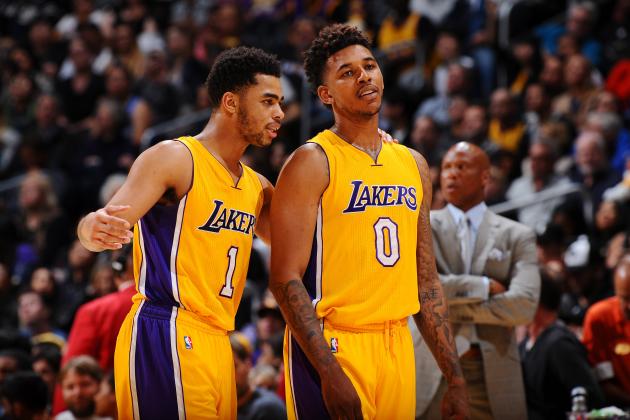 You know what my favorite part about this story is? It’s that Swaggy P taking home some USC sophomore isn’t even a story here. It’s just so widely accepted that every NBA player is sleeping with multiple women at all times that we all just glance over that whole part.

NBA star Nick Young Caught on Video Admitting To Cheating On Iggy With A 19-Year-Old Girl After The Club! pic.twitter.com/9ny9tDG0Mb

USA Today  —  “Right now, they’re handling it by isolating him,” an unnamed member of the Lakers organization told ESPN in a story published late Tuesday night. Russell sat by himself at a recent team breakfast meeting, according to ESPN. On another occasion, Russell entered the locker room and sat next to guard Lou Williams, who got up and walked away. The Los Angeles Times reported that Russell’s Lakers’ teammates are “ticked off” that the video was made public. Young doesn’t appear to know he was being taped.

“You was 30 and she was 19?” Russell asked Young, 30, in reference to a woman he met at a club.
“What about Amber Rose?” Russell said, referencing another celebrity.
“No, she knows my girl,” Young responded. Later in the video, Russell said, “I’m glad you told my video all that.”

“D’Angelo is sometimes 20 going on 14,” a person familiar with the situation told The Los Angeles Times. “They’ve all been trying to prank each other this season. This was a stupid prank.” The newspaper reported that the Lakers have no plans to punish Russell.

You know what my favorite part about this story is? It’s that Swaggy P taking home some USC sophomore isn’t even a story here. It’s just so widely accepted that every NBA player is sleeping with multiple women at a time that we all just glance over that whole part.

I haven’t heard one single person actually discuss the whole “Swaggy P is cheating on Iggy” aspect other than that it’s the thing that was snitched about. Nobody actually cares that Swaggy P cheated, they only care that D’Angelo ratted him out.

Think about that… He’s engaged and is openly cheating on his fiance all the time, and literally not a single person cares. Not even Iggy. Because while she did send out this tweet…

hmmm i see D Angelo Russell is trending… I actually liked his film. Thanks bro.

…not even Iggy Azalea is naive enough to enter a relationship with an NBA player (let alone a guy who calls himself Swaggy P) and assume faithfulness. You don’t walk outside in the rain and act surprised when you get wet, do you? Then you can’t enter a relationship with a Lakers player who strictly refers to himself as Swaggy P and act surprised when he’s taking home coeds to fuck in the full sized house he built for his sneaker collection in the backyard.

That’s just the culture of the NBA. It’s weird and it’s preposterous and it’s absolutely hilarious. Just last week I read a John Wall quote that said he “couldn’t settle down at this point because he knew that he couldn’t be faithful”. He literally said that he knew that he couldn’t be faithful. And everyone read that and basically just thought, “yeah, that’s a good point.”

I’m not saying that a bad thing. It’s not. I would absolutely not settle down if I was in the NBA. Anyone in John Wall’s shoes would have girls in different cities, and anyone who says they wouldn’t is either a liar or a sanctimonious douche. I just get a kick out of the NBA (and other sports to a much lesser extent) being the only profession where it’s just openly accepted that the idea of not cheating on someone is completely out of the question. What a life, man. What a life.

P.S.   I also got a kick out of this scorching hot take from Dan Wolken:

This D'Angelo Russell story highlights the biggest downside to 1-and-done: Putting teenagers in the workplace with grown men.

This D'Angelo Russell story highlights the biggest downside to 1-and-done: Putting teenagers in the workplace with grown men.

Good point there Dan. How dare the NBA allow teenagers into the workplace with professional grown men who also happen to refer to themselves as Swaggy P and own side houses for their shoe collection.

P.P.S.   I actually don’t necessarily disagree with what Wolken is saying, it’s just hilarious that he chose a story with a 30-year-old who calls himself Swaggy P as his example of “grown men in the workplace”.

To be fair though, he does have a point. Sure, there are the exceptions like my best friend Kristaps, who already handles the media like Tim Duncan. But I’m starting to really lean towards keeping these kids in college (while getting paid) for two or even three years. Not just from a basketball standpoint, but from a “get some semblance of structure for a year or two, and not just three months” standpoint. The rookie wall doesn’t just happen on the court. But that’s all for another, longer blog.

If you told me that he accidentally posted this to social media, I would absolutely believe it. That dude might legitimately have the IQ of a fourth grader. Sure the kid can hoop, but I would by no means be shocked to hear that he has the mental capacity of a nine year old. He’s that friend you have who would text a dick pic to the wrong person or tweet a DM. Just kind of aimlessly wandering through life with this one savant-like talent to carry him.

Yeah it’s a snake move to record Swaggy P there, but I think it was more that Russell is an idiot with the brain of a child and less that he’s a snitch.