Yale’s Makai Mason Declares For The NBA Draft… Wait, What? 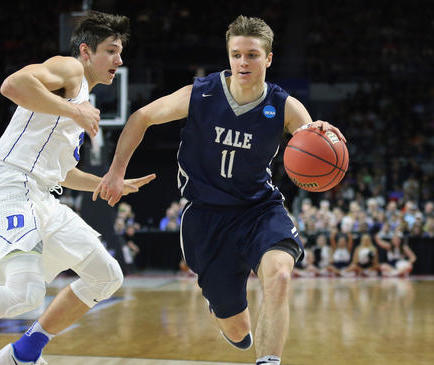 Makai Mason’s scouting report will make John Stockton’s draft card look like Shawn Kemp’s. That thing will be a Bingo card of white stereotypes. Teams might just write their player evaluation of Makai Mason on an actual blue collar

Yale guard Makai Mason is hooping out there https://t.co/yQXNQ74s5Y

First of all, outrageous declaration here. Yeah this kid can hoop, and those games were impressive, but if this kid is declaring for the draft I might as well put my name out there too.

Hey NBA, I’m also an undersized white kid who gave a pretty good performance to win a sloppy, disjointed basketball game last week. I have no right stepping on an NBA court, but my name is out there too, in case you’re interested in shaking things up. In the interest of full disclosure, I should probably let you know that I’m relatively out of shape. But what I lack in conditioning I make up for in great footwork and constantly fouling people who beat me off the dribble. Put me in in the K.J. McDaniels “foul Andre Drummond 5 times in 9 seconds role” and let me sit on your bench as a chemistry guy. Nobody outside of the New York Knicks plays all 13 players at once. Why not fill that role with a solid locker room presence like me? All I’m saying is think about it. If Makai qualifies for the draft, there’s no reason I can’t either.

But, my draft aspirations aside, you know what the real story here is?

Makai Mason’s scouting report will make John Stockton’s draft card look like Shawn Kemp’s. That thing will be a Bingo card of white stereotypes. More grit than a Danny Woodhead screen pass. More heart than a Dustin Pedroia at bat. And more sneaky and deceptive physical traits than you can fill a lunch pail with. There has never been player to play the game more the right way, and there has never been a player that fans would more like to date their daughter. Teams might just write their player evaluation of Makai Mason on an actual blue collar in order to be as efficient as possible. And this is all without mentioning that he might be the first professional athlete who’s IQ is mentioned above his height and weight at the combine. He went to Yale, after all. Yale, pretty good school, every heard of it?

In all my years of reading Draft profiles, I’ve never looked more forward to one as much as this. And I’ll be sure to post it the second it’s up. Just trying to out-hustle all the other blogs out here. Not asking for any attention.