What a moment for the big man last night, huh? It’s as if all the weight of the last four years came crashing down on his head right before our eyes.

I’m not what you’d call “politically educated”. I follow politics in the same way that I follow reality TV. And if we’re being honest, I probably watch reality TV more intensely. I’m about to write an in-depth blog about The Bachelor. By the way, congrats on the sex, Ben.

But at least from my view, it still blows my mind that Christie isn’t the Republican nominee. When you look at the whole field, there’s really no rational reason that he shouldn’t be the nominee. He’s not a robot, he’s not a lifelong doctor with a weird voice, he’s not a con artist reality TV star, and he did not kill 20 to 28 people in the Northern California area in the early 1970’s while sending cryptic letters to the newspaper that Jake Gyllenhal worked for. And when you look at the reasons why he’s failed, it can pretty much be boiled down to 1) a bridge traffic jam created by one of his employees 2) a hug with the seated president after a hurricane destroyed his state 3) weighing 700 pounds 4) this absolutely outrageous picture of his fupa: 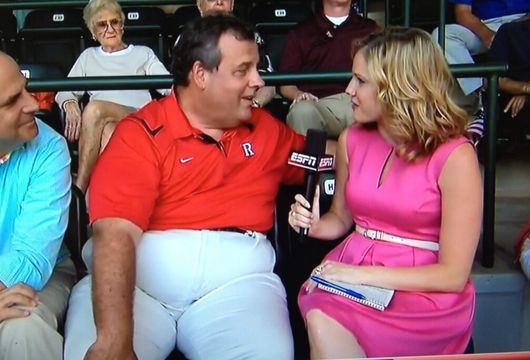 Sure, there are probably policy issues that I don’t understand that weigh into it. But we are talking about an election being dominated by a sentient tangerine who’s most in-depth stance is “We’re gonna win so much you’ll be sick of winning”. At this point, it’s tough to imagine Chris Christie’s policy stances have hurt him more than just being “the fat man who hugged Obama and closed the bridge”.

And that’s all led to this. In about a four year span, Chris Christie has gone from “the likely Republican nominee who probably would’ve won the 2012 election”  to “the fat man who hugged Obama and closed the bridge and killed any chance of getting the Republican nomination so he sold his soul and hitched his wagon to a con artist reality TV star with the feint hopes of becoming a Matador* Vice President if that con artist reality TV star somehow becomes the leader of the free world.”

And right before our eyes, the reality of that drop-off hit Chris Christie like a ton of bricks. All to the tune of Bernie Sand– I mean Larry David’s theme music. What a moment.

I’ve made a huge mistake. pic.twitter.com/Uz783Yl5jt