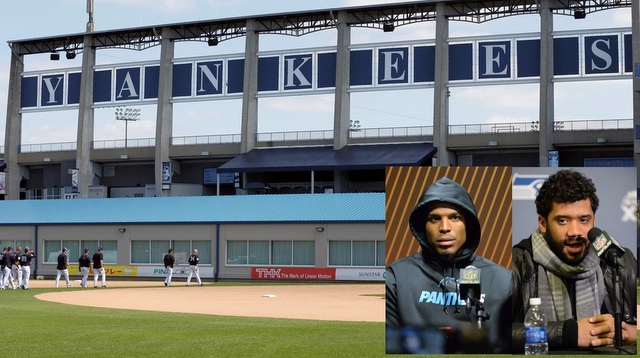 CBS Sports  —  During the Yankees’ media training, the Super Bowl is being used to portray the right and wrong way to act. Part of a video shown to pitchers and catchers compares how Cam Newton handled his Super Bowl loss to the way Russell Wilson dealt with his defeat the previous year.

This is sports. It’s not supposed to be fun. It’s not supposed to get you too high or too low. Everyone knows sports is about being a professional and handling everything like a robot so as not to offend any stuffy old white men who might feel uncomfortable at the sight of a black athlete showing some personality. You’re supposed to get in there and answer seventeen different variations of “how does it feel to lose the biggest game of your life” with bullshit canned answers because that’s what professionals do. Remember, you don’t play for you. You don’t play for your teammates. You don’t play for your fans. You play for the aging sports journalists and angry old white guys who only want to see you for your physical talent, never the personality that might come with it.

After all, who would ever want to watch a team with a personality like the 2015-16 Carolina Panthers? I bet those fans wish they could’ve traded off Cam’s countless highs and one single low against the best defense in the last 15 years for an level-headed guy like Matt Ryan. Sure he probably would’ve thrown between 19 to 27 backbreaking interceptions and never led the team to the playoffs, but he would’ve given everyone a real swell, totally professional end-of-season press conference for everyone to hang their hat on. Sure the highs aren’t nearly as fun, but the lows aren’t nearly as bad with a pro’s pro in there to give those canned bullshit press conference answers that everyone only decided to care so much about once Cam didn’t answer them.

Really looking forward to an awesome season of cheering for another boring, robotic Yankee team that suppresses any signs of fun and personality from their players while slowly plodding along to an 80-82 record and a slew of totally professional end-of-season press conferences to show how classy the organization is. Maybe we can trade a few prospects mid-season and get older and more boring along the way. I’d like to watch my sports teams with as little emotional attachment as possible – that’s the key to success.