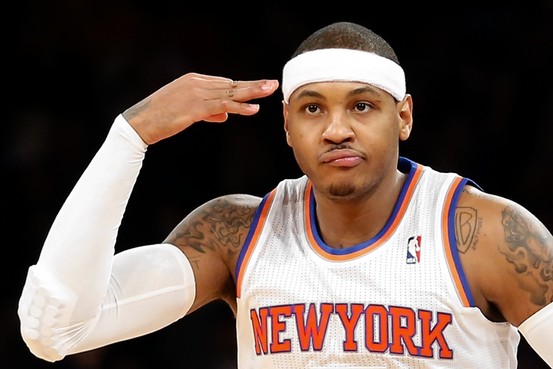 Happy Trade Deadline Day everyone. Where the Knicks will do absolutely nothing because we have no trade pieces or draft picks to look forward to because James Dolan is the antichrist.

The one trade we could have looked forward to… the Carmelo trade that should happen… won’t happen. Melo has a no trade clause, and he’s not waiving it. He loves New York too much. He doesn’t want to go to LA or Miami or Cleveland or any of these second rate cities, even if it means a title. He loves New York. He loves being a Knick and all that comes with it. He genuinely loves playing with and mentoring Kristaps. He wants to play out his whole career and post-basketball business life here. And for all your thoughts on Melo and iso ball and no defense and so on, you can’t deny what an impact he’s had on KP’s development.

What I will deny though, is how much Carmelo really loves New York.

He’d waive that no-trade clause to allow for that New York-Cleveland-Boston trade that sends him to Cleveland, Love to Boston, and those Brooklyn and Dallas picks right here to New York. And after we draft Simmons or Ingram to team with Kristaps… and Melo plays out the ’17 and ’18 seasons in Cleveland… and probably loses the title to Golden State every season… Carmelo can opt right out of that contract in the summer of ’18 to come back home to New York on a cushy, Kobe-esque legacy contract to play out his career in New York with KP and Simmons/Ingram in that Team USA 3rd fiddle role he fills so well. And finally gets that title when we end the Warriors title streak at 4.

That’s what I would do if I really loved New York as much as Carmelo says he does. But maybe I just love this city more.

Ball is in your court Melo. #StayMe7o