I Respect The Hell Out Of Bernie Sanders’ Hoop Game 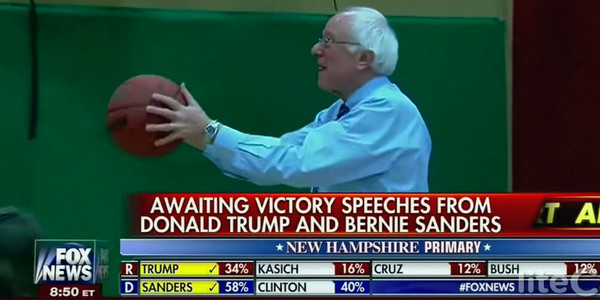 While voters await victory speeches at the #NHPrimary, @SenSanders plays basketball with his sons and grandkids.https://t.co/A96I00Gl1J

Watch Bernie Sanders shoot some hoops with his grandkids while he waited for #NHPrimary polls to close.https://t.co/qAN3NaNOjg

Look at this guy going off glass like a young Tim Duncan who might actually be younger than the current-day Tim Duncan. I respect the shit out of a guy with that kind of J. You have a jumper, you can play forever. That jumper never goes away, even when your bone density does. There’s a reason Larry Bird can still stroll out on the practice floor in Indiana and beat any player on the team at HORSE. Shooters can always shoot. Even when you lose that first step, you can always get buckets.

Barry O? No jumper. Total slash-and-kick guy. The second he lost that step, this started happening.

P.S.   I’m not even joking – I need to see athleticism out of my President. At the very least you need to be able to throw a baseball. Obama gets a pass because he’s… well he gets a pass because he could hoop. Bernie is from Brooklyn and can no doubt still throw some junk. Rubio played football so he has an arm. Trump can no doubt sling it. And Christie has some quality fat man athleticism and at the very least looks spectacular* in a baseball uniform.

On the flip side, there is absolutely zero chance this slimy little rat has ever played a sport in his life: Ted Cruz is the guy at your Super Bowl party who will ask “Whoa, when did Peyton Manning go to the Broncos?” before talking your ear off all game about literally anything other than football. Fuck Ted Cruz.

*this picture will never not be funny