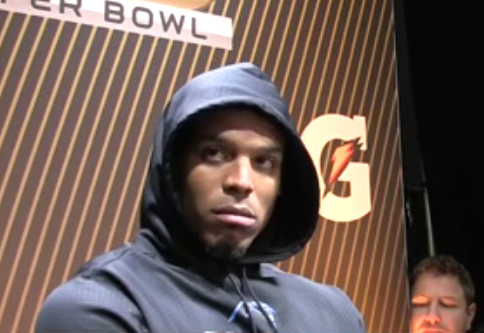 People are mad and offended because Cam Newton didn’t give fake, canned answers to the stupid, borderline unanswerable questions (that mean absolutely nothing) after he lost the Super Bowl because that wasn’t the “classy” thing to do. Give me a fucking break.

"I don’t know what you want me to say, I’m sorry." – A dejected Cam Newton walks off the podium abruptly. #SB50

I just need to get a real, truthful response from people on this… what do you want there? What exactly do you want from Cam in that situation? What is the response that will make you happy?

Really… What do you want? Just let me know. Because the only truthful answer here is that you wanted Cam to go through the motions and give a canned media answer to every question. You wanted him to “handle it like a pro”. If he did that, nobody would be complaining about this press conference. That’s not a guess. That’s a fact.

So let’s step back and think about that…

People are mad at Cam Newton because he did not give fake, canned answers to such journalistically impressive questions like “can you put this loss into words?” and “do we in the media sometimes forget that defenses can still take apart outstanding offenses?” and “obviously you’re disappointed, you’ve won tremendous games before, and I know you’ve had some tough losses too, I mean, just on the biggest stage, this is difficult, huh?” after he just LOST THE FUCKING SUPER BOWL.

This pic won't go around but we know how it is… pic.twitter.com/I8wRWsUVzm

Nope. You’re mad and offended that Cam reacted like a human being – angry that he lost the biggest game of his life, deflated from all the work he had put in this season, irritated that he has to sit there and answer the stupidest questions ever after losing the goddamn Super Bowl – instead of rattling off some stupid response about playing hard and having a great season.

Get the fuck out of my face. Get the absolute fuck out of my face. If you care about this press conference you’re a loser. This isn’t about “people caring too much about sports” or “the relationship between athletes and the media” or even about race, as much as it could be with everything about Cam. This is just about you being a huge fucking loser who felt some type of way about a guy’s reaction to the worst moment of his life, and this self-righteous, bullshit idea in your head of how someone should handle that situation.

A player who plays with emotion was emotional after a loss. A human being showed completely justifiable human emotions after the worst moment of his professional career. He didn’t lash out. He didn’t point the finger. He didn’t lose his shit. He didn’t refuse to congratulate his opponent. He didn’t play the blame game. He was angry and deflated and irritated so he chose not to give insincere, fake answers to stupid, borderline unanswerable questions from the media that mean absolutely nothing.

P.S.    I love the “nobody is bashing Cam Newton, that’s all exaggerated by the media” people from before the Super Bowl who proceeded to bash Cam the second that he lost. You guys are the real heroes.