Apparently T-Rex’s Were Slower Than Humans 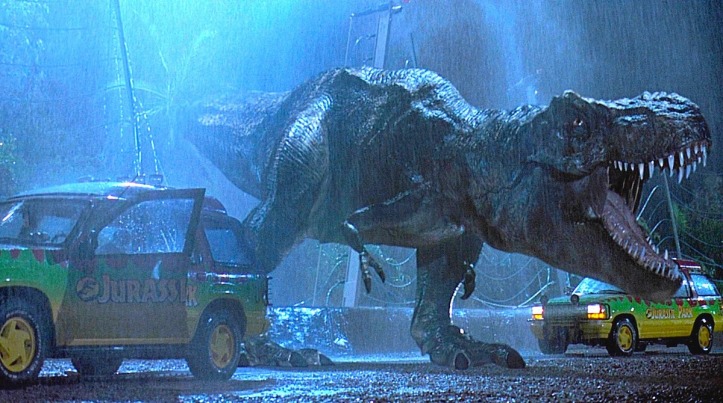 I’ve always said, I’ll fight a large animal before a small one any day of the week. Shiftiness beats size every single time. And no big dumb lumbering T-Rex is ever going to catch me. EVER.

Sciencemag.org  —  A rare set of tyrannosaur footprints is giving researchers insight into the walking speed of the prehistoric beasts, and it’s possible that humans might have been able to outrun them. According to the new estimate, Tyrannosaurus rex may have ambled as quickly as 8 kilometers per hour (5 miles per hour), slower than a plodding amateur marathon runner or even a middle-aged power walker.

Listen, I’m not gonna be so bold as to say a T-Rex couldn’t kill me if he caught me sitting on the toilet with my pants around my ankles like the lawyer in Jurassic Park.

In that scenario, I’m probably dead. I’ll admit that.

But in pretty much any other scenario, I’m gone. Some big dumb lumbering T-Rex is gonna catch me? Please. I’ll be ’97 Barry Sanders on his ass. Dodge, duck, dip, dive, and dodge. I could be a football field away before he took his first step, but I’d probably stick around and fuck with little nub-arms because I know he’d never get me.

Listen, I’ve said this for years now. I’ll fight a large animal before a small one any day of the week. Shiftiness beats size every single time. That’s just a fact. And any animal that I’m shiftier than is not gonna kill me. Anything around my size or smaller? I’m probably done. Small predators are too shifty. I don’t fuck with that. Wolf? Dead*. Hyena? Dead. Monkey? Dead.

But a bear? Alive. I know this sounds crazy, but I’m surviving. I watched the Revenant on Sunday. Great movie, all the Oscars for Leo, yada yada. But I have no doubt in my mind that I’d sidestep that bear and pop one in his ear before he could even turn around. He’s too big. There’s just too much animal there. Sure he might catch me with a claw once or twice. But I’ll stick and move like Ali out there. I’d be too much to handle. And after like 10 minutes of dodging his ever move, the bear would probably just shake my hand and move on with his day.

So to bring it back… big animals don’t scare me. I ain’t scared of T-Rex Ryan over here. All bark, no bite. Sure T-Rex might have the size advantage, but I have a brain. And I have deceptive fat guy quickness. And I have arms that are symmetrical to my body. And you know what else I have… I have the ability to move faster than “a middle-aged power walker”.

T-Rex = most overrated predator in human history. Raptors all day every way.

* Does anyone else ever think about how they’d fight off a wolf when they’re out walking their dog late at night? After thinking about it so much I’ve basically convinced myself I could probably do it. I couldn’t kill it because it’s still a dog at heart and I couldn’t bring myself to kill a dog, but I’d fight it off. I’d basically pretend like I’m running away and get it to chase me. Then when the wolf launches at me I’d turn and catch it with a vicious kick to the jaw, then step on one of its legs until I broke it so he couldn’t chase me. The only problem is that my dog is so For The Boys he’d probably just try to fight the wolf himself. I guess that’s the problem with having such an awesomely heroic dog.

P.S.   What was with the T-Rex’s in King Kong? Was there any explanation for that? I mean don’t get me wrong, that fight scene was fucking sweet. And yeah, I get you have to suspend belief when you’re watching a movie that tries to portray Adrian Brody as the hero and Coach Taylor as some sort of coward, because we all know neither of those would ever be true in a million years. But the T-Rex’s just kind of came out of nowhere. This is an island of Giants Apes and Giant Spiders and Giant Bugs and shit, and then 3 dinosaurs just kind of pop up out of nowhere to simultaneously fight this giant Gorilla.

Oh and by the way King Kong wiped the floor with all three of them. T-Rex = soft