How Much Do You Think Pat Riley Pays Ken Mauer Per Game?

(Look at those black, soulless eyes) 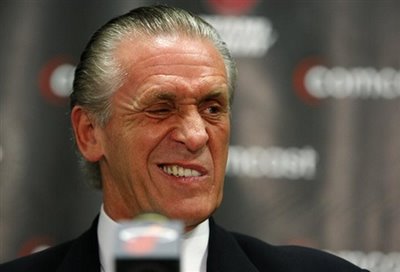 Look, Miami won that game. They won it fair and square. Kicked our teeth in thanks to Derek Fisher’s continued incompetence. Because, hey, why stick with the ten man lineup that has won four straight games Derek? Why miss an opportunity to throw Vujacic and O’Quinn back in the mix with Amundson and Williams to let their lead balloon to an unreachable deficit? Why play even TWO of your nine best players at once when you can trot out those four guys to play with Galloway and miss every shot they take? But hey, the beard looks great,  Derek! Just keep standing there with that dead expression on your face all game. I’m sure Sasha will start hitting those shots eventually, right?

If Pat Riley isn’t placing a seven figure payment in a safety deposit box for Kenny Mauer every year, I will eat my eat my own dick. This greased up motherfucker couldn’t be more on the take for Miami if he escorted Wade down the lane like a fucking valet. I mean holy fucking christ Kenny, at least pretend you’re not on the payroll. Just give Dwyane a makeup call like Billy Kennedy and the rest of Riley’s henchmen. Because if you’re so incompetent that you’re going to start missing the calls you’re paid by Riley to make and have to pull this shit, the gig is gonna be up pretty soon. The Tim Donaghy scandal wasn’t that long ago, Ken. People are still suspicious. And they might start catching on when Dwyane has to lecture you like a child at midcourt twice a game for forgetting to call a ghost foul on the other teams best player. Your dirtball slickback and dark, soulless eyes are already a big enough indicator of corruption, so at least do us the favor of calling fouls in a normal amount of time. I’d prefer to just remain suspicious that you’re screwing my team, rather than blatantly know it.

P.S.   If you think this is just in reference to this third quarter call, its not. I tweeted this somewhere around the second quarter. Can’t even remember which blatantly bullshit call it was.

how much does Pat Riley pay Ken Mauer on yearly basis? Over/Under 2 million?