Can’t Get Enough Of The Dan Patrick – Colin Cowherd Feud 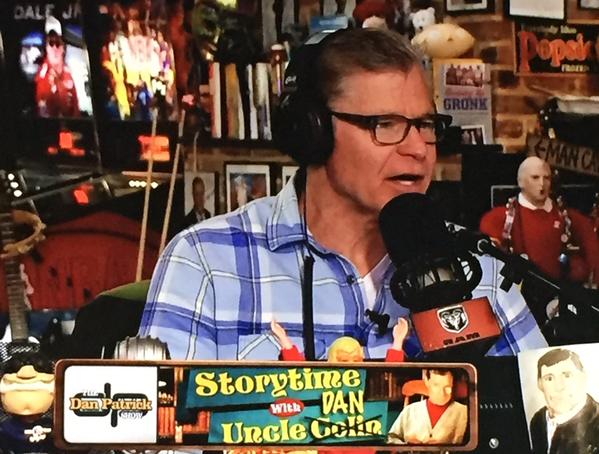 Awful Announcing  —  Colin Cowherd has been under a bit of fire since moving from ESPN to Fox for having a couple bits that are suspiciously similar to his competitors.  One of those is Fox displaying a “Storytime with Uncle Colin” graphic that was a clone of The Dan Patrick Show’s longtime “Storytime with Uncle Dan” graphic.  Well, the DP Show gang got the last laugh by showing this on Monday morning, a cheeky jab at Colin Cowherd in a continuation of the rivalry between the two.

I’m not a Cowherd hater. He basically carries a three hour talk show by himself every single day. To do that you need to think of things a different way, and he does that. Do I agree with all of his takes? Of course not. As time has gone on I’ve agreed with him less and less. But I can respect where he’s coming from, and the work that goes into forming opinions that are both coherent and controversial to fill a three hour solo show. I totally get why people hate him, but there are very few people who can do what he does*, so I give him his due.

But when it comes to this feud? Fuck him. I don’t know how anyone can be on his side here. I mean the only reason this is a “feud” is because of the random, out-of-nowhere shots he’s taken at Dan Patrick, plus all the bits he’s taken from DP, Russillo, etc. I do love that DP has responded though. It really is phenomenal. Just taking subtle little jabs here and there, quietly poking Cowherd to remind him that he’s not afraid to go down and play in the mud to Ether the shit out of him again. DP is the best in the business and it’s not even close.

*Bomani Jones is actually one of those guys. Like Cowherd, he looks at things differently and puts a ton of thought into each subject and comes up with a unique take that will make you see things from a different perspective. He and Cowherd usually reach much different conclusions, but they’re the same type when it comes to thought-provoking takes that border on hot takes.