Even When Roger Goodell Loses, He Wins… Deflategate Dominated The Entire Summer, And Now It’s Week 1 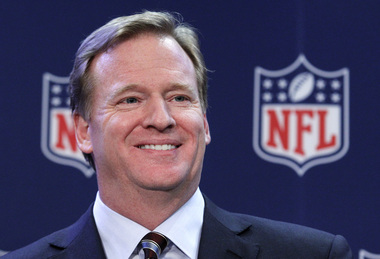 Well would you look at that…

Look, I don’t want to sit here and toot my own horn, but I called this from day fucking one. I said on May 12th, the day the suspension was handed down, that this was all a publicity play from the NFL. This was a purposeful overinflation (pun fucking intended baby, OH!) of a potential scandal to raise ratings and public interest in the NFL. It was all a PR play by the NFL.

They recognized this as a major story that didn’t involved Concussions, HGH, Domestic Violence, or any of the real black eyes on the league.

They recognized that it involved the most famous Quarterback, a Coach always at odds with the media, the most polarizing Franchise in the league, and the most provincial, loud, whiney fanbase in all of sports.

They recognized this as something they could drag out through the summer to keep the NFL in the news cycle to steal ratings and viewership from the NBA and MLB.

So they ran with it.

And guess what… it worked. It worked very fucking well. Because now we’re one week away from kickoff having spent the entire summer talking about the fairness and independence of an investigation into FUCKING AIR PRESSURE IN A FOOTBALL DURING A BLOWOUT BASED OFF OF A FALSE REPORT LEAKED FROM INSIDE THE NFL instead of the league’s competition (NBA and MLB) or the real issues (Concussions, HGH, Domestic Violence, Substance Abuse, etc). SIt doesn’t even matter how all the legal side of this played out, because even if the suspension remained, we’d still be here talking about it. The NFL made it through another offseason skating those issues, and did so while making everyone believe that they “lost” this decision.

Which of course they didn’t.

Sure, Roger Goodell and the NFL “lost” this court ruling. And yeah Roger looks a little more inept in the public eye. Do you think he cares? Fuck no. Because that’s his job. His job is the make money for the league, increase ratings and corporate partnerships, and be the public punching bag for carrying out the owner’s wishes. And as Thursday’s ratings shatter the record books… and Brady jerseys sell by the boatload… and stadiums fill up for every Patriots away game… and people play Draftkings and Fanduel because they think they are the only ones smart enough to pick a vindictive Tom Brady… and media coverage of every potential league scandal increases… and sponsors continue to pay top dollar… and regular season and playoff TV ratings skyrocket… Roger’s power grows.

In the end, I’m happy to see Brady get off. The whole investigation clearly was bullshit, and he was getting railroaded just for the sake of everything I said above. I’m glad that my best friend Eli Manning is still the only person to beat Tom Brady, and I look forward to watching him do it again in February. Good for Tom. But don’t think for a second that the NFL or Roger Goodell came out of this thing as losers. Because even when they lose, they win.

P.S.   Not really going out on a ledge here, but it’s a mortal lock that Roger appeals this. Gotta extend Deflategate coverage into this next week to overshadow the upcoming Concussion movie and the fact that the NFL changed the script to remove scenes that make them look comically evil. Classic Roger.