Yes, Eli Manning Should Be The Highest Paid Player In The NFL This Season

ProFootballTalk — With Ben Roethlisberger, Russell Wilson, andPhilip Rivers each getting new deals with one year left on their prior ones, there’s one big-name quarterback entering his contract year… Giants quarterback Eli Manning has one year remaining on his second NFL contract. The Giants want to extend the deal before the start of the regular season. Manning reportedly wants to be the highest-paid player in the league. That’s the word from Ian Rapoport of NFL Media, and it’s not surprising. Here’s why. More important than Manning’s base salary of $17 million in 2016 is his cap number of $19.75 million. So if the Giants use the franchise tag on Manning in 2016, he’ll make 20 percent more than $19.75 million. Which (abacus engaged) equates to $23.7 million. Which is $1.7 million more than the current high-water mark of $22 million per year, set by Aaron Rodgers in 2013. And that’s assuming the Giants simply use the non-exclusive version of the franchise tag. If they go exclusive, the number for 2016 will be closer to $25 million.

So why wouldn’t Eli want more than $22 million on a long-term deal? While it can be spun by the team that he’s looking to be the “highest-paid player in the league,” the truth is that Eli is simply trying to take fair advantage of the leverage his current deal creates. That leverage consists of another 20-percent raise in 2017, when his franchise tender would be $28.44 million under the non-exclusive tag and roughly $30 million under the exclusive tag. That’s a $50.44 million minimum and a $55 million maximum over two years.

So why should Manning do a long-term deal that pays less than $50 million over the first two years? If that $25 million per year annual average makes him the highest-paid player in the NFL, so be it. It’s not Manning’s fault that no one else has managed to exceed the $25 million barrier. Besides, what alternative do the Giants have? They can pay Manning based on what the tag would give him in 2016 and 2017 — or they can roll the dice on trying to find another competent quarterback in a league without enough of them. In other words, they can continue with Manning, or they can return to the revolving door that churned out the likes of Kerry Collins, Jesse Palmer, Kent Graham, Danny Kanell, and Dave Brown in the decade between Simms/Hostetler and Eli.

People get how the NFL works, right? Quarterbacks will always make the most money. That’s what happens. Every single year, the group of Quarterbacks that are up for contracts will get paid more than the last group. You know why? Because they have the leverage. And that’s exactly what Eli has here. Leverage. There are three options here: 1. Franchise him for two consecutive years, paying a total of $55 million. 2. Let him go after the year, which we all know isn’t happening. 3. Sign him to a long-term contract that pays him enough yearly to forgo the potential $25mil and $30mil franchise tenders over the next two years.

That’s the leverage that not just Eli, but every competent Quarterback has created. Eli has just done it better. It’s not his fault that the system has allowed other Quarterbacks to raise the market value. He’s just taking advantage of it. And next year Andrew Luck is going to get paid more than him. And then Aaron Rodgers will get paid more than him. And so on and so on. Because until competent starting Quarterbacks cease to be a rare commodity, they’re value is only going to go up. So pay this man his fucking money already. “Highest paid player in the NFL” is just semantic for people jealous of Eli’s boyish good looks and cannon right arm and jeweled-up fingers.

And you know what, forget all of the (clearly reasonable) talk about leverage. Let’s just be real here…

Eli is about to light the league on fire this season. Straight up hellfire all over the NFL. Touchdowns on touchdowns on touchdowns on touchdowns. Probably throw for like 5500 yards, no biggie. 57 touchdowns or something like that, 25 of them to Odell. 75% completion percentage, 80% in fourth quarters. Zero interceptions, except those three that bounce of Rueben Randle’s hands that don’t actually count against Eli. One perfect deep ball to James Jones per game. Two perfect deep balls to Victor Cruz per game. And about a million beautiful checkdowns to Shane Vereen that will make you say, “Wow, Eli is running this offense like a fucking wizard out there.” What are his MVP odds? +4000. Cool, where can I put my life saving on that right now?

I think those are fair expectations for Eli this season. Oh and if the offensive line sucks then it’s not Eli’s fault if he doesn’t hit those numbers. Best quarterback in the league can’t do anything if he doesn’t have a pocket, everyone knows that. 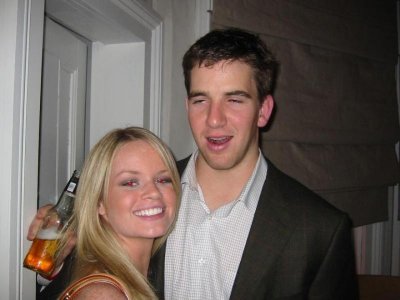