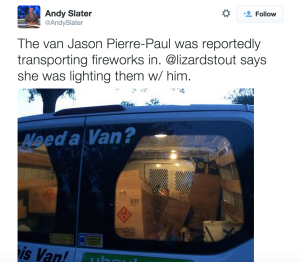 JPP suffered a hand injury Saturday night while attempting to light fireworks. He required hospitalization. Rapoport reported JPP’s hand will be intact, and as of Sunday night, doctors were still examining for nerve damage and other issues related to the incident.

Given the timing of the event and the apparent judgment displayed, the Giants do not believe a long-term offer is in the best interest of those involved at this point, per Rapoport.

Big Blue’s decision is not expected to alter the current situation, however, since the defensive end was not planning on accepting the deal prior to the July 15 deadline for franchise tagged players to reach extensions.

The Giants are still in the process of doing due diligence to learn the specifics of the injury and any possible effects.

A Giants spokesman told Rapoport: “Our first concern is for JPP’s well-being.”

Pierre-Paul earned 12.5 sacks and three forced fumbles in 2014, starting 16 games for the first time in his career.

Little good news bad news here for Jason. On the one hand, you still have all your fingers*. On the other hand, you never signed that $15 mil franchise tender and now the Giants just pulled out of their $60 million contract offer. Oh and you’re the laughing stock of the sports world. That too. That kind of sucks. But yeah the money is worse. Hope those fireworks we’re that expensive. You know, since you might never make money again.

*High fives self for hand pun. And for having two working hands*

And the answer is yes, I am pretending that the Giants Defense will be totally fine this season. We can totally afford to lose our best pass rusher. Secondary is loaded. Linebackers are studs. Nothing to see here. We’re good. Trust in Spags. Everything is fine.

It’s funny because his hand is melting off, right? RIGHT?